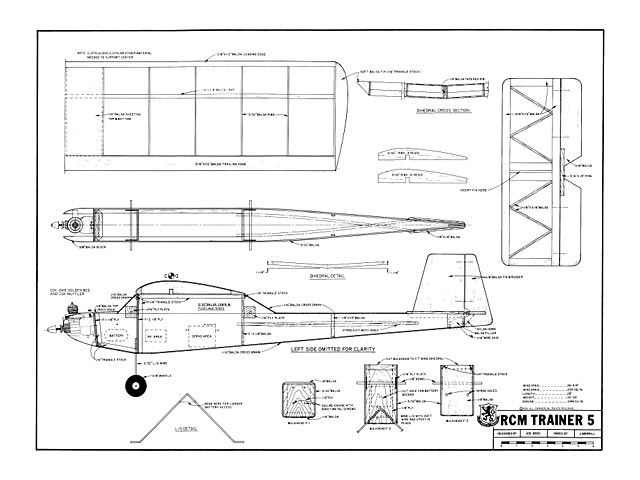 Quote: "Working together several years ago in response to the need for a sturdy, predictable trainer that would do more than just fly big circles in the sky, Don Dewey and Joe Bridi hatched the well-known RCM Trainer 60 (oz7802). Since then, requests from R/C flyers stimulated the development of the RCM Trainer 40 (oz6465), RCM Trainer 20 (oz7631), and the RCM Trainer .10 which can be built in either a high or low wing configuration. Now, their RCM Trainer 5 makes its debut.

The 5 is intended to be a flying for fun schoolyard type R/C model airplane. While a radio using servos (especially the new tiny jobs) fits easiest in the design, offers the greatest flexibility in installation, and is usually lighter than a brick, a brick can be used with a simple modification we'll discuss later. For power, a Cox QRC .049 or Cox Tee Dee .051 with a fuel tank engine mount is recommended.

Preparations. Begin by building yourself a kit. That means cutting the fuselage sides. ribs, bulkheads. rudder, nose blocks, cabin sides - which are slanted at the front and back - the elevator halves, and wing center tapered piece. Don't cut the wing center tapered piece to the wing contour. That's more easily done later when the wing panels are joined. Also cut out the fin. When you do so. note that the bottom edge of the fin extends down into the slot provided in the stab for a strong glue joint.

Incidentally, if you have only one set of plans, an easy way to do the job of cutting out these parts accurately and easily is to Xerox the parts of the plans needed for the parts. Cut out the parts from the Xerox copy. coat the back side with rubber cement. and stick them to the wood. After the parts are cut out, simply peel off the paper and rub off any excess adhesive residue. Easy.

Final preparations include marking and drilling the pilot holes for the engine mount screws in bulkhead #1 and the holes for the NyRod pushrods in bulkhead #3. Also mark and cut the battery compartment access hole in bulkhead #2. Two ways of bending the landing gear wire are shown on the plans. While the version with the 90 degree' bend at the center is recommended to provide a more sturdy mount, the alternative version may be used if the battery compartment access hole must be larger than the cut-out shown on the plans..." 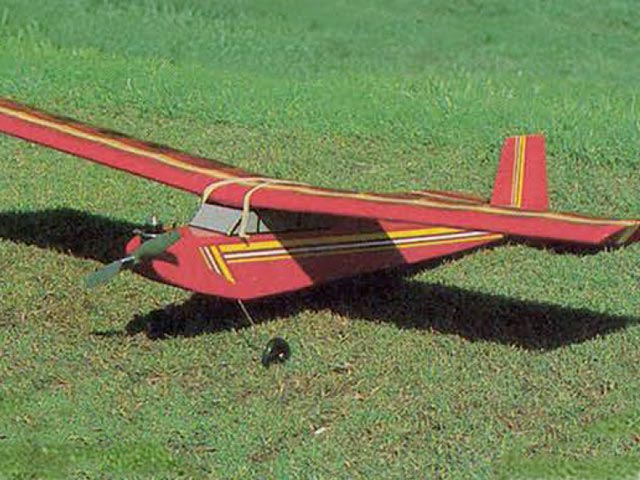