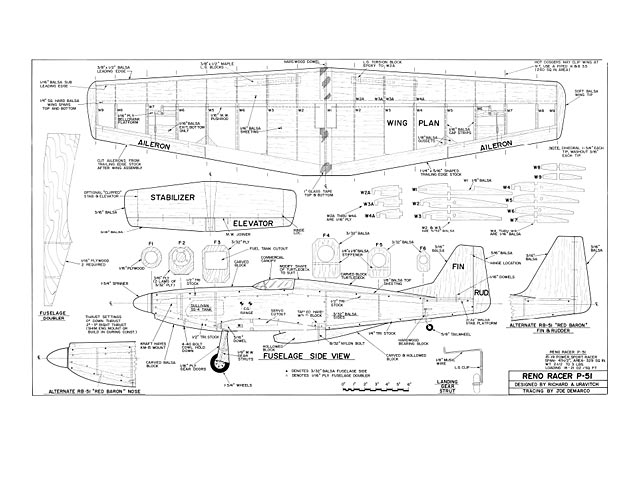 Note the model is styled after the John Crocker 'Sumthin Else' racer. Supplemental views on the plan show the required nose and tail mods to produce a model of the RB-51 'Red Baron' Griffen-powered racer.

REMEMBER BACK in April of '82 in my T-6 article when I mentioned that everyone wanted to be a '51' pilot - but should really start with the T-6? Well, enough of you bought the plans, and House of Balsa produced the kit, so I've got to assume that now, a year's flying later, you're ready to make the transition. Here it is, folks, the answer to your dreams, your vicarious thrill machine, the all new Reno Racer P-51!

It's not a run-of-the-mill, precision-scale, full-cockpit .60 to .90 version, but rather an expansion of the original 'penny-pinching pylon' concept. It's not a legal Quarter Midget - in fact, it would hardly be competitive - but against others of its own breed, fun abounds! The performance difference between the P-51 and the T-6 is negligible. They are both aerobatic, easy to build, and economical to operate.

There are several variations of the P-51 you can make (see box), however, you can complete 90% of the airframe prior to making a final decision as to which version you want. Interested? Hope so...let's get started!

Building the airframe is straightforward and, sequenced properly, will save some time. It goes very quickly and, in fact, took me only three evenings for complete framing. I'm a recently converted strong advocate of the cyanoacrylate method of construction. These super glues can really accelerate building time, in addition to providing stronger bonds than other types of adhesives. I personally prefer the Zap line of products because they are a kind of system approach and provide a variety of curing times from 10 seconds to nearly a minute, any of which can be accelerated by use of their Zip Kicker. It's really neat stuff.

WING PANELS: Start by pinning the 1-1/4 x 5/16 inch shaped balsa trailing edge stock over the plastic-wrap covered plans. Waxed paper works also, but in some cases the glue will bond to it when you remove the wing panel from the building board.

Now fit and position the lower cap strips, the lower leading edge/ center section sheeting, and the lower 1/4 sq main spar into position. Zap all the joints. Pre-assemble ribs W2, 3, and 4 by adding 1/16 ply W2A, W3A, and W4A stiffeners. Note that only W3 is capped on both sides. Install ribs W2 through W9A and B.

Temporarily wedge a piece of trailing edge stock under the leading edge sheeting and note that this brings the sheeting into contact with the ribs. Zap all ribs in place. Slide the hardwood landing gear blocks into position..." 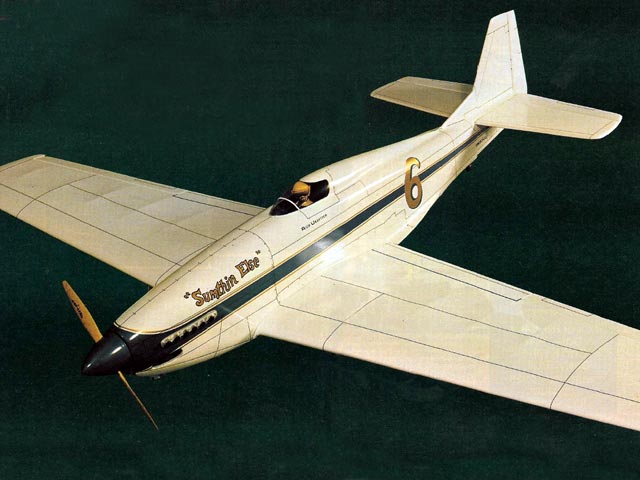