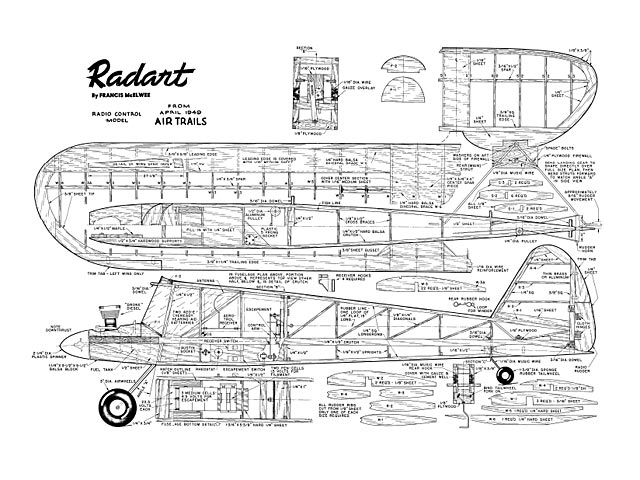 Quote: "A noted stunt flyer turns to radio-control with remarkable results which you can duplicate. Here is his story and model. Radart, by Francis McElwee.

HERE is a model designed for radio flying, which is not merely a converted free-flight. It employs structural features proven through the years. in the free-flight field. Simplicity and ease of adjustment are paramount. Much thought went into the design, and if it's to be your first radio-controlled ship, it is suggested that the plans be followed very closely.

In the past six months, in the neighborhood of 200 flights have been put in. The ship has been well proved, both for its strength and consistency in flight. General specifications are: wing span 60 in; area 4 sq ft; length 42 in; weight 4-1/2 lb; power is Drone diesel; prop is 10 x 6.

A high wing loading (18 oz / sq ft) plus a Clark Y wing section makes the model fairly fast so it can be flown in stiff winds. This has been proven many times when the author flew this model out of small ball-fields in windy weather. This is a great help in the operator's judging for 'close landings as the glide is fast and steady and the descent is at a good, even, steady rate.

The fuselage, while a box, has a slightly different construction than usual and efforts were made to retain real plane looks. The radio equipment has to be accessible and the fuselage has to be able to take the beating that it is subject to through continuous flying under varying conditions.

It is built around a crutch, which also separates the receiver from the batteries for crash protection, and has so called skyscraper mounts for ease of power adjustments. The rudder is permanently attached so the ship is always in trim. No electrical or mechanical connections are taken apart. Wing and elevator are adjustable and keyed. Down thrust is built in. A long rubber motor for the escapement was deemed neces-sary and one winding is usually sufficient for the day's flying. To rewind, it takes but a minute to take the elevator off (four rubber bands) and wind the motor through the opening below the rudder.

The wing and elevator are conventional, though constructed extra strong for violent maneuvers and to resist warping.

The radio is a stock Aero-Trol unit and no trouble has been experienced to date. Anyone who can wire up an ignition engine can follow the Aero instructions without difficulty.

The power used is the older version Drone diesel. This engine has power to spare and had to be slowed down with the free-flight choke and a small, inefficient propeller to give the climb desired, which is very shallow. The slow climb gives a smoother looking flight as it goes gracefully into and out of turns. No space nor weight is needed for ignition when using a diesel and no flight timer is needed; vary your fuel supply to limit the engine run. However, any class 'B' engine would do; a 'C' would be much too large for this type of flying in this particular ship. In the way of contest performance, the first day this ship was flown by radio, it took second in a meet on Long Island. A month later, with plenty of practice in that time, it took first in the Mirror meet.

Unable to attend the Nationals, I lent the ship to Leon Shulman, who with no former experience with this craft, took fifth at Olathe as a team entry.

Everything is stock equipment and the plane was constructed on a kitchen table in a two-room apartment. No special tools are needed other than those the average gas-model builder might have.

For those who desire to get to work immediately, the plans are marked off at 1 in intervals to facilitate enlargement by the graph method. However, Air Trails' full size plans will save you all this work.

To start on the fuselage, cut out the outer mounts of hardwood, maple is fine..." 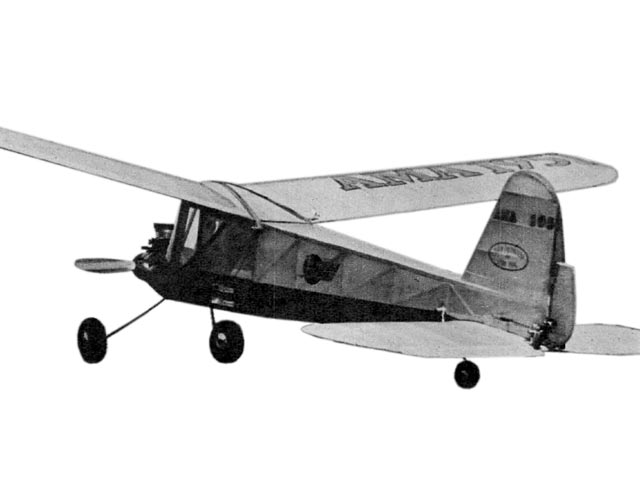