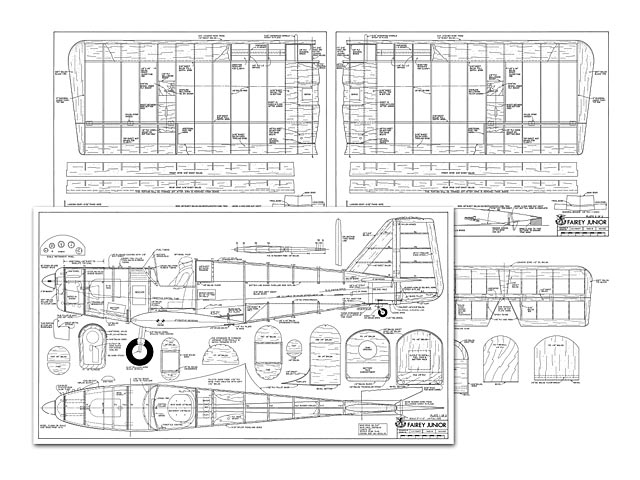 The Junior was a first scale model. In this respect, it is perfect. Simple, practical construction - absolutely no need to deviate from scale in any way, and so relaxing and realistic to fly - these are its characteristics. The formula of 8 lb in weight, 1000 square inches of wing, and a smooth reliable .60 will enable any average pilot to compete in scale class with a flight pattern of which he can be proud.

My original model still exists, now three years old and, while in a rather sad stage, is still in use as a club trainer. It has in fact, survived a motor failure, while doing a long slow inverted pass, 6 feet from the runway! I have since built other scale models, much more complicated, more detailed and more time consuming, but none yet has produced the satisfaction of that so smooth, so slow, flight of The Junior.

It was during a social visit to a full-size flying club that I first saw the 'Junior'. My immediate impression was that it was nothing more or less than an overgrown model, and why, I reckoned, shouldn't a reduced size version fly in a similar manner? The owner kindly gave me all the information necessary and, together with this and an ancient 1/36 scale three-view drawing, I drew up these plans for a 1/4 full size Junior.

It was my opinion at that time and, in fact, still is, that the only way I, or any modeler in a similar position, could compete successfully in the scale class was by keeping the subject simple, practical, and exact. If all dimensions and details are correct, no matter how simple the subject, a fair judge must award good scale points, and a steady realistic and reliable flight pattern should produce a higher score than maybe a spectacular, but nevertheless, frightening, overloaded handful of 'sudden death.' This was perhaps borne out at my first scale competition which was the British Nationals. I achieved 6th highest flying points, and the Junior finished 9th overall, in what thought was an entry of very high standards.

So, on to the original aircraft which, for those interested, was designed by a Mr OE Tipps (hence Tipsy) who had been connected with several successful ultra-light aircraft since the middle thirties. The Junior was an attempt by Fairey Aviation to provide cheap club flying for the thousands of war trained pilots who wished to continue flying for fun, and it was estimated that this could be done for £2.50 per hour. (I can't fly R/C for that!). I have been unable to trace the exact number that were built, but the project came to an end prematurely, and to my knowledge only two now exist, one in a museum in Belgium and the other G-AMVP, which is privately owned and on the British Register. The latter is the subject of this article.

Construction (or how to get a little 'Tipsy' without a hangover.) The construction as shown per plan can no doubt be simplified, but if built in this manner, the result will be a true scale model. The number of longerons, formers, rib spars, etc., are exactly as per full size as are the areas of sheeting. Even so, the suggested methods should not trouble anyone with sufficient interest (insanity) to consider a scale job.

The fuselage sides are out from medium soft 3/16 sheet and the top edges pinned to a true board. Epoxy the firewall and white glue F3, 4, 5. 6, and S into position. If you have any doubts about the fuselage sides conforming to the contour required, forget it. By selecting the right balsa and wetting the outside surface, this is easily accomplished. Leave overnight to set, allowing F2, 3, 4, and 5 to overhang the board and ensuring the rear top edges are in contact with the board..." 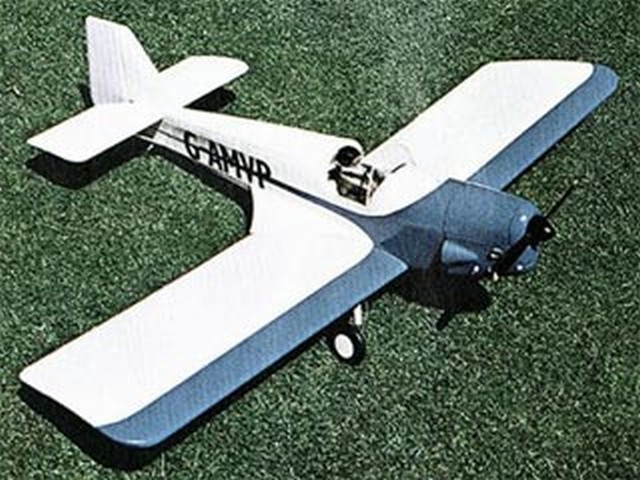