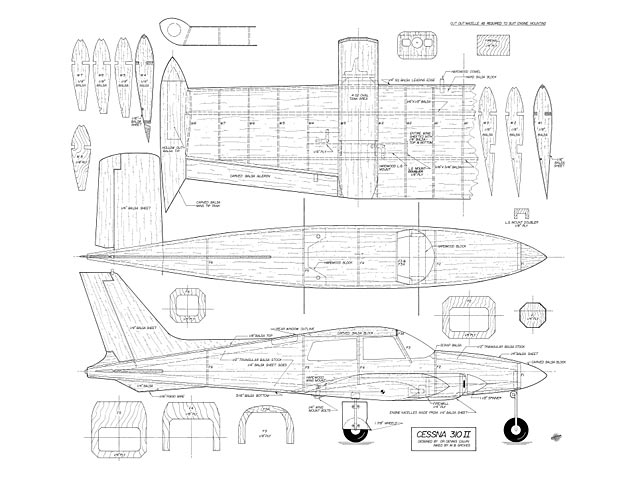 Quote: "This is a Stand-Off of Cessna's popular 310 II, a twin-engine private plane that has become very popular over the last decade.

I had several things in mind when I decided to build the model. I wanted it small so it would fit into the back of my Corvette and it had to be easy to build. An added advantage of the twin is the fact that the windows aren't subject to as much oil and grime, and the fuselage stays much cleaner.

The idea came last summerwhile I was flying at the local R/C field. It was obvious that everyone was involved with the same old 30-size planes using a 60-size power plant. I was flying a Cessna 177 Cardinal, the spectators wanted to take pictures of my craft while paying very little attention to the other models. I decided I wanted something even more attractive, something that could be seen at any airport.

I began looking through my flying magazines and found a picture of a 1975 Cessna 310 II. It was a double page, sideview advertisement in full color. I drafted all the views I, thought were necessary. I am not a draftsman, but I had an idea of what I needed.

Everyone has a starting place when they build. I have to start with the wings or I'll never get around to them. After the wings, the vertical and horizontal stabilizer. I always tackle the fuselage last. Everything needs to be custom-fitted. Normally I'll start finishing the wing while I'm waiting for the fuselage parts to dry. A really fine finish can be achieved with resins, although I don't like sanding it. Accepting this aversion, I talked my girl friend into doing it. She disliked it enough to buy me an electric sander. The sander is fantastic.

The wing is the hardest part of this model because the engine mounts and fuel tanks are in the wings. The fuselage is very simple and straight forward. When you approach the finishing stages you can design your own color scheme or go to your local airport and find a Cessna 310 to copy.

WING CONSTRUCTION: Cover the plans with wax paper so the bottom of your wing won't stick. Pin down the main spar, the trailing edge piece in front of the aileron and the hardwood landing gear mount. After cutting the ribs, glue them in place. Use the plan for positioning. Now add the leading edge and the support stringers across the top of the ribs. Note the tip rib is made of 1/8 plywood. Add the 1/8 plywood supports around the wheel mounts and install the 1/8 ply mounts for the bellcranks. Mount the bellcranks when this assembly is dry. Sheet the top of the wing and allow this to dry. Turn the wing assembly over and sheet the bottom side and let this dry. Now is the time to hinge the aileron and install the control horns. Cut a hole in the top sheeting for the four ounce fuel tanks. This wing-hole will be inside the nacelle...

WING TIPS: I carved the wing-tip tanks from two blocks of soft balsa (1-1/2 x 2 x 12). After sanding to shape I cut off the front and drilled out the tip so it would be hollow. Glue the front piece back in place and sand it to final shape. It's time to glue it in place.

NACELLES AND ENGINES: The nacelle sides are cut four at a time from 1/4 in balsa to match the plans. You'll have to custom-cut the wing saddle for the nacelle to fit the wing. Glue the 1/4 in plywood firewall and the front nose piece together over the plan. Now glue the top and bottom in place. After this has dried you can sand to final shape and cut for the engines you plan to use. I used two Enya 15 III TVs mounted on two Kraft Hays #19B motor mounts with Du Bro Mini Mufflers. This system worked very well. You are now ready to position this structure over the hole in the wing with the four ounce tanks in place. After drying, cut a hatch and install the linkage and fuel tubing.

Join the two panels with epoxy and let it dry. Cut the openings for the aileron and throttle servos. Finish the wing.

Finishing is a matter of personal taste. I use K&B Super Poxy Resin and paint. I've always had a great finish.

RUDDER, VERTICAL FIN, ELEVATOR AND HORIZONTAL STAB: These were cut from 1/4 in balsa and sanded to final shape. The rudder is then separated from the fin, hinged and set aside. Do the same with the stab sections. These parts will be finished with the fuselage.

FUSELAGE: The fuselage on this model is a box-type and will require a bit of carving. It's easier than most because you don't have to install a motor, or a fuel tank. Remember, with the motors on the wings your clear windows will be almost oil free.

Construction starts by cutting the sides from 1/4 in balsa sheet; at the same time I cut the 1/8 plywood bulkheads. Clue the 1 in triangle to the fuselage sides in the areas shown on the plan. Position bulkheads 2 and 5 as shown; when these are dry add 3 and 4. Allow these to set, then on to bulkheads 1 and 6 and glue the rear fuselage sides together. Now you can add the top sheeting. The top and the bottom of the nose are 1/4 in sheet.

From this point I then added the nose wheel bearing, wheel strut, steering arm and linkage. Run this linkage to the servo area. Custom-fitting can be accomplished later. Now add the bottom sheet, the front nose block and the wing-mounting hardwood parts. While you're allowing this to dry, you can send the children to their rooms and have them close the doors, because it is time to get out your spokeshave to start hacking on this chunk of balsa. Cut until you feel that it looks like a Cessna 310, then sand to final shape and cut out, the rear window area.

You are now ready to add the finished stabilizer and fin. When you are doing this you should make sure that it is exactly parallel to the body. Add all of your linkages, run them to the cabin area so they can be attached to those little electric boxes with output arms. Cut the underneath vertical fin and insert the 1/16 wire as shown on the plans. Glue into place.

RADIO GEAR: Any good four channel radio mounted to the manufacturers specifications should prove very satisfactory. In this model it will be necessary to mount the throttle and aileron servo in the wing. The access to the wing servo will be in the top of the wing. The elevator servo and rudder servo coupled with the nose wheel, are mounted in the fuselage. Always mount your receiver behind your battery and mount the battery so it will balance the model.

When you arrived at the field with this little ship you'll be sure to have everyone's attention. It's a real crowd pleaser and a beautiful twin Cessna."

Update 13/03/2020: Replaced this plan with a clearer copy, thanks to dfritzke. This one also has a better layout. For plan as printed in the magazine, see supplement 'previous' file. 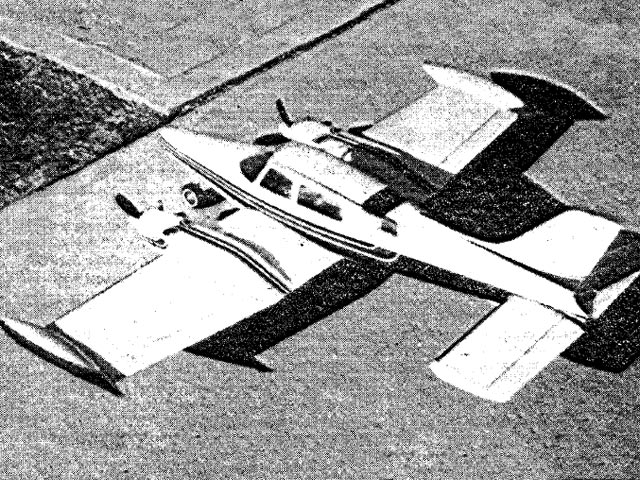