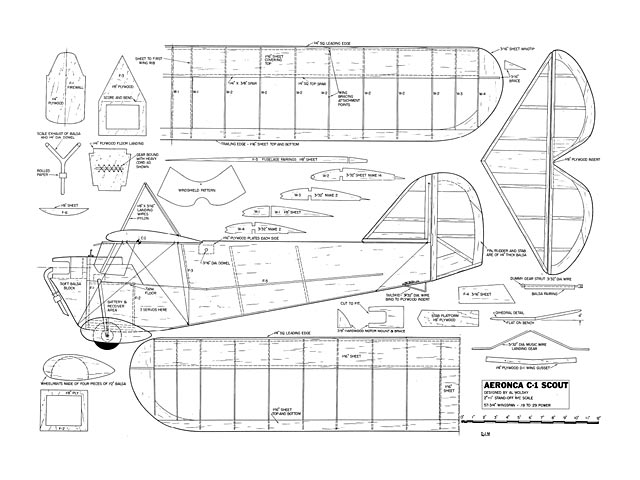 Quote: "A Stand-Off R/C oldie that captures an age. An easy aircraft to build and mild mannered in flight with a .19 for power. Aeronca C-1 Scout, by Al Wolsky.

The 'Golden years of aviation' are usually referred to as the decade of the 30's. During that period aircraft were designed in which the designers had high hopes, but when placed on the market they did not sell well. Many such companies and their designs dropped from the scene leav-ing only an example or two around. Dope and fabric with wooden spars was the thing. Usually the planes were slow and underpowered by today's standards. One such type of lightplane as presented here, of which one was built, was the Aeronca C-1 Scout.

In 1929 the Aeronca Aircraft Co was formed and went into production with the C-2 which was designed by Jean Roche. It was an immediate success even though the country was in the midst of the depression. Its two cylinder engine burned two gallons of gas per hour. Cost was $1495. 164 C-2's were built between 1929 and 1931.

In early 1931 the company felt there was a market for a faster more highly maneuverable C-2 type plane for air racing and air show aerobatics. The C-2 airframe was changed by reducing the wingspan from the 36 foot C-2 wing to 29 ft 4 in. Fuselage was beefed up by using heavier steel tubing and a slightly larger engine was installed. Advertised as the C-1 Scout, the first plane serial number X-1129 was completed in March, 1931 and test flown.

Performance was beyond expectations. The price was to be a low $1245. The company general manager would put the little ship through what seemed to be many reckless stunts during various airshow demonstrations. On September 12, 1931 during his usual antics he went into a rear vertical bank and the plane slipped and slammed into the ground. The pilot was killed and the aircraft destroyed. After this accident the company lost interest in the little plane and it was never put into production.

Fuselage Structure. The fuselage has a basic triangular shape from the cockpit back and can be built in your hand. No top view is needed since the length of bottom cross-pieces are given on the plan side view.

Start with two 1/8 x 6 in balsa sheets of equal strength and cut two sides from the side view. The sheet will be slightly short at the bottom so use the pieces cut from the rear to add on where necessary. Slightly shave the inside top of both sides back to the tail and glue these together. Cut the firewall, gear mount and other formers from materials as called for. Glue the 3/16 sq stiffeners to the inner surfaces as shown. Next, with a razor slightly score both sides so they can be pulled in to the firewall and former F-2..." 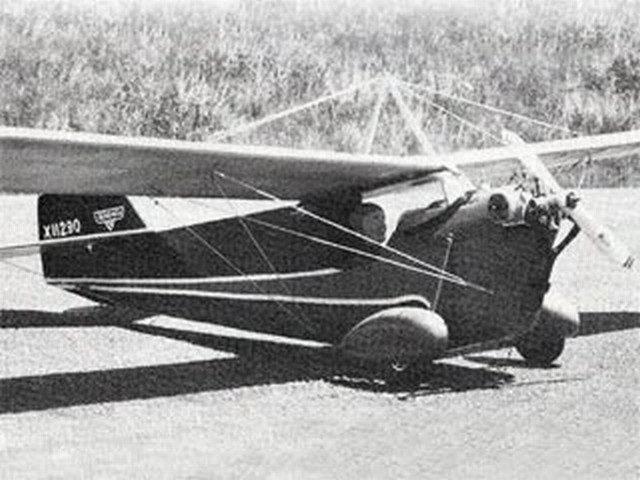