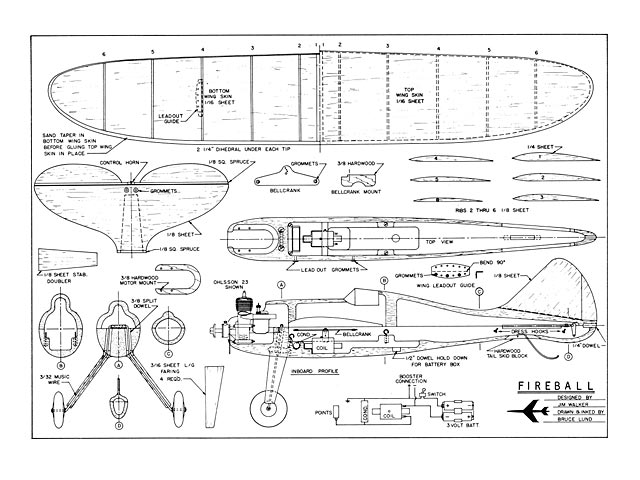 Fireball. Control line sport model. The Fireball design dates from 1940 - this is a later reprint in AAM from December 1971.

Quote: "Fireball. In 1940 the immortal Jim Walker turned the modeling world upside down with the invention of U-Control. Here's authentic plans of the plane that did it - still a pretty fair stunter. By Bruce Lund.

While rummaging about the attic for some items, I came upon something that really brought back memories. Covered with years of dust, but still recognizable, was my first U-control model - Jim Walker's Fireball. The dope was cracked and faded, the rubber wheels rotten and the canopy had turned yellow with age.

It had been almost thirty years since I had given up free flight to try this new-fangled type flying called U-control. It was so new that no one in our area knew anything about it.

As I remember it, this kit was of very good quality. The fuselage was rough carved inside and out, the tail was cut out as were all other parts. The parts were not die cut, but were saw cut. The wing skins were printed with rib locations. No plans were provided as such; however, a pictorial sheet was supplied showing each construction step, picture by picture. It was sufficient.

Flying UC in the early days was a real challenge. Remember, this was before anyone thought of engine offset, weighted wing tips and wedge fuel tanks. Just getting this engine cranked was a challenge in itself. The old ignition engines could be real cantankerous at times. They were heavy and under-powered, had low rpm, and required the added weight of the coil, condenser, switch and batteries. Our fuel consisted of 70% white gas and 30% outboard motor oil.

If one could get the engine cranked, take off, fly straight and level till the fuel was depleted and survive the crash landing, he had done something to be proud of. You may laugh, but I can remember when I won a contest by looping my Fireball.

As experience was gained, all of this changed. Jim Walker worked with the design for quite some time. When the two-speed engines became available, he started his 'Sabre Dance' routine, letting the model hang by its prop and move back and forth at will. An even more unbelievable feat was flying three planes at the same time - one in each hand and one tied to a football helmet. He also flew from water with single-float and twin-float Fireballs. Jim Walker really started something. It's too bad he isn't around today to see how model aviation has progressed.

While reminiscing with my friends, I found that some of them didn't know what a Fireball was - especially the younger fliers. Over the past few years I have noted several letters to the editor in magazines asking questions about this model. I decided it was time to do something about this and let the present generation in on a little model aviation history. It would mean disassembling my model to obtain patterns from which a set of plans could be drawn, but since the model was not flyable in its present condition - why not? If any of you choose to build the Fireball, it is sure to stir up a lot of discussion on the flying field..." 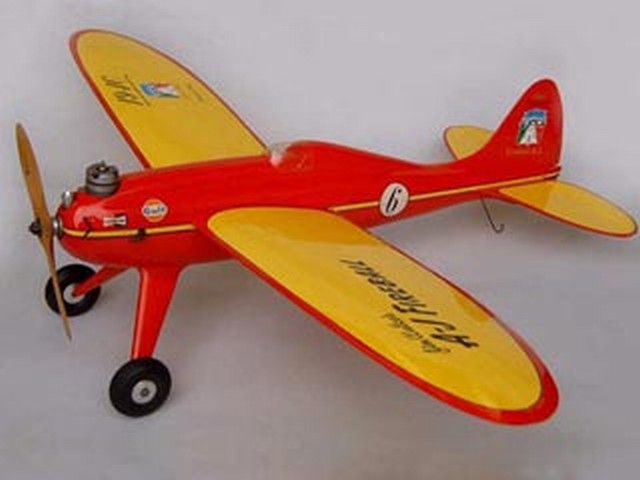 Photo of nicely completed Fireball model was found online at http://www.modelflight.regheath.com/mf105/galleryset.htm
SteveWMD - 29/07/2014
Mary, Some pics attached of an American Junior ( Jim Walker ) Fireball. This is from a set of original drawings with additional information from your oz5746 plan. 1939 version with the large fin and painted canopy. Ohlsson 23 sparkie powered. Keep up the good work and stay safe. Very best regards ,
TrevorTabor - 14/04/2020
Add a comment