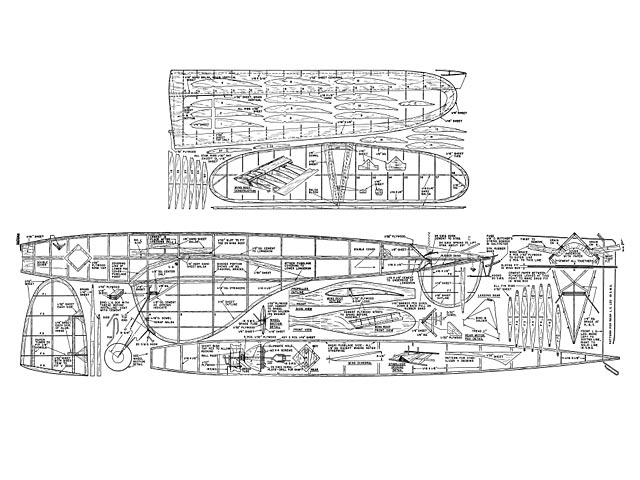 Jaguar. Wakefield competition winning model designed by Ted Evans. The Jaguar (oz584) design first appeared in Aeromodeller, 1948. This here is the Jaguar as it appeared in Air Trails, 1949.

Quote: "THE winning of the Wakefield Trophy, has always been - as to many others - my ambition. The possibility of the British Trials taking place during 1947 gave me food for thought.

During my service in the RAF modeling for me was very limited, but at least nothing could prevent my weighing the finer points of Wakefield design. Decisions were made for the 1947 entry over a period of some months and eventually the design was completed. Factors governing the design were: high power-to-rate ratio, practical streamlining, freedom from gadgets, and a large structural safety factor.

The original Jaguar was made and test flights indi-cated that things were going well. The glide was particularly pleasing. Turns of around 1,050 gave me a power run of about 90 seconds. Successes came in thick and fast, and although the Trials were not held that year I managed 2nd place in the Gutteridge Trophy Wakefield Contest which I won in 1948. Friends of mine made similar models and things were getting hot for me to handle, but that's how it should be.

The 1948 trials were flown in the worst weather I have ever known ; the wind was almost frightening. Roy Chesterton came out on top after handling his Jaguar with great skill. A three-piece wing didn't help me much, caused through landing in a tree at 45 mph, and trying to beat the clock on the repair was asking too much.

When Roy left for America I knew that this model was capable of winning the Trophy, though contest flying is too treacherous to bet your shirt on.

The story of his flights makes interesting reading - the consistency proves beyond all doubt that it was a fair result, which has not always been the case. Competition results over the past 18 months for the Jaguar model shows form which is not easily over-looked.

Building the Jaguar is not over difficult, but results will be in proportion to craftsmanship and knowledge of trimming. Average duration should be between 4 and 5 minutes because we manage that in England in our dirty weather. Thermal soaring seems to be too easy, but the high normal duration will be more reliable.

Fuselage: This is made on the box principle and accuracy here will give you a correct start. Note that some of the cross pieces are 1/8 x 1/16 and are used both flat-wise and edgewise. It is recommended that one side be built over the other to produce precision accuracy. Leave the longerons an inch or so over at the front end which will be useful for binding a rubber band around when assembling the sides together. A pin pushed through each will prevent the band rolling off. Select your wood with care, rather harder for the longerons, and cross-pieces at the front.

Sheet in the nose before trimming the longerons to length. If the sides are made exactly alike and the fuselage is kept square with a temporiry diagonal brace at the widest point, no difficulty should be experienced in keeping it true. The temporary 1/4 x 1/8 brace is lightly glued in position to hold the lower front fin outline vertical and the diagonal braces added. Reference to the drawing will show that these are of varying lengths at their point of attachment to the fuselage.

The undercarriage box may be made and installed, not forgetting to bind with cotton to provide greater strength. This should be allowed to overhang the diagonal braces by 1/16 which will bring it flush with the stringers when fitted..."

Quote: "Dear Steve, I found the attached plans for E.W. Evans 'Jaguar' in the February 1949 issue of Air Trails Pictorial. The article that went with the plans was credited to Evans, so I assume the plans are his as well. This copy is similar to the one you have posted (ID 584) but includes rib outlines and more construction detail. I hope it might be useful. This is the first time I have tried to scan plans, so my apologies in advance for the size of the files and the poor condition of the original plans ...Many thanks for running the wonderful Outerzone plans site - it's been a source of many hours of building and planning pleasure! Sincerely," 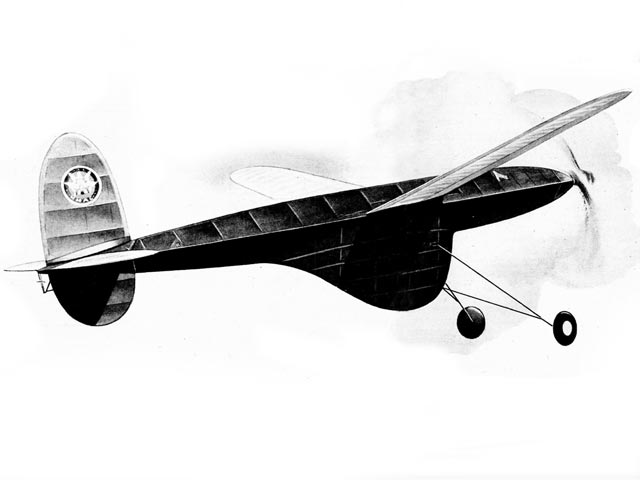