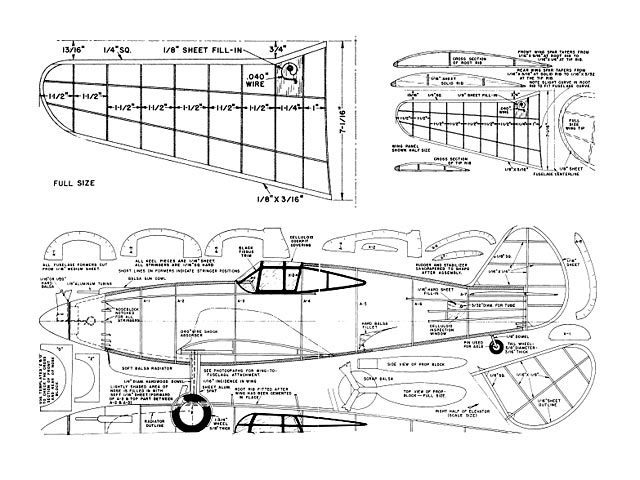 Quote: "Tops in flying scale models is a design by Gough. His rendition of the P-40 fulfills NAA weight rules and flew 45 seconds.

As designs go, the new sleek Curtiss P-40 is tops in streamlining. Its power unit consists of an Allison motor of 1,090 hp. Specifications: Wing span, 37 ft 3 in; length, 31 ft 8 in. Rumor has it that this new pursuit's speed is 400 miles per hour.

Our model retains the streamlines and attractive appearance of the original and a great effort has been made to simplify the construction procedure as much as possible for accuracy and flyability. The original model consistently flew 45 seconds, which is excellent considering the fact that it has been designed according to the NAA weight ruling of three ounces per 100 square inches of wing area.

Construction. The fuselage is built in half shells. One shell is composed of the top and lower main keels, formers, nose piece and stringers. The rudder is built directly on the side-view plan of the fuselage for accuracy. Remove the fuselage half and cement the identical formers, etc to the other side. Fill in the nose between the stringers with 1/16 soft balsa. The complete fuselage is constructed of 1/16 sheet, strips, medium and hard as noted on the plans.

For the nose piece, select two blocks of soft balsa 1/4 x 1-1/2 x 2-5/8 inches and cement them lightly together. Using cardboard templates, cut to required nose shape. Now slit the block at the cement joint and hollow each half out to a thickness of 1/8 in. The radiator is built in the same way.

When the fuselage is completed, sand it smooth and cover the cockpit with thin celluloid. Cement the two 1/16" hard balsa plates in place at Section A-7; 3/32" holes are drilled in them to hold the aluminum rubber tube.

We come to the wing. Pin and cement the leading edge, trailing edge and tips together on the plan. Raise the leading edge up about 3/32 in and glue the bottom ribs in. Using a template, cut sixteen 1/16 in square top ribs. Glue the front tip of each in its place on the leading edge and trim and cement at the rear. Cut two landing-gear ribs and notch spar holes in them. Slide the two center spars in, one wing-half at a time..." 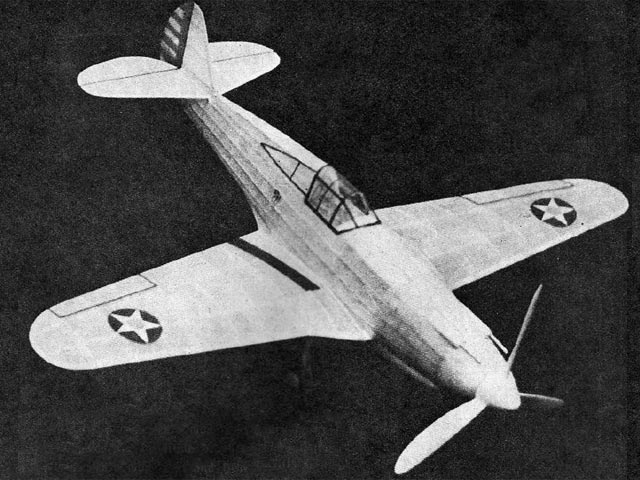