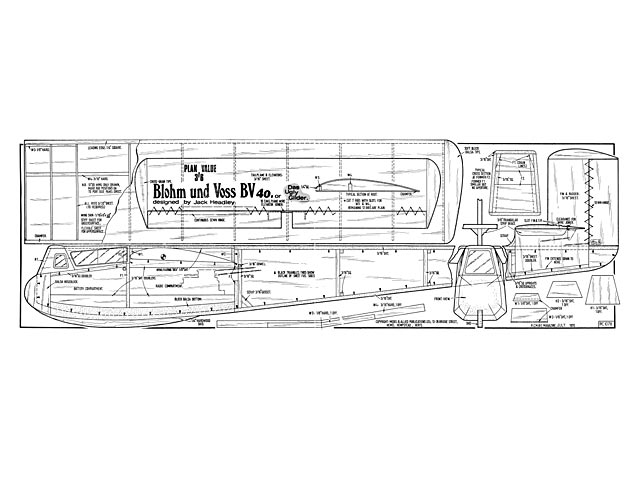 Quote: "The B-17's droned on, deep into Germany now, but still flying an impec-cable formation. In the gun turrets of 'The Saint Jo Belle' wary eyes scanned the skies for attacking fighters. The rear gunner, like the others, saw nothing but enemy fresh air, except for what appeared to be a fly slowly approaching his window. As he leaned forward to get a closer look the fly opened fire.

Maybe this wasn't quite how Dr Vogt imagined it, but this was the basic idea behind his design, the Blohm and Voss BV40. Studies by the German Air Force had shown that it was almost impossible for their existing fighters to approach close enough to a bomber formation to execute an effective attack. What was needed was an invisible fighter, and the FW-190's frontal area of almost 17 square feet wasn't invisible by any means.

Richard Vogt, however, proposed that if sufficient frontal area could be removed, then invisibility could almost be achieved, and that this might be accomplished by eliminating the engine, and using a small glider as a fighter. Certainly unorthodox, the idea was not without appeal, and a design study to investigate the minimum frontal area fighter was made, which resulted in the BV40.

Our drawing on page shows the final configuration, the armament being two 30 mm cannon tucked under the wing roots. A further weapon was proposed - a small bomb which could be suspended from the glider by a cable, but this was not developed.

After the usual teething troubles with the prototype designs, satisfactory flying characteristics were obtained, and flying speeds of about 300 mph were achieved. However, time had run out on the Luftwaffe, and the BV4O programme collapsed (together with the Third Reich) before it could be tested in battle.

The model. We first scaled down the design to make the wing span around 50 in, but it was immediately obvious that certain changes would have to be made. The fuselage as drawn was much too bulky, and the tail surfaces too small. So we moved a line here, and changed a curve there until we had a sensible looking model. We don't therefore claim that this is a true scale model, but rather semi-scale, we tried to preserve the 'feeling' of the original.

Wings. The wings are made in two pieces. First obtain two sheets of 1/16 x 48 x 6 inch wide sheet, one reasonably stiff for the bottom surface, and a more flexible one for the upper surface. Pin down the lower sheet, and mark on the rib locations with a ball point pen. Cut out the required number of wing ribs and glue these in place after first gluing down the leading edge. Now fit the main spar to one wing, and when dry, attack to the other wing. The upper surface sheeting can now be fitted. Attack the wing tips which are made from soft block. Sand the complete wing to the final contours, then reinforce the centre section with gauze bandage securely glued in place. Don't cover the wings yet, as the fuselage fairing has yet to be attached..."

Article pages, text and drawings, thanks to DougStarwalt. These scans are from the newsletter 'Norair Modeller', not from RCME. 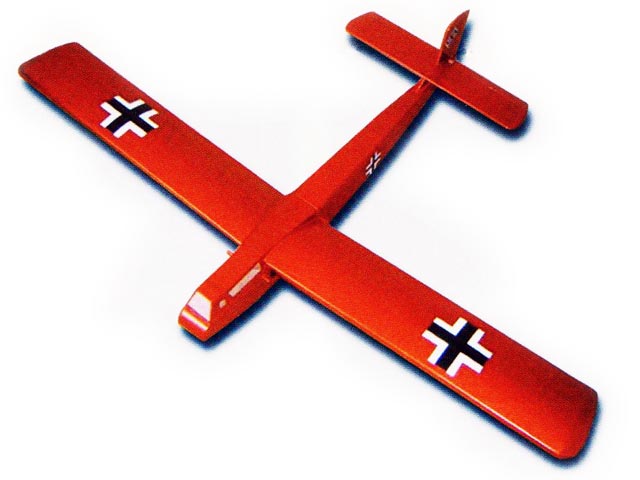 Jack Headley's BV-40 was originally a free plan set in the Northrop (Hawthorne, CA) MAC newsletter 'Norair Modeller'. The plans are dated August 1968 and the newsletter is dated October 1968. The discussion article was titled 'Das Ugly Glider' and an example is seen on the cover of the newsletter. Jack Headley was the editor of that newsletter for several years. Your site plan is the RCM&E version but, another version was also in the German magazine FMT. Several of Jack Headley's designs were first seen in the Northrop newsletter and then in commercial publications, often more than once on both sides of the Atlantic! I have included several attachments regarding the first appearance of the design. My ultimate goal in researching Jack Headley is to place a biography in the History Project of the National Model Aviation Museum, in Muncie, Indiana USA. A gold mine of information is at the NMAM in their archives. The attachments are from those archives and the day I spent researching there. The actual wealth of information on Jack is/was held by his family and other persons of interest for the biography. I have a running blog, posted weekly, on Jack Headley and hope to locate family and friends that can contribute to the research. As best I can tell, Jack passed away in 1983.
DougStarwalt - 28/07/2014
Hallo Steve, another plane my father built when I was a child. It's an diving attack glider conceived to dive in the B-17 bombing formations. regards,
Pit - 30/07/2014
Thank you for putting this up on the web. I love learning about history and it's not so good but might work ideas. I am going to to try to build this as a foam chuck glider and i will let you know if it works out.
robotgoldfish - 04/10/2019
Add a comment