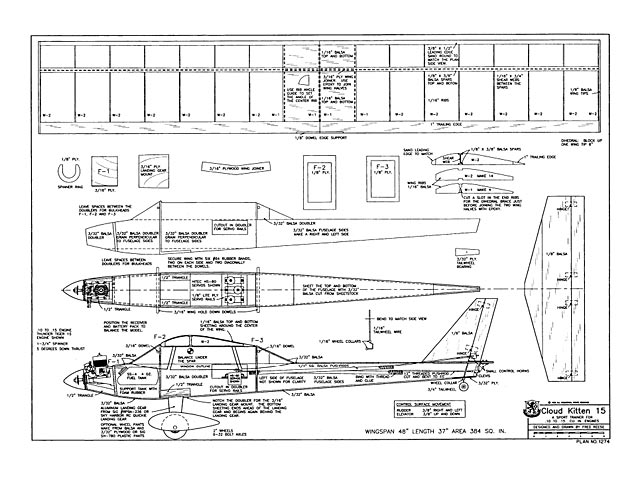 Quote: "Back to basics with a spirited little .15 powered, 3-Channel airplane, designed to be flown anywhere, anytime.

Everyone should have a little airplane like the Cloud Kitten. It just took a long time before I got around to building one. Many years ago, Harry Stewart in Nevada City, CA, designed and built a similar little model called Number Seven (oz8962). It was his seventh design and many people built them. In fact, it became the standard fun fly model of the region back in the early 80's. Actually, at the time, I really didn't need to build one because Harry always had his, and would let us all fly it. We flew it on floats from a pond and we flew it on skis from the snow. We flew it anywhere and anytime. The Cloud Kitten is my version of that airplane, trying to embody all the things that made the Number Seven great.

Usually, I need some motivation to build a new airplane. Our local RC club had scheduled a night fly and a cross country run for this summer. I did not want to fly my other models in these events so I thought again of Harry's Number Seven. I did not have the plans for a Number Seven, but I could have called Harry for a set. Instead, I scaled up my drawing of the 'Cloud Kitten,' a .020 powered free flight that I built last year. Computers are really wonderful for that sort of thing. Funny, but the Cloud Kitten ended up looking a lot like a Number Seven.

The Cloud Kitten is a basic, lightweight, 3-channel model designed specifically for .15 engines. Engines such as the Thunder Tiger, O.S., Magnum, Enya, and Fox are perfect. Do not be tempted to use a Rossi or other racing .15 engine. Also, do not be tempted to use an engine larger than a .15, it is just not needed nor is the model stressed for more power. But don't be misled, a Thunder Tiger .15 turns the Cloud Kitten into a rocket ship, and a .10 will fly the model nicely. Depending on the radio system used, the Cloud Kitten should weigh between 2-1/4 and 2-1/2 lbs.

The best thing about the Cloud Kitten is the flying. While not acrobatic like an Extra, it will still loop and roll, do Cubans and a fair hammerhead. Landings and touch and go's are the best. Sometimes I spend the whole flight doing touch and go's flying in a tight circle. The rudder, when combined with lots of dihedral, gives a very positive roll response without ailerons. I mixed rudder and ailerons on the transmitter so that rudder control can be made from either or both sticks. Mixing helps during take-off and landing, as I am used to steering with my left hand at these times. Either stick gives the full movement of the rudder. Now I just fly as if there were separate controls using both hands and the model does not know the difference..." 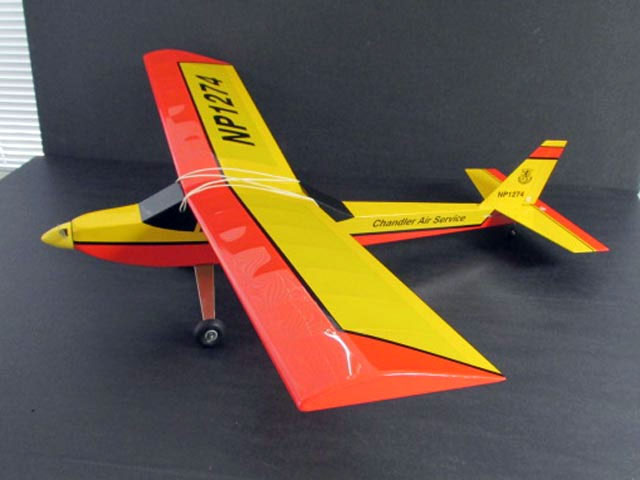 Hey Steve, I just finished the Cloud Kitten [model photos & more pics 003-005] from a great set of RCM plans you posted on Outerzone. (Plan ID: 5732; RCM: 1274). I converted to electric, running a Firepower Speed 450 on an 8x4E prop, 30amp ESC with plenty of room for an 1800mAh (3s) Lipo. She balances right on the CG. Waiting for the weather here in Arizona to cool down so I can put her in the air. Thanks again for maintaining a quality web site and giving us builders something to do.
Paul - 28/08/2015
Here are some pictures of a Cloud Kitten built from an Outerzone download [more pics 006, 007]. An easy build for those wanting to start building from plans. It's powered with an Enya .15 and covered with Ultracote. For more information about the Kitten and its designer go to http://tslidehaven.com/cloudkittenbuild.htm
JohnnyB - 11/10/2018
Add a comment