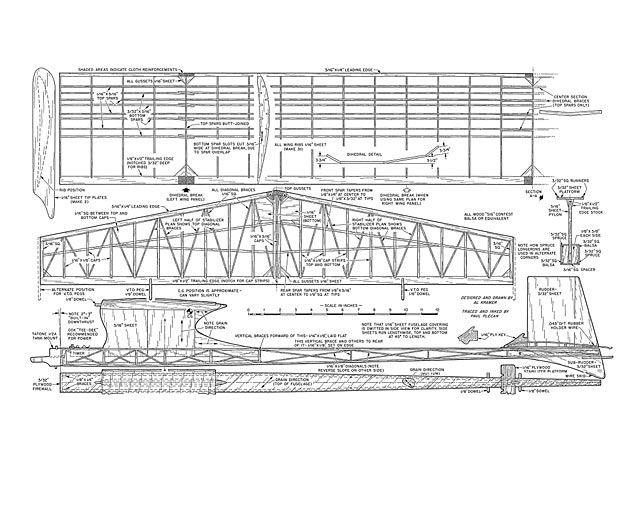 My first Celestian, built in January 1962 was an attempt to get away from contest airplanes that climb like overpowered rocket ships and last only a few weekends. It was also built to take advantage of the new unlimited rules.

Celestian is sort of a powered glider. In its original form, it had an 80 inch wingspan with the same fuselage and stabilizer as the present and final version. With a wingspan so extensive, it had the best glide of any powered contest airplane but lacked speed in its climb.

After a few days of flying, the original was cut down to the present 60 inch wingspan with a total 420 square inches of area. A bit more area was added to the rudder to help straighten out its climb. Within a month, Celestian was entered in two events at a contest at Taft, California and placed 4th in one event, 5th in the other. Two more Celestians were built with the only changes being methods of construction. These were completed, trimmed out, and flown every weekend for two months in preparation for a AAA contest which was to be held at Sepulveda Basin. Three events were entered at the AAA contest; Celestian placed in two of them, taking a first place in class 1/2A and a third place in ROW.

As an experiment, an .09 engine was tried. It proved to be too heavy and consequently the climb was not as fast and the plane did not glide well.

Since then, the plane has been entered at contests at Sepulveda Basin, Bakersfield, Taft, Tulare, Lake Elsinore, and Phoenix. Having entered over 29 events, Celestian has 17 trophies, three ribbons, merchandise awards, high time awards. Also, Celestian set a national record in class 1/2A of 24 minutes, 20 seconds.

Even though Celestian has the best features of today's popular contest planes, it is still completely original. It is very easy to build, having a square wing with an undercambered airfoil. Power is supplied by a Cox TD .049 or .051 swinging a Top Flite 5-1/4 x 4 nylon prop. Cox racing fuel is used in all flights.

Construction of the Celestian is very simple. The plane should turn out very light for its size if careful attention is given to the wood used. Although it is very light and has high aspect ratios, it can safely stand a D-T under power. When finished, the plane should weigh between 8-1/2 and 10 ounces, complete with engine, timer, and 9 coats of dope on all parts.

Begin construction with the fuselage. Cut out two identical sides (note that top edge is straight) and then glue 3/32 square runners to the four inside edges of the fuselage for the entire length. Two of these runners are spruce, placed in opposite corners of the fuselage..." 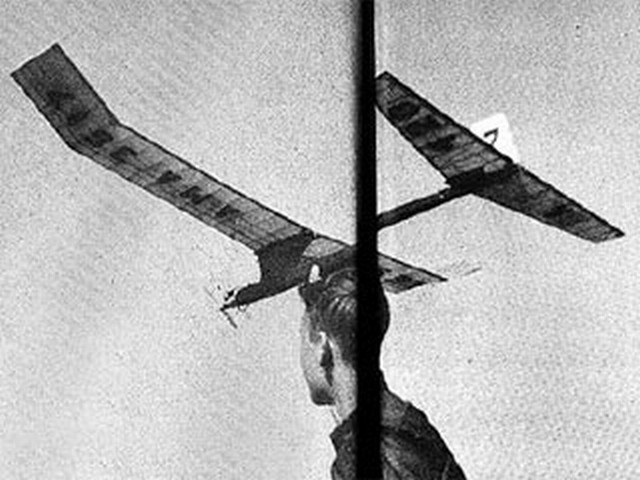