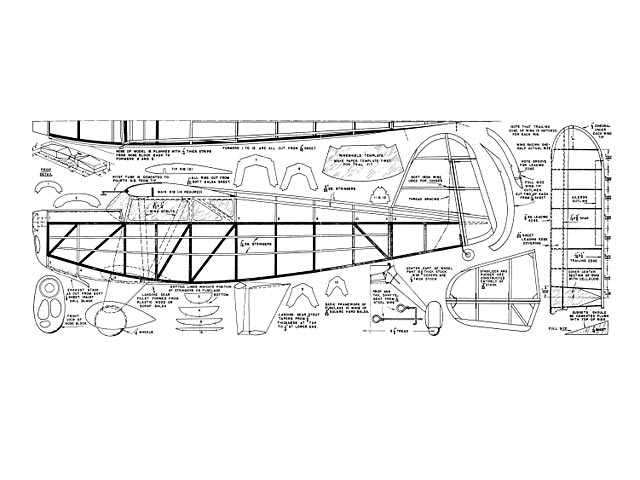 Quote: "During the 1939 Nationals, Akron's pride and joy, Henry Thomas, became National Champ. Netting a first, second, fifth and eighth place in four events, he ran up the highest score of points among the 700-odd entries to Win the Air Trails flying course award. The most important of Hank's placing was the first in the Open Class Flying Scale event. His Rearwin Speedster, built to a scale of 7/8 in = 1 ft, stayed aloft for approximately 50 seconds on the first two official flights. On the third attempt, over one minute was made, thanks to adjustments on the first two tries.

Due to the 'beefy' construction, the Rearwin came up to weight rule without the addition of clay, a notable point to keep in mind, as every ounce of weight is used for strength or flying power. Many model builders like to bring along an old model for the flying scale event, loading it up with clay to bring it up to weight rule. This may be the reason why flying scale contests in the past have showed poor flight averages, since the models carried 'payloads'.

Most of the details of construction are explained in the drawings, but a few of the more important points will bear a little verbal explanation. It will be noted that the basic framework has been shaded in for clarity, and that the two top main longerons are perfectly straight in the side view, as the thrust line runs directly along the top portion of these longerons. This means that after the two sides have been assembled, the fuselage can be built in an inverted position on the workbench to insure absolutely perfect alignment. Note also that there are no cross braces in the upper portion of the fuselage. Temporary braces are used until the bulkheads and stringers have been cemented in place. Later on, they are sliced away, as there would be no room for the rubber motor if they were left in place.

The nose block can be made removable as in a cabin model, but the origi-nal was cemented in place and sanded to fair into the 1/16 soft balsa planking which extends back to Formers 2 and 5. A hardwood plug, as illustrated, should be used if the nose block is cemented in place. By using air wheels and connecting the upper ends of the landing gear struts to the fuselage with wire, shocks due to landing or a dive can be taken care of most efficiently..." 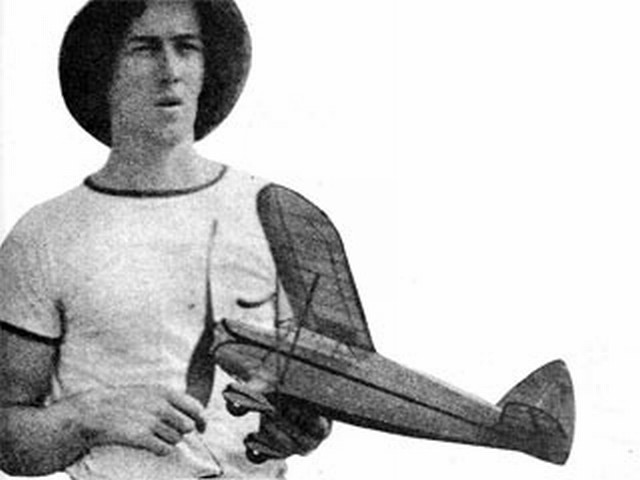