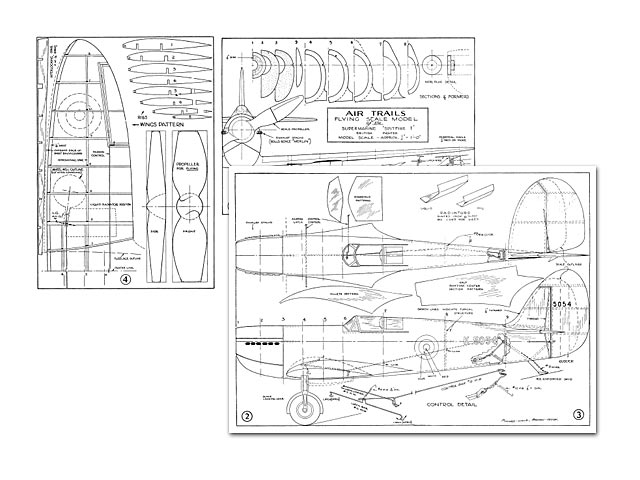 IT is rumored that Britain's Supermarine Spitfire I is the speediest single-seat fighter ill the world, but since all performance records are held secret, no certain comparison can be made. It is known, however, that the plane is very maneuverable at high speeds and has proved itself so well that an appreciable number have been ordered. It is a product of the Supermarine Aviation Works, a division of Vickers, and it is powered with a Rolls-Royce Merlin engine. Photos of the plane appeared in this magazine for September and October, 1936.

Prior to this issue, Air Trails has presented several all-balsa flying-scale models that were miniatures of all-metal or plywood planes. We'd like to sum up the advantages of this type. It is next to impossible to duplicate the appearance of rounded metal parts with tissue covering, and to overcome this difficulty, suitable model structures were covered with a special 1/64 in sheet balsa now available.

The finished all-balsa models were lighter (even with automatic controls), better balanced, and were more easily repaired than the ordinary multi-stringer tissue-covered types. Considering the many stringers around the moment arm, the number of coats of dope to finish the tissue, and the heavy tail-surface members that have to be balanced with weight in the nose of the scale-appearing tissue-covered models, it is no wonder that they are slightly heavier.

The Spitfire model presented this month is one of our typical all-balsa jobs, including optional controls. Read the instructions and study the drawings carefully for the all-balsa construction procedure, and start by making a 4 x 6 inch plywood sheet of two layers of 1/32 balsa for the formers to be cut from.

Fuselage. Carve the cowl block, using the top and side views and then the section templates. If you favor building the first half of the fuselage frame on the side-view drawing, split and hollow the cowl block, and then proceed in the usual manner. If you prefer the method by which the two side longerons arc cemented to the cowl block and the formers then arranged on them, do not split the cowl block; just hollow it according to the drawings. Be sure the fuselage lines up if the latter method is used. Make the rear-hook device, sew and cement it to former #9, Attach wing panels before continuing.

Wing and Tail. Wing-panel and tail-surface frames are covered with single layers of balsa sheet, instead of the usual plywood, because of abundant frame members. The sheet cover can be replaced by tissue, by the addition of trailing edges; but the balance and appearance will be lost. Cut four 1/64 in sheet wing-panel patterns according to the broken oversize line. The grain should run from ribs 1 to the tips..." 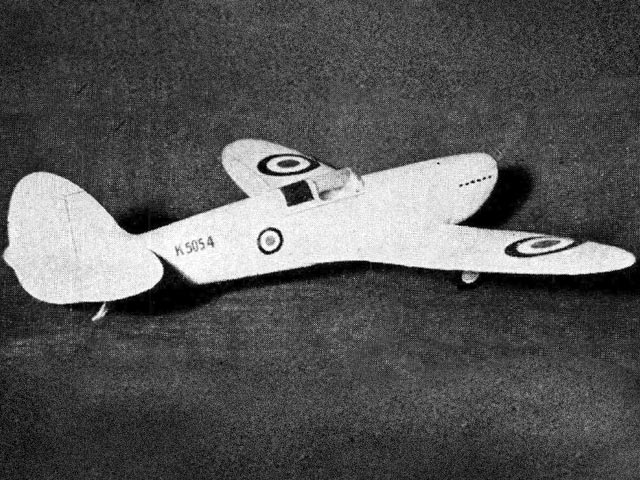