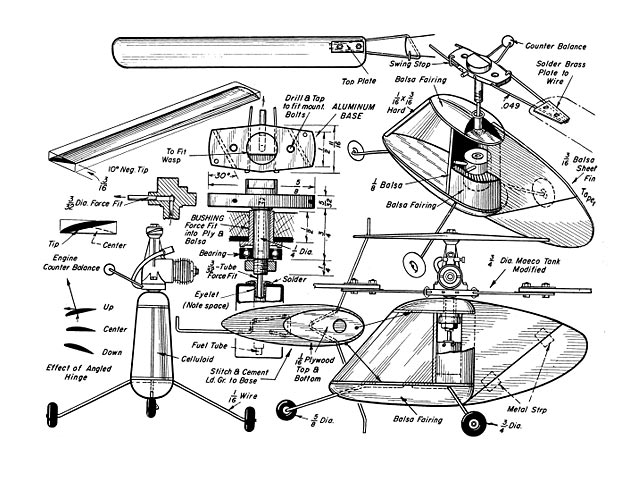 Free flight 1/2A size helicopter design. This plan appeared in combination along with the Everitt Wakefield on thefullsize Magazine plan service drawing.

When a super Half-A engine is screaming its head off at 17,000 rpm it may be developing near one-tenth hp. Assuming 100 per cent theoretical efficiency, this power is able to pick up an 8 oz weight and lift it 110 feet in one second, or 6,600 feet in one minute.

Having so much power in such a small and light package, one wonders why we do not have model helicopters buzzing everywhere since neighborhood horizontal flying space is scarce. Well, if power was all that was needed for success in helicopter flying, we would have seen full-scale helicopters much sooner, and the ones that we see now would have much more spectacular performance.

The number of entries in AT's helicopter design event was surprisingly high. Designs varied from practical to imaginative. That submitted by Paul H Stahlhuth of Speedway, Ind, appeared to have the best flight possibilities. He has had past experience with such models as can be seen from details incorporated in the design.

In examining the plan, you will note how many problems were met in a clever way. To handle torque, Mr Stahlhuth fixed pivoted vanes directly to motor and permits the unit to rotate. He has a contra-rotating system with a minimum of fuss. To provide steady fuel supply without changing balance, he used a fixed tank and transfers fuel through a hollow bearing shaft. His bearing layout is on the substantial side and designed to eliminate as much friction as possible. This all worked splendidly on test model.

The major item on this design is motor base to which practically all parts are fixed or mounted. You may have trouble duplicating it if you do not have a lathe. However, in such case it would pay to have it made outside as it can be used and re-used for years.

The model AT tested is identical to that shown with the exception that we used flat vanes instead of having pitch vary 10 deg. as recommended. The model was first tested indoor. It. was held stationary just to determine how well the rotor system worked. The upward pull proved more than strong enough to lift model. Holding fuselage portion while contra-rotating rotors were turning produced no particular torque reaction. The bearing and fuel supply functioned fine. During outdoor testing, model would take off from ground by itself and start upward with a strong and fast vertical ascent. It was fun just watching it do its realistic and unassisted take-offs—and were they fast!

The only change suggested is enlargement of vanes. The model should be slowed up, and larger vanes should do the trick. Double the area shown on plans. The .049 wire which is used as hinge for vanes was found to be some what weak...."

Article pages, text and pics, thanks to rchopper56. 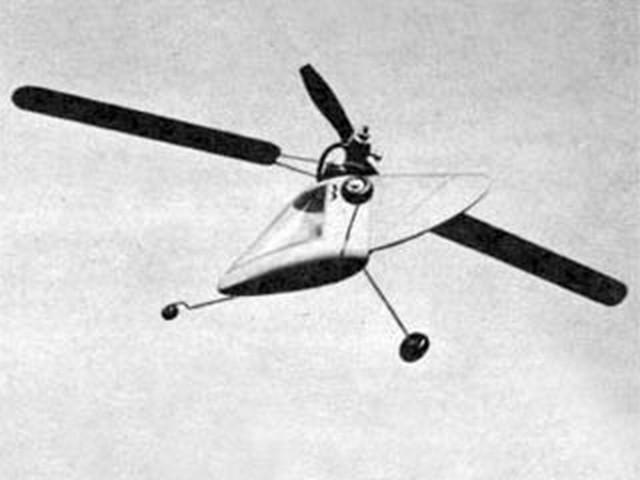