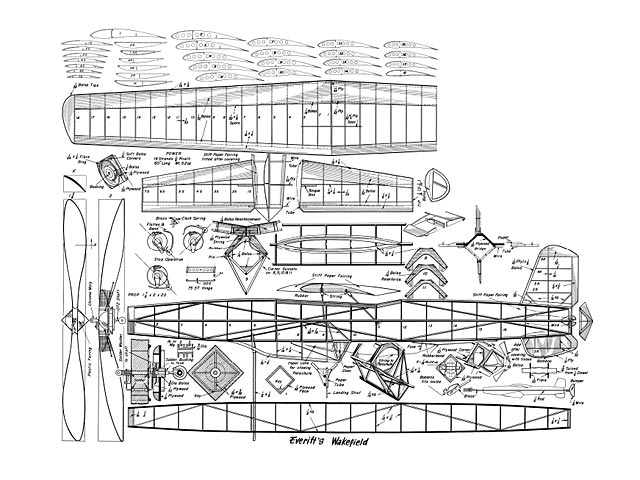 Quote: "Red's Remarkable Wakefield. The Western Viewpoint. Most talked-of design in Wakefield circles is this Californian's unique craft; it should set the pace for 1952. Designed by Arthur G Everitt, described by Dick Everett.

In response to requests from a great number of interested modelers, we will try to tell all about 'Red' Everitt's remarkable model.

The design work alone on this ship took over two months. He tried every kind of rubber, deciding finally that Pirelli was best suited to his set-up since the torque of this particular type of rubber was high after forty or fifty seconds of prop run. This entailed numerous flights on his modified Zombie (oz7812). Keeping weight in mind, Red decided to use a full-length rubber motor. He was warned of the stability problem present on such a set-up, but this didn't stop him.

Force arrangements were carried over from his modified Zombie. A definite ratio was determined for nose moment, tail moment, incidence, and so on down the line.

When he decided to use a small tail, the experienced modelers again shook their heads. When he chose a plug-in tail, nothing but trouble was predicted.

The wing selected was of straight taper, using the Joukowski airfoil which Ron Warring recommended. Each rib was plotted so that a true section could be obtained for the full span.

The prop was the result of extensive research. Red used a front side planform which conformed to a circle of predetermined radius. The pitch for each one inch of prop dia was calculated, then interpolated into a pleasing outline. The prop block was cut to shape before carving; when the carving is finished you have the exact outline. The section used was taken from an overseas publication. The result is a prop of 20 inch dia and 30 inch pitch.

Early last year broken motors through maximum wind efforts led Red to develop his outside winding method to such a high degree that he can wind his model fully, with no help - in fact he has gone out to the field by himself and made numerous fully wound flights.

The removable prop and unorthodox stop are really simple, complicated as they may look, and they work to perfection. The idea of using all the winds in the motor proved good, the removable bobbin allowing Red to pack in maximum winds more easily. He was worried about getting the prop to stop in exactly the same place, flight after flight - this is very important since the glide is more often messed up by a poor fold than any other reason..."

Quote: "Hi steve - this is Everitts wake from my magazine plan service full size plan [originally printed along with a 1/2A helicopter (oz5723) plan... from jeff mccammant, story city iowa" 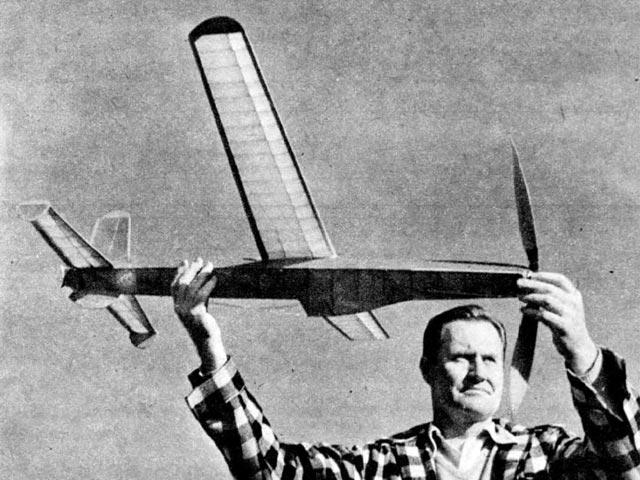