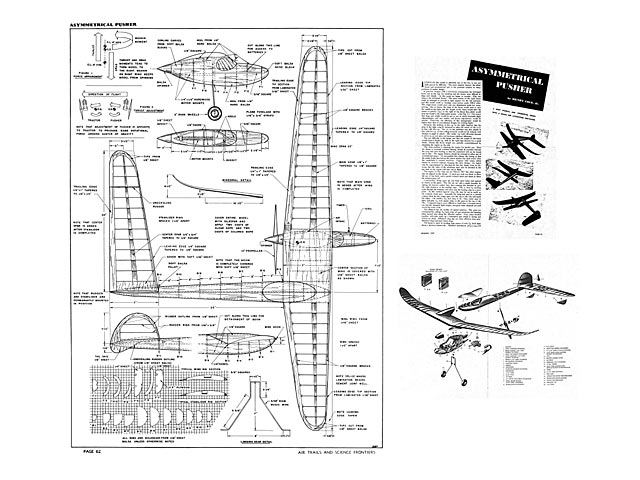 Quote: "Although this model is definitely out of the rut. it was not built just to be different. The most singular feature, the offset boom and asymmetrical tail, is the practical solution to many problems of pusher design.

In previous designs with a twin-boom arrangement the left-hand boom was in the way for cranking and the booms were difficult to align and detach. At this point we began to wonder: Why not remove the left-hand boom? The cross section of the right boom could be enlarged to provide a rigid support for the tail surfaces and this would count as fuselage cross section under AMA rules. The single boom would need only one detachment point for transporting. But in theory the drag of the boom would tend to turn the model to the right, and the weight of the boom would shift the center of gravity (CG) to the right of the thrust line, which would turn the model to the right under power. (See Fig.1) This meant that drag and weight would be put to use to obtain desirable flight characteristics, and less rudder and thrust adjustments would be needed. Therefore, the efficiency of this arrangement would be higher than that of conventional designs for circling flight!

However, the shifting of the CG to the right required that the area of thc right wing be increased to place the center of lift. (CL) in line with the CG. The CL of the stabilizer was also placed in line with the CG so that rolling moments would not be induced with changes in angle of attack. The rudder was built off-center because it serves as an end plate and increases stabilizer efficiency.

The one difficulty in the design was that the weight of the boom would cause a larger CG shift to the right than desired for a spiral climb. Hence, the boom weight was partially counterbatanced by mounting the engine on the side.

The main problem is adapting the engine for pusher use. Since the thrust is reversed, a dthrust bearing should be installed between the prop and main bearing so that the crankshaft will not be forced out of line. The engine rotation should be reversed to allow use of conventintial props. To accomplish this, change the timing so that the points break just before the piston reaches top dead center when the crankshaft is rotated clockwise. Engines with rotary valves cannot be reversed without changing the valve timing. An engine may be supercharged by directing air into the intake from an air-scoop but the force of the airstream must also be directed to the gas tank or the engine will lean out its flight.

The engine on this ship was an Ohlsson 23, but other engines ntmay be adapted to the design. A metal gas tank was fitted to allow the use of hot fuels: and a special exhaust stack was made to direct the exhaust gases aft.

Construction: Wing spars are cut from sheet balsa and tapered as shown on the plans. The ribs are cut with a single template by cutting the bottom camber first, then rotating the template to give the right thickness at the trailing edge. This is done by pushing a pin through the template and sheet near the leading edge as a pivot point. By this method tapered wing ribs may be cut as easily as the constant chord type.

Assemble the wing and said to a smooth contour, then lay the center spar over the top of the ribs and mark the edges. Cut notches 3/16 deep to fit. Glue center spar in place..." 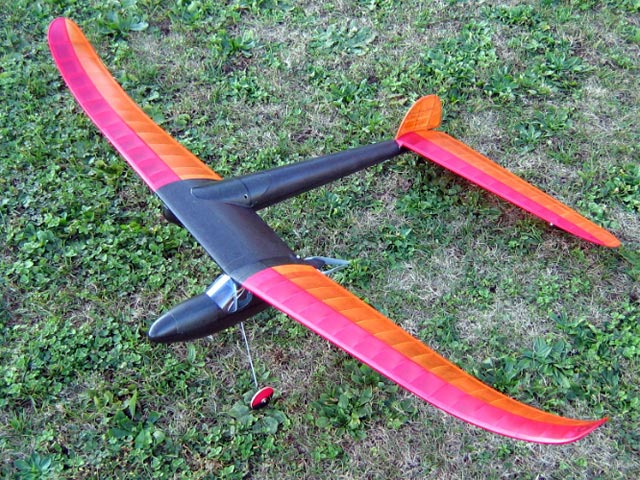