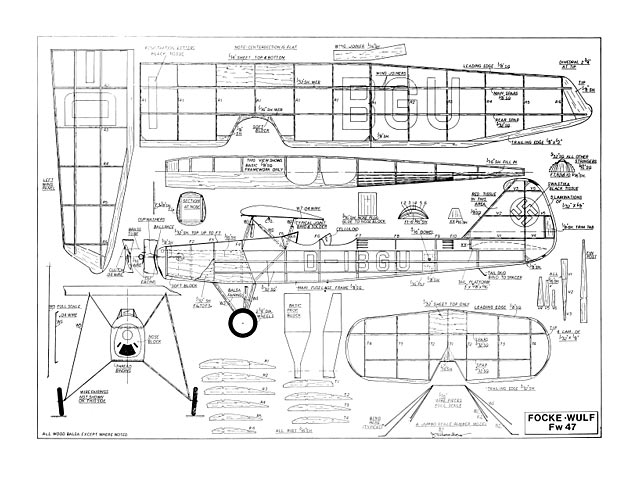 Quote: "FOCKE WULF FW-47D by Jack Headley. Rubber powered Jumbo Scale of a famous German observation plane. Designed for contest work, it's a winner either way - contest or fun flying, and should be a reall building challenge.

There was a time I must confess when l wouldn't have been caught dead with a Scale Rubber model. Scale was the lowest of the low, and the only true rubber model was a frail boxy structure consisting mainly of lightly doped tissue, enclosing a monstrous rubber motor, dark and shiny. A flight of one of these models was a joy to behold. First came the winding, which needed muscles akin to the village blacksmith to put on that penultimate turn. Then the launch and anything could happen. The propellor would flail around at a tremendous RPM as it tried vainly to absorb the collossal torque, and the model would jump skyward, shaking mightily. Then the whole contraption either vibrated its way into a thermal never to be seen again, or some part would fail, and the model would plunge to earth in an equally dramatic manner. Well, one way or another it generated a lot of excitement.

But times change, and contests for this type of model semed to disappear, probably forever, along with our limitless flying fields and smog-free skies. Still, the true contest flyer never gives up, and if be can't find a contest for one model, there's always a contest for another type, and this is how I began my Scale modeling career.

Our local Scale club, the well known Flightmasters, runs numerous Scale contests during the year, and in 1969 added one more, for large rubber models. The main ruless were wing span greater than 48 in, no folding propellors, and the models were lo be based on aircraft built prior to 1943. I decided to enter, and when looking about for that ideal aircraft (square fuselage, high wing, long nose, tall undercarriage) I came across the FW-47.

It had almost all or the features mentioned above so I quickly made a working drawing and built up my first model. This was completed, in my usual way the day before the contest and the first test flights showed that I'd not put in enough wing dihedral. So back to the building hoard, where the wings were taken apart, then put back together correctly.

Came the dawn, and the contest, calm and clear, a perfect day, and the model responded by behaving perfectly and taking second place in First Annual Jumbo Seale Event.

For the next year's contest, I built another version of the with much more scale detail. This also flew in a very satisfactory rummer, but not quite as well as the first model, due to increased weight and drag of the additional scale features. (It disgraced itself in the contest by breaking its propeller before the contest first flight.)

The plans show the more detailed version, but my own preference is for the simpler model, as l'm still more for flying than Scale. However, the building notes that follow discuss the construction or both versions, so take your pick, whichever way your interests lie..."

Quote: "Steve I have built several of these things and, if built lightly, they are floaters, capable of going out of site as mine did... the author Jack Headley has this plan published in the June 1973 Model Airplane News... I have the article which I will scan and send when I get the time but don't let that hold you up. The biggest problem builders have with this thing seems to be the very spirit of FAC which seems to be the over doing of scale effects. If you want a spectacular flier something like a powered sailplane leave all the drag off and build it as light as God will allow. For good luck leave the swastikas off. The message I wish to convey here is plainly leave the garbage off the airframe and the result will be a plane that simply doesn't want to land... period. Don't build a lead feather! ...a few pics of mine in flight." 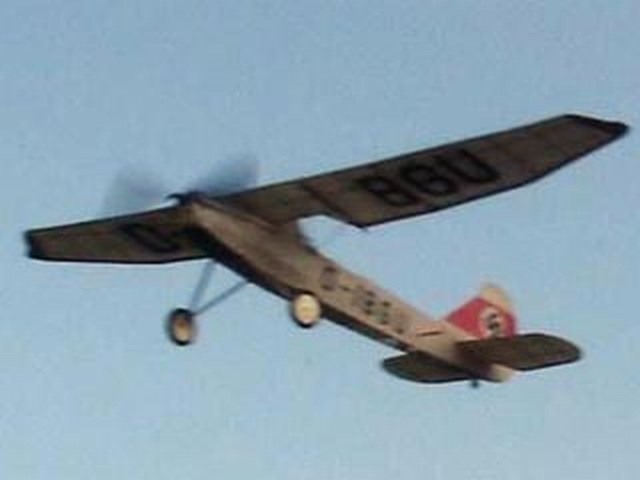 Steve this is known to Focke-Wulf as the A47 Hohengeier (vulture) There were only 36 built, and was distributed to German weather stations as a weather plane. It was a hard plane to land, possibly on account of the huge wing. There were cartoons drawn depicting the pilot tossing an anchor out of the cockpit. I find the model will float forever 8-12 inches off the ground on its landing approach.
RobWells - 16/07/2014
Steve... I forgot to mention I had reduced the plan to 36 inches to build mine. I used Bill Noonans prop setup (cool simple freewheeler) from his Missle Thrush. My first disappeared over New Jersey. I covered it with White Esaki and lightly misted it with silver Krylon, then did a Krylon Matte finish to seal. Every attempt was made to keep it light. Mine weighed around 30 grams.
RobWells - 16/07/2014
Add a comment