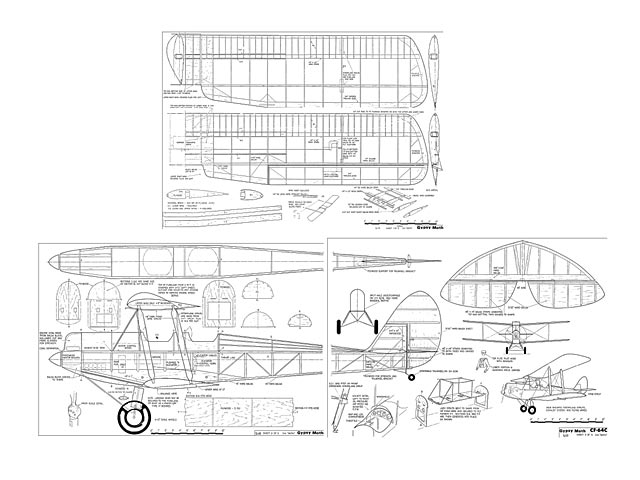 Quote: "Of all the biplanes ever built, perhaps one of the most famous of them all was the Gypsy Moth, for it was in such a plane as this that Amy Johnson, with only 80 hours of flying to her credit, on the 5th of May 1930, took off from a small airfield in England, and became the first woman to fly solo, from England to Australia.

The first Moth took to the air in 1925. Over a period of years over 3,000 of these planes were built, and many are still flying today. Performance figures varied according to power plants used, and modifications. Two different wheeled undercarriages were used. Moths were also flown as single seaters. There were racing versions, training and sport planes. Some had head rests, some with wing slots, and also with sliding canopies over the cock-pits. Several models had radial engines as on the Ganet Moth; some had the motors exposed, and others cowled in.

A plane such as this offers to the R/C scale builder the ideal model, as he has a wide variety of finishes to choose from. In addition to being simple to construct, the model is an excellent flier.

Careful study of the plans will show that the 'Moth' is a simple plane to build, it is very rugged, and light for its size. We feel that most modelers building a scale plane have some building experience, so rather than go into building details, the more interesting highlights will be outlined.

It is very important that all wing surfaces be true. A wing panel is no truer than the surface it is built on. Make sure that all your work bench is free from warps, and that the surface you build on is level. The only deviation from scale on our model was the wing airfoil section. In order to have a fully acrobatic ship, a modified 2415 section was decided on. Also the wings were built in one section rather than folding, as some were built with non-folding wings.

To those who may want to build and fly this plane by rudder only, a Clark Y section is recommended, and the ship will fly very well on rudder only, providing that not too much rudder movement is used, as the surfaces are larger than on most other planes.

The lower wing is set up at 0 degrees and the upper wing has 3 degrees positive incidence. The stab is set at 1-1/2, but should not be more than 2 degrees. This was found to have very good flight characteristics in both upright, and inverted positions. While the motor mounts are shown to be at 0 degrees, 1 degree down and 2 degrees right thrust was used on our plane. The interplane wing struts are made of very soft balsa, and are plugged into the wing. The flying wires are of a round elastic, and this is held in by the struts. This makes it very easy to assemble, and in the event of a rough landing, the struts can pop out or break without any damage to the wing fabric.

Make, sure that the CG and balance point are exactly as shown on the plans, if not change the position of the R/C equipment until it does. Be careful that the CG is not ahead of the location as on the plans, as a very unstable condition will result, causing the model to go into a series of stalls, thus making it very hard to control.

Begin your construction by building the fuselage first. Lay out sheet 1 and sheet 2 on your workbench, and start by cutting out plywood section Y-Y, from a hard piece of five-ply. Next make the jury struts from 1/8 in piano wire, and fasten to section Y-Y with metal clamps (Top Flite landing gear fasteners are ideal for this). Be sure to keep all jury struts true, arranging the upper section to fit the airfoil, and set up at 3 degrees positive incidence. The struts may either be spot welded, or bound with wire and soldered, and the top section wrapped with electrical tape where it comes into contact with the wing surface..." 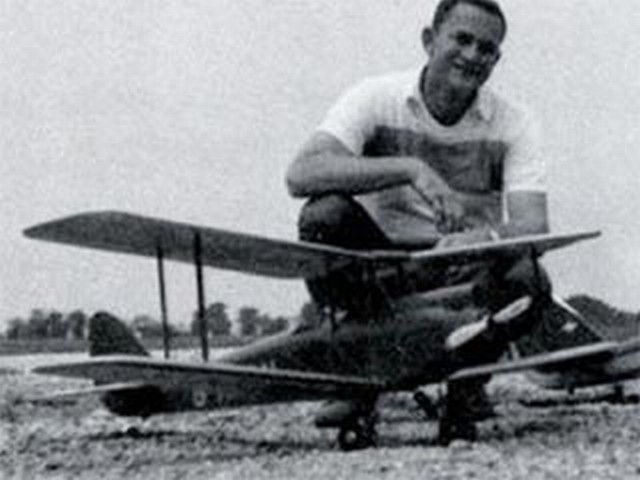