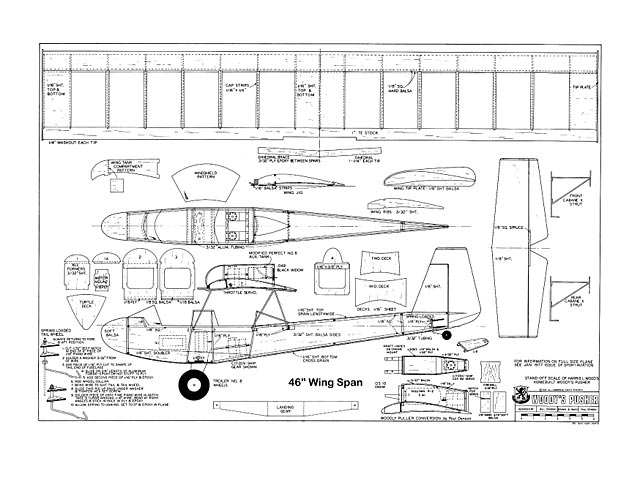 Quote: "Woody's pusher. A semi-scale model of the popular home-built aircraft, the woody is designed for .049 to .10 engines and three channels. Optional tractor engine configuration is shown. An excellent sport ship.

After visiting several EAA fly-ins in Rockford, Illinois, with his father, a young teenager suggested to Dad, an aircraft design engineer, that he design and build a home-built airplane such as the Pietenpol. This was the impetus necessary to get Harris L. Woods busy. His efforts culminated in one of the better known home-builts, the Woody Pusher, sometimes known as Woody's Pusher. The plane was finished some seven months later in time to have its first showing at a fly-in in Dayton, Ohio in May of 1965. It was here that many interested people talked him into selling plans.

Young Robert Woods logged many hours in the plane and the Woody was instrumental in earning him his pilot's license a few weeks before he graduated from high school. The Woody Pusher was flown to the EAA fly-ins at Rockford in 1965-66-67 and 1968; the last two times by Robert. These were his first long cross country solo flights. At the 1965 fly-in it received a great deal of attention and the trophy for being the most unique design.

The original Woody is now located at Holly Springs, North Carolina and has been flown many hours since it was moved there in 1971. There are many other Woody Pushers being flown all over the United States and Canada, all built from plans designed by Harris L. Woods.

I was sorry to find out, while making plans for this article, that Mr Woods was killed in an aircraft accident on September 5, 1975. Prior to his untimely death Harris Woods designed seventeen aircraft, among which were seven Gyros, one Flex Wing, two Hovercraft and seven Fixed Wing airplanes. For readers of the EAA Journal Sport Aviation names like Woody Pusher, Quail, Rail, and Scamp, are all familiar. Woody's wife, and Bob's mother, Mrs Eva Woods, wanted to thank us for our continued interest in aviation and hoped it would be there for a long time because: "Woody lived aviation and contributed so much to it and enjoyed every minute." A fitting tribute to Mr. Harris L. Woods, aircraft designer.

THE MODEL: This is a brother act, one brother, Bill, in Indiana the other a resident of sunny Southern California. Bill, the designer, indicated this Woody was not built to exact scale, it was not even built to Stand-Off Scale, kinda like stand-way-off similarity. It was built for fun and fun it has been.

The one you see here is my Woody I. I had the privilege of building my plane from his plans and my payment was to write the article, draw the plans for publication, then take the pictures. Woody I was the victim of a dead cell in the flight pack, straight in from 20 to 30 ft. Straight in, to the adobe surface of our flying field, is like concrete anywhere else. Disintegrated is the best word I can think of. Rebuilt it will be, since I cannot remember a plane I have enjoyed as much or which has provided as much fun.

My Woody II is in the construction stage and should be finished long before this gets into print. Even if you do not intend building a Woody Pusher, read on or wade through the following, there are all kinds of interesting tidbits for you RC buffs, no matter whether you fly .049's or .60's.

Separate the two sides and lay them out on your workbench, top edge to top edge. You must make a right and left side. Glue on the doublers. When dry, add to one side, in the proper location, bulkheads 2, 3, and 4. Using a small right triangle, make sure they are square to the side and allow to dry thoroughly. Put glue on the top edges of the formers and put the other side in place. Use masking tape to hold it together. Bring the two tail ends together and clamp with a clothespin..." 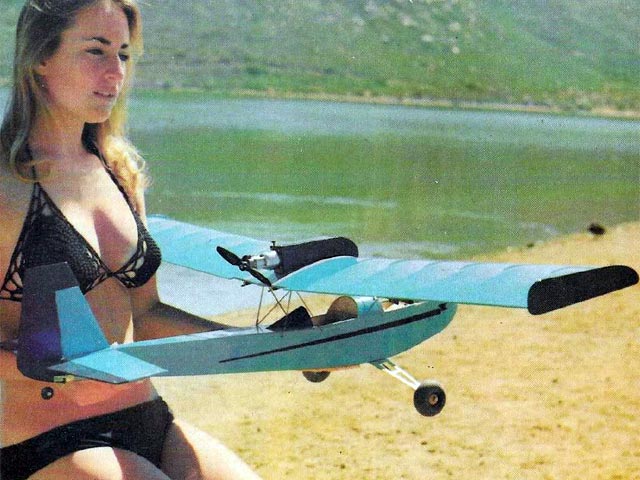