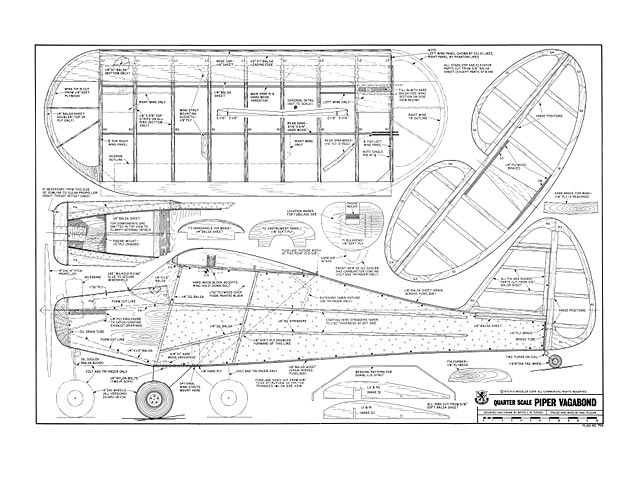 Quote: "Piper Vagabond - Colt - Tri-Pacer. Join the Quarter Scale group with this Piper. Designed for a .60 size engine, its very realistic in the air and easy By Bryce C Petersen.

The one thing you can always count on when you join the model aviation world is the total lack of boredom. You have just completed your 100fth flight with your faithful old bird and your mind starts to think about fishing, boating, and air conditioning, etc. The station wagon that entered the field awhile ago has attracted a crowd so you drift over for a look. A giant model is being assembled, and it is so big that the landing gear must be removed for transport. The model is upright now, and I heard someone say that it is 1/4 scale.

The beaming modeler has just finished pumping fuel in the tank and has moved around to start things up. All I could think about was all that MonoKote!" What's this? He is using four fingers to flip the prop. Most unusual! Suddenly the big engine comes to life, but it is just ticking over, When he starts to taxi I noticed something odd. The wings are not bouncing up and down. A closer look and I see the wheels absorbing the shock just like the real ones do. A nice wide circle at the end of the runway and I say right out loud - Boy, that's super.

When he starts his roll-out, something else was different. He is using only 1/3 throttle, and look at that - the tail is already up. When the big model passed
by me, it had already transferred from ground to air. While watching the gentle climb-out, I knew that modeling holds a new adventure for me, Having not really absorbed what I had just seen, the big model came in gently over the runway and set its big wheels down ever so softly with its tail still in the air. I think it was watching that big tail sink slowly down that was the clincher for me. The next day I started the drawings for the 1/4 Scale Vagabond.

In all my experience with model airplanes, I haven't seen a design that performs with the grace and smoothness the Vagabond possesses; that includes the kit trainers that show up at the field.

Piper Aircraft must have felt the same way, because from the Vagabond design came the famous Colt and Tri-Pacer. All they really did is make it a little bigger and change to a tricycle landing gear.

I personally love to fly tail draggers and spend most of the time trying for the perfect three-point landing. If you are a nose wheel man, I have tried to add enough detail to the plan to build the Colt or the Tri-Pacer. If you build the Vagabond, the color scheme was always solid yellow with no trim, The Colt and Tri-Pacer was always two-toned - white and what have you with lots of trim.

Back to the model. I would like to explain several theories I have about the construction of this model. First, the engine mount and location. The engine is mounted in solid wood with big sheet metal screws. The wood mount is epoxied lengthwise to the plywood doublers that make up the fuselage itself. This all becomes solid as a rock. The other way is to use a metal or plastic motor mount that is mounted to a 90 degree firewall with 8 bolts. The firewall can become a vibrator and there goes your 8 bolts. The firewall engine mount technique also requires a removable cowling that is usually made from plastic. Enough said. The upright engine hanging out in the breeze is considered an eyesore when it could have been fully cowled. Well, there's more to it than that.

Consider a situation I have witnessed. I have entered a Stand-Off Scale contest and am waiting on the flight line, next to fly. The contestant in front of me has a beautiful Spitfire and has scored high on static points, His engine is fully cowled and inverted. The CD gives him the go signal and his model sits upside down on a cradle. He gives the starter a quick bump and the engine starts. A quick flip of the aircraft and he starts his taxi.

When he advances the throttle, the engine sags and quits. A mad rush with a starter out on the field for a quick start in the upright position. After finally finding the hole for the glo-plug, a mad bump with the starter sends the front half of the spinner down the runway. The CD calmly announces that his time is up. While walking his aircraft back to the pits, he tells me that the competition is over for him because his overheated engine quit on his first round.

In contrast to his effort, my engine usually starts on the first or second flip because I pulled the fuel line on the last flight and let the engine run dry. The exact prime was added for easy starting. Once in the air the smoothness of the aircraft and engine scores big, and everyone forgets that shiny power plant sticking out up front.

Big scale contests are another matter. What I am talking about is the average fun-fly in your local area and not the Nationals.

Next from my soapbox is the basic rule of success, and that is to 'keep things simple.' The Vagabond uses solid foam fuselage halves front to back. The cowling is made up of two pieces of plywood. The side stringers from scrap balsa.

I wanted to use foam wings for simplicity, but I like to look up through the MonoKote at the wing ribs while flying.

The Vagabond is only a three-channel airplane. You simply do riot need more control. if a gust of wind dips a wing tip on final, you touch a little rudder and it responds exactly like ailerons. A trick for spot landings is to reduce throttle until your model starts to sink over the end of the runway. A touch of throttle will check the sink rate at about 18 in of altitude. As you approach the spot, you kill the engine and she drops in the spot on all three points. You can score big in the limbo event the same way by gauging altitude with throttle.

What all this adds up to is the Vagabond is one super stable airplane. Its low aspect ratio wing and short coupled fuselage make it perfect for scale modeling. It gives you excellent control in slow flight and high performance at top speed.

This is a big model. My wife says it is too big. It uses most of the floor in the Recreation Room. Everyone seems to be building big models. I understand there is a club in Pennsylvania that will not accept a member who builds models under six feet.

Actually, this model is not quite 1/4 Scale, Another inch and it will not fit in my car. Three more inches and it is 1/4 Scale but the transport problem reigned supreme. So let's get to the construction..." 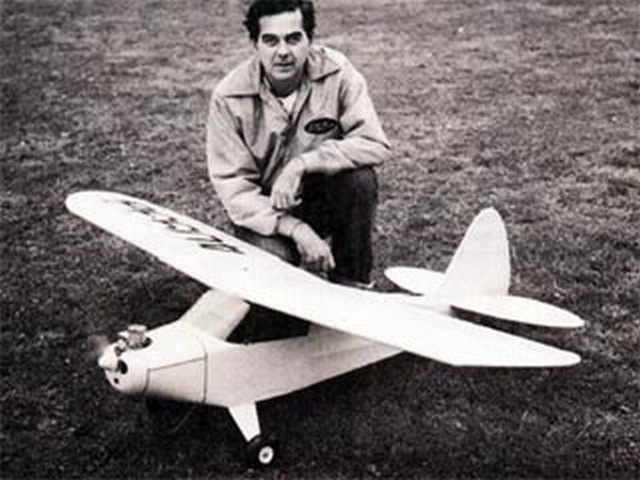