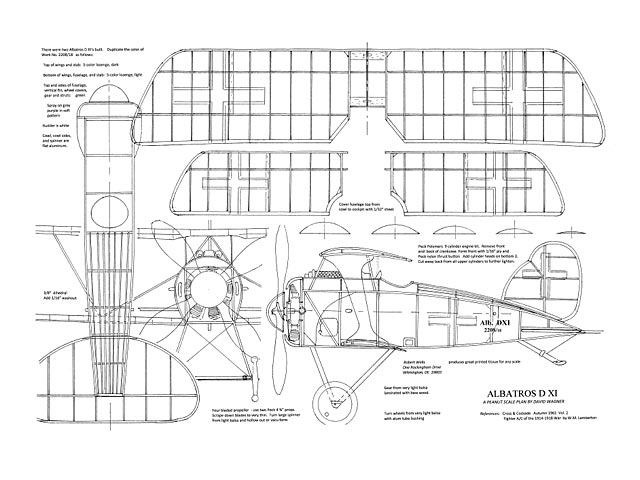 Quote: "A WWI scale peanut job that will impress your flying buddies and the judges! Albatros D XI, by David Wagner.

The Albatros D XI was a significant departure in design for a company that had produced some of the most elegant biplanes of the First World War. Their earlier fighters and reconnaissance aircraft all featured wonderfully streamlined fuselages enclosing liquid cooled engines. The D XI was meant to take advantage of a late war German interest in the more powerful rotary engines that had become available, and which powered the Fokker D VIII and the Siemens Schuckert D III. Albatros produced two models of the D XI for the third fighter competition in June 1918, but failed to obtain a production order.

The D XI is a fascinating combination of design moments. A stubby, squared-off fuselage featuring the classic, graceful Albatros wings. I think it makes an interesting scale model. As usual for me, I chose to utilize a scale undercambered airfoil and rib spacing.

The model plan is straightforward and not difficult for any experienced modeler. I would highly recommend Robert Wells printed lozenge tissue. The Peck Polymers plastic engine, a four-bladed propeller and spinner are more trouble to build, but really make the difference in appearance, and you will need your weight there. The plan is strictly scale in all proportions. I have to say, I was pleasantly surprised to find that my model flew very well.

The structure is not unusual in any way, so I won't go over the building sequence, except for a couple of points. These will largely reflect the way I build and approach the finishing. This is a peanut scale biplane, so you will have to keep it light to fly well. I use laminated balsa strips for all the flying surface outlines. Select the fuselage longerons with care. I prefer them to be quite stiff so there is no bending from the tissue shrinkage. That's right, I cover peanuts with Japanese tissue and shrink it tight with water, the old fashioned way.

A word about the wings. If you've never built one with an undercambered airfoil, don't be afraid to try it. Freeflight models have utilized undercambered airfoils with great success for many years, and there is a reason for that. They fly better at the slow speeds of our models, and this is particularly true for a high drag biplane. I used sliced ribs for this model, as I do for almost all my models without tapered wings. I find sliced ribs to be faster and lighter than cutting and notching solid ribs.

You can use light balsa for the wings. Expect them to be a little flimsy while you're sanding, but have patience. The tissue will greatly stiffen them after shrinking. And more than usual. When you cover under-cambered wings, you have to glue the bot-tom tissue to each rib. I use thinned Sig Bond and a small brush for this..."

Quote: "Steve, Another free flight plan for you. This is one of my plans that was published in Flying Models in February 2014. I can send you the accompanying article if you would like. Great site, and visit it every day." 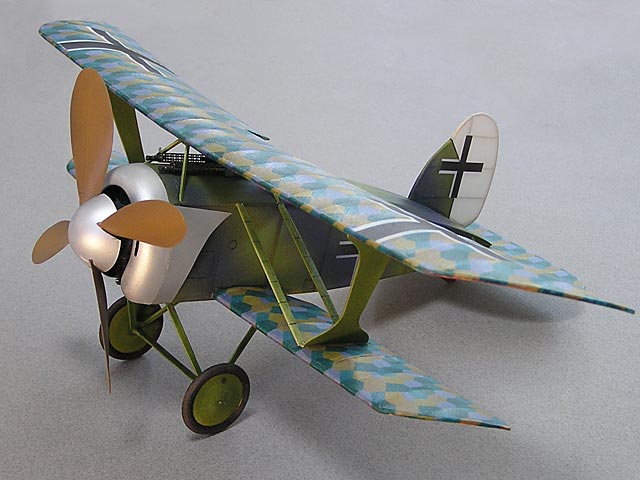 Hi, Steve & Mr. Wagner! Mr. Wagner notes with his fine Albatros D.XI plan submittal that the accompanying Flying Models article could be provided if requested. Since Flying Models magazine is on a brief 'hiatus', perhaps he would supply it! I know, Steve, you’re extremely busy…even more so having to extricate the Model Builder plans! So, maybe Mr. Wagner won’t mind this request coming from another Outerzone fan! Thanks to both of you!!
Don - 27/01/2015
Hello friend I would like to ask you where you get the camouflage pattern for the page wings you can download.
Thank you
Luciano - 01/06/2020
In the article it says that the printed lozenge tissue was bought from Robert Wells, and there is a contact email address.
SteveWMD - 01/06/2020
Also, Luciano could try Mike Stuart's website, Mikes flying scale model pages, at www.ffscale.co.uk/loz.htm where there is a feature that he might find useful.
David Foster - 01/06/2020
Add a comment