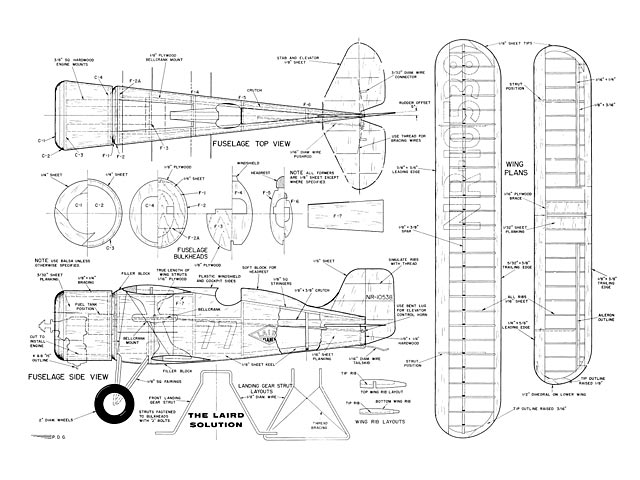 Quote: "The only biplane ever to win the Thompson Trophy Race, the black-and-gold Solution presented for U/C, .15's to .19's. The Laird Solution, by David Brazelton.

The Laird Solution has on its record a number of 'firsts.' It was ordered only about three weeks before the 1930 National Air Races by BF Goodrich for entry in the first Thompson Trophy Race. A modified Laird Speedwing, it represented Matty Laird's first attempt at building a purely racing type aircraft.

The Solution had only slightly more than ten minutes flying time logged when Charles 'Speed' Holman took off in sixth position for the start of the 20-lap, 100-mile race. By the fourth lap, Holman and Jimmy Haizlip, in a Travelair 'Mystery', were disputing second place having been lapped by Captain Arthur Page in his Curtiss XF6C-6, the only military plane in the race. Holman claimed first place in the 17th lap when Page was overcome by exhaust fumes and crashed.

Holman crossed the finish line to become the winner of the first Thompson Trophy, the first and only biplane to win the Thompson, and the first civilian plane to average 200 miles per hour in a closed-course race. The plane was cleaned up and flown by Dale Jackson to third place in the 1931 Thompson. Three Lairds were in the 1931 race, the Solution, Doolittle's Super-Solution, and Ong's stock Speedwing. Only the Solution and the Speedwing finished to signify the last appearance of biplanes in the Thompson.

Here is the Black and Gold Solution presented for reproduction at 1 in = 1ft. It is an easily built, sturdy model for engines from .15 to .19 cu in displacement. The construction is common crutch and former and will go together easily. The following instructions point up some of the more important points and the decoration. A study of the plans and instructions, a trip to the hobbyshop, and you are ready to build a fine scale sport plane.

The lower wing is built in the same way, with the exception of the two inner ribs, which are not installed until the 1/2 inch dihedral is cemented in. The trailing edge should be cut for the ailerons after the wing is completed. The wing and ailerons should be covered and finished separately..."

Article, thanks to pit. 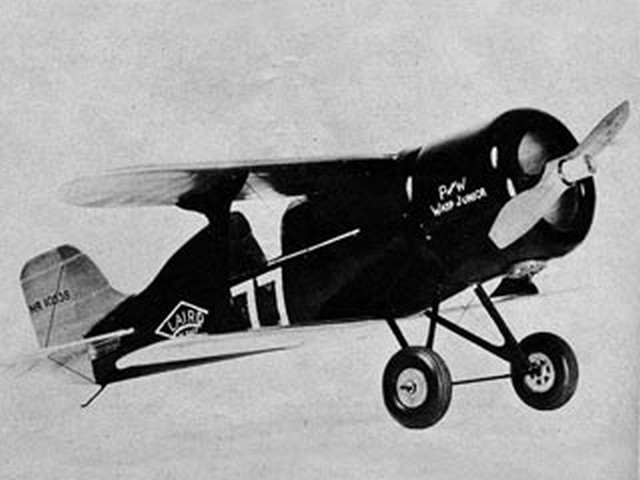