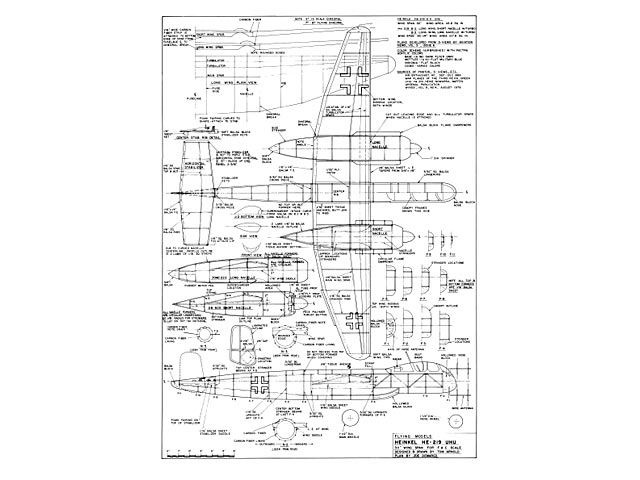 Quote: "Scourge of the German skies in WW II, this jumbo F/F scale model of the night fighter can be the sourge of FAC events. Heinkel He-219 Uhu, by Tom Arnold.

Designed to carry the early bulky and heavy radar intercept gear, the He 219 sprouted a forest of antennae on its nose, and carried some of the heaviest armament in the sky in the form of eight cannons, including the effective 'Schrage Musik' installation. Forced the indignity of flying backwards, the enlisted radar operator had no less than four radar screens in the later models to guide the pilot to visual range of a target.

Equipped with compressed air powered ejection seats, heavy firepower, the latest in electronics, new tactics, and special camouflage, the He 219 was truly the stealth fighter of its time. There was no controversy over its effectiveness by the aircrews. In fact, it was wanted so badly, complete airframes were constructed out of spare parts! Like today's new aircraft, politics and bureaucrats strangled all-out production and the big night fighter got to the front line units in 'teasing driblets' as General Kaminhuber, commander of the night fighters, put it. Those driblets wreaked fearsome damage in the RAF bomber streams but even they could not stop the Allied onslaught and they ended the war for the most part, literally, out of gas.

On to the model. To the delight of twin rubber scale enthusiasts 45 years later, the He 219 in all its forms still gets the adrenaline pumping in its aircrew. The Uhu has that ominous Teutonic look about it that appealed to the author immediately and, after three models of it, it still looks fearsome in a tight climb hunting for a Lancaster overhead. The versions available are pretty intriguing and for the Flying Aces events, the versions that never flew are perfectly legal.

The biggest challenge of any twin is getting the longest nacelle possible for a rubber motor. The He 219 has a fair size in the short nacelle (the DB603 engine) with its only drawback the wing spar passing through the rubber motor area. The long nacelle (Jumo 222) was mated to only one example of the Uhu with a standard wing and for those building that version, no photos exist of it but it was coded KZ+RZ and probably sported the standard dappled gray paint scheme. Another version was the B-2 which was a short nacelled/long span aircraft designed to hunt the British nightfighter Mosquitos. The final model (the B-3) was the long span/long nacelle version which never flew as it was destroyed in a hangar by Allied bombs as it awaited the new Jumo 222 engines. Needless to say, this last version would be the best of the flyers for rubber power, Whatever you pick, they all fly best in moonlight!

One of the challenges of this twin is the location of the wing spar. It very inconveniently goes right where the rubber motor passes. An experiment, which was a great success, was the careful use of carbon fiber to allow the spar to be cut away and yet retain its strength. Carbon fiber always seemed a bit high tech (and high expense) for a traditional balsa wood and tissue man as myself and I always felt somehow I was cheating if I were to use it. After experiencing the results, I think I'll cheat a lot from now on. Carbon fiber stripped in thin 1/16 to 1/32 strips can save grief, repairs and make a lot of impossible designs possible. Its main strength is in tension and compression (to a slightly lesser degree) and by CA'ing a strip to the top face of the wing spar and then to the bottom, including the cut-out area, the spar becomes surprisingly rigid.

The best way to see this is to glue up some test pieces and break them with your hands - the results are amazing. You will quickly start seeing places to use these black whiskers. By the way, do not get carbon fiber confused with boron fiber. Boron fiber is bad stuff, dangerous to handle, frays and shatters and some awful stories go around as to the health hazards. Carbon fiber comes bonded to a matrix that does not allow splintering or whiskers to pop loose to stab you. It will break but to tell you the truth, razor blades and dope fumes have done more damage to my body than carbon fiber ever could. Just use some common sense in working with it. To get a nice 1/16-inch strip, just nick the edge and peel up a strip. It comes off quite cleanly and even. Lay it down and hit it with CA or Titebond. You can cut it but be aware that it dulls razors and scissors quickly. I used industrial scissors for shapes other than strips.

Putting wings on the bird. Let's get started on the wings. Cut the spar to shape, including the cutout for the nacelle, and put in the dihedral break. Note the spar also angles forward from that point. Face the joint with a patch of 1/32 plywood, cracked appropriately, and soak it with thin CA glue. With a bit of work, a carbon fiber patch can also be used...." 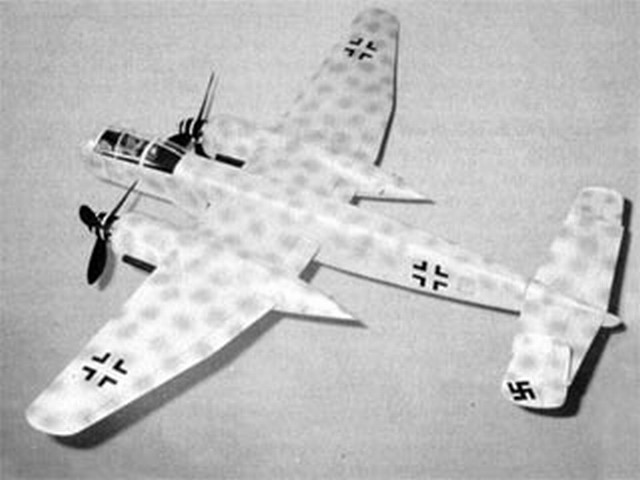