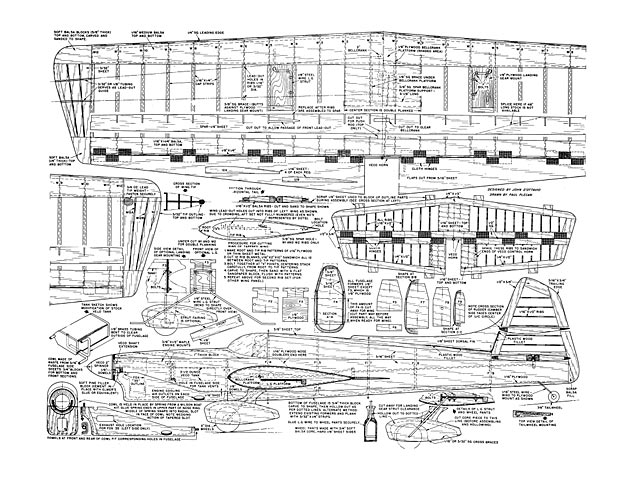 Quote: "Wonderful combination of good looks and stuntability makes the 'Jay Dee' a must on every serious stunters list - performance for Juniors puts this stunter in best of class. Jay-Dee Falcon, by John D'Ottavio.

In this exciting and wonderful hobby of ours there is a select group of modelers who demand the utmost from their aircraft, and to this end the Jay-Dee Falcon was built. Stuntability and smoothness which are major concerns of competition minded modelers arc built into this airplane. Present day stunt has reached a very competitive level and requires an airplane capable of performing the stunt pattern as near perfection as possible with a high degree. of smoothness. Also you require an airplane capable of impressing the judges with its beauty. Let's face it - the day of the mediocre stunt model is over at least in the highly competitive areas throughout the country and the FAI Internats.

From the first season in competition, the Jay Dee Falcon had compiled a very impressive record and the author is proud to state that the majority, and the largest of the trophies were won by juniors. Buddy Wieder, (NJAYSC) of Parsippany, NJ, and George Jones Jr of Paterson, NJ, between them have a beautiful collection of trophies. The medal shown in the group picture was won at the '61 NATS by young Wieder where he did an excellent job by winning fifth place in junior stunt, more creditable because this was his first year in competition. It was in the spring of '59 that George named this plane the Jay-Dee Falcon and decided to build one for himself and after completing his model he entered it in the Union meet and won first place in stunt which coupled with a first in rat racing, gave him enough points to take high point trophy, which is a beauty. Since then he has run up a very impressive record.

At Rich's Hobby-town in Parsippany, NJ where the NJAYSC was held young Wieder emerged as state champ after a very tough and competitive meet, George Jones was runner up only five points behind Buddy. Both of these boys have a very nice collection of hardware considering that they were competing against some of the best in the country, After winning the trip to the Nats, Buddy built a Falcon and only had time for eight flights on the morning before it was packed for shipment. Against the hot Texas Sun and some good tough competition he placed fifth which is a credit to his building and flying ability. At the Paterson, NJ Air Meet (Circle Burners) Buddy placed 2nd in stunt and second in beauty, so one can see that both of these lads will have to he watched in the future.

Now, construction of this model. It can be built by the average modeler without any trouble. A word of caution here about the selection of wood - keep it light as this is a large model. To those of you without too much landing experience, mount the gear in the fuselage on former #F3. The weight of the models averages 44 oz..." 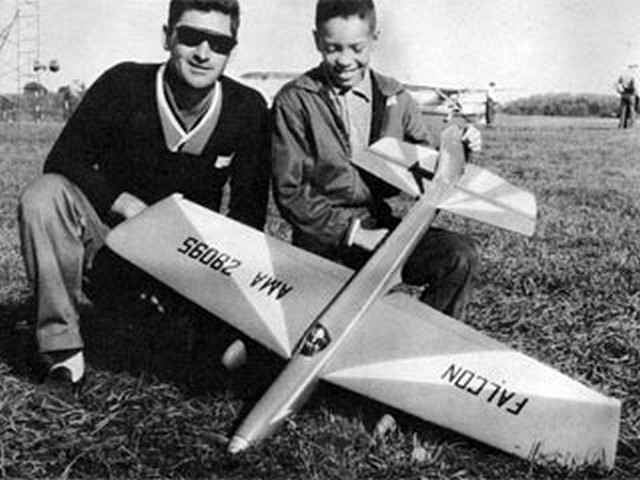