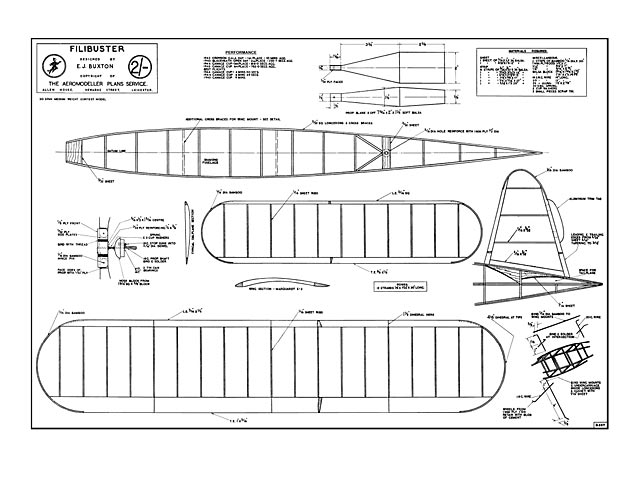 Quote: "THIS tough model airplane, suitable contest flying in any weather, is the most recent development of a line of similar jobs. Its ancestors flew in competitions on days when trees trembled like jellies with St. Vitus' dance.

Starting in 1943, Model No.1 passed away early in its 'life,' for 6 minutes, to win the rubber-driven class of the Croydon Club Gala Day. A few weeks later, Model No.2 had an even earlier demise, the first flight it ever made (an out-of-sighter) proving long enough to take second place at the Blackheath Open Day. This model was retrieved, and after some manipulation with the wing areas and the wasting of two contest flights on trimming, its third flight produced sufficient time to finish it fifth on the result sheet of the KMAA Biplane Competition. The next edition worked out third in the 1944 Gamage Cup with an aggregate of 818.0 seconds, the third flight being 409 seconds OOS, while Mark V took fifth place in the 1945 Gamage Cup on a two-flight aggregate of 782.0 seconds, the model being lost on its second flight after 9 minutes.

The development which has taken place over three years has produced a model rugged enough to stand up to the wear and tear of both sport and contest flying. A noticeable feature is the low aspect ratio wing; the large chord making for both increased efficiency and lightness in construction for a given wing area. Naturally the low aspect ratio gives a prop diameter of over half the wing span, but on the basis of wing area everything is normal.

Construction. Fuselage. This is built in the normal manner, 1/16 in gussets being added at wing mount and undercarriage junctions after these items are bound in place. 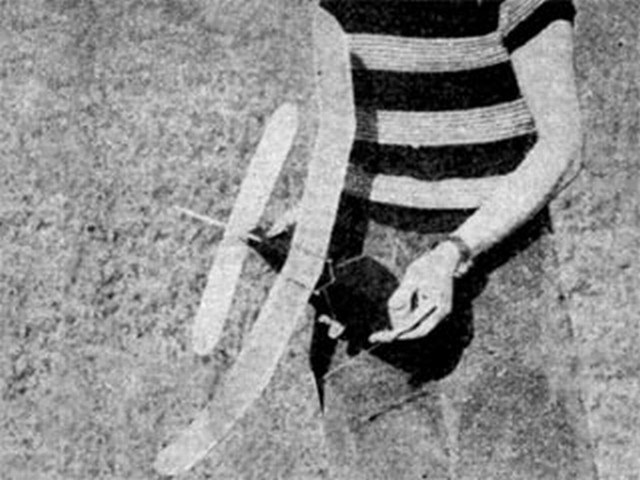