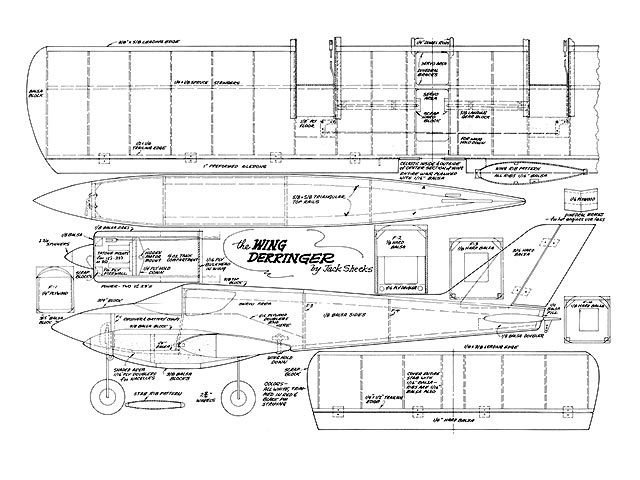 Quote: "Over the years I have read many a model article in the various magazines and most of them start out expounding upon the virtues of the design, how great the model is, or how experienced the designer is. The rule of rules seems to be that each design should be the direct descendent of the Great Tinkertoy God or aeronautical equivalent.

This ship does not exactly fit this standard description. It hasn't as yet been tested for years and its Grandpappy didn't win at the Nationals. It is what the teenagers of today would call 'A Happening.'

The idea for this ship was first conjured up last winter in Byron Martin's garage full of models. He has a pile of kits and engines dating back before WWII. While thumbing through airplane books and huddling around a space heater, we ran across a new twin-engined ship called the 'Wing Derringer'. It looked as if it would make a great R/C design, but I had my doubts about my own ability to handle the ship on two fans. Friends you don't need, 'cause they only help egg you on with the thought that you can always get someone to help you with the first flight or two. (Watch out for the third!) Go ahead and build one!

Being a very gullible fellow, I rushed home and feverishly finished the project I was already wound up on. I had to finish some extra ships up to last me through the season. They don't call me 'Crunch' for no good reason.

Being a poor fellow, (Donna went shopping) the next thing on the agenda was to locate enough balsa to build with. The search started in the scrap box, then through the old kit boxes and next, raiding all my friends' lumber reserves. Finally I ended the quest in my boy's room to salvage any scraps which they had not yet fully pulverized. Together, all sources yielded enough of the good wood to build anything in the Air Force.

With no set size in mind, I drew up the body side. It looked good, like a body should. After constructing this masterpiece I immediately (two weeks later) started on the wing. All the ribs were made the one size, simple enough for even me to figure out.

After completing the construction and a brief recuperating period to let my fingers heal from the razor knicks, it came time to finish the ship. Being a lazy soul, I had eyes for a quick and easy MonoKote finish. Byron got all bent out of shape over this and felt the ship deserved all my endless hours laying on a good covering, dope and paint job. By the time I had finished, the ship had three kinds of dope on it, mostly Byron's, which should teach him something! On the final coats of clear dope, we ran out and used a new dope sold in Indianapolis as Buty-Flex. This worked beautifully and it looks almost like plastic after rubbing it down.

After showing off the new twin-bird, I was faced with stony faces in my quest to find someone to test fly it. Since I fly standard sticks and Byron flies a silly stick, that let him out. (Saving face.) After much consideration, I tackled one of the best flyers around, Jim Goad. He was getting ready to test two new machines of his own that week, so one more wouldn't have much effect on his already raw nerves.

The day of reckoning dawned and we headed out to the chosen field to do battle with Murphy's Law. By the time I had all the junk unpacked from the trunk and ready to go, I found I had a pit crew second only to AJ Foyt at the 500 race. Ed Reiche was voted best throttle man in town, Byron as the engine starter, Bill Hopper and Dan Martin to hold the beast down, while I, it was decided, could do no real harm as the busted prop changer.

After fussing with one engine for about a half hour, we finally got a decent engine setting and proceeded to try a take-off. Try is all we did through, as the tall grass broke the starboard prop. After two circles we decided to shut things down. Whenever this happens, be ready to chop the throttles quickly. The second try ended the same way, and the third just had to be it. I was about out of props.

Finally, both engines roared to life and we were off and running again. The ship caught on the tall grass again, hooked to the right and broke ground. Once airborne, it flew like a homesick angel. I'm glad I had Jim at the sticks this time, because I fear if it was up to me, there would have been some sort of a mess to clean up - 'fast' describes the flight in one short word.

We soon discovered that a pair of .15's would have been plenty adequate to power the Derringer; however with .23's aboard, it was exciting to watch. I had never seen a twin perform before, so this was a real experience for me. After he'd put the ship through its paces, I asked him to bring it closer to the deck for photos. After taking a gob of them I discovered that we were shooting on transparency film. They'll look good on the wall at the club meeting, but that doesn't help us on these pages.

After what seemed like an eternity, we decided to make a pass at the runway and try for a landing. On the approach, that fussy engine loaded up again and quit, so Jim shut both off and started in. Due to the premature stopping of the engines, the ship couldn't quite make the field again, but he did a gine job of setting the ship down in soy beans. It flipped over and the crackling noise was my last 9x4 prop, which shot chances for the rest of that day.

After the tension had subsided, we discussed the ship in general. About the only real change to be made was to give the ship more elevator throw, or to use lighter engines. Other than that, the little ship performed very well and it was a sight to see in the air. Before flying it again, be sure to break in that starboard engine, as premature quitting on a twin is liable to be disasterous. It's basically a good ship.

As for construction of this ship, it's very basic, standard and simple, so we won't go too deeply into it. Besides, if you are in need of a step-by-step construction procedure on this ship, you'd better not build it. Twins take some background.

There are a few points we could pass on to be of help. First, build it strong! The ship is rather fast. Secondly, make sure there is little or no slop in the throttle linkages as it is rough to set the engines if there is much difference between the two. Also, it would be a good idea to install .an extra Nicad to keep both glow plugs hot during the flight. This also helps on low motor.

When building the ship, try and keep everything straight. This makes the difference between a good model and a wreck going someplace to happen. Weight is not a large factor, but it helps on the glide if it is on the light side. Our original weighed in at 5-1/2 pounds. And, profit by our experience, have two well matched broken-in engines before attempting to fly..." 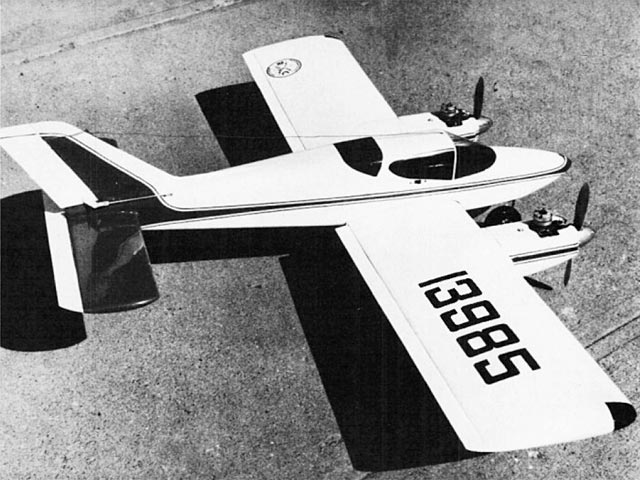