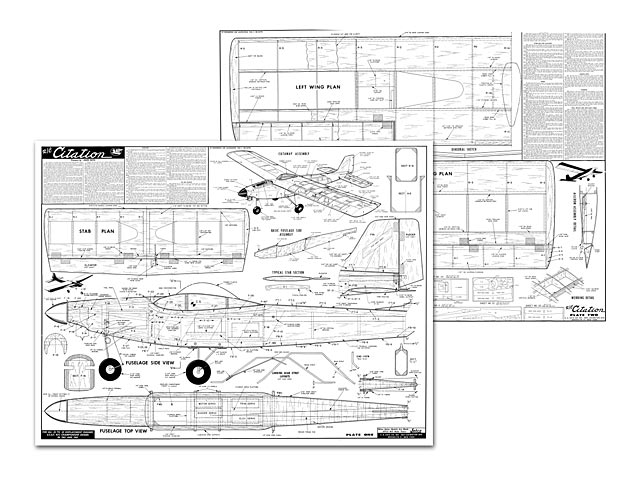 Quote: "The Citation is an easy-to-fly, easy-to-build multi-control airplane. While one often hears such remarks about various multi's, the Citation is a most practical airplane from every standpoint. It has won and placed at many contests, yet is an enjoyable ship to fly for sport. For its performance and maneuverability it is surprisingly simple to construct, to fly and to maintain.

During three seasons of competitive flying, I had occasion to use up to nine kit low wings. For obvious reasons, building time had to be minimized; the attrition due to practice and competitive flying in all sorts of weather, crowd and field conditions implied frequent building of replacement airplanes. This problem was compounded, of course by the maneuvering limitations and other qualities of the designs I was flying. For example, one of the popular low wings was notoriously tricky on the approach, which made hazardous touch-and-go and landing maneuvers under marginal conditions.

A detailed study was made of the ideal qualities that ought to be present in a practical top-notch Multi. The Citation was the result. In three seasons I have now had to build only three machines and, if when a replacement does have to be constructed, it requires not much more than half the time previously required.

In addition to simplicity and practicality, a good multi should possess certain other special attributes and chief among these is an almost automatic quality to its flight performance in order to minimize piloting corrections, both on the ground and in the air. Corrections can aiways be seen and can cost points. The necessity of making corrections, complicates piloting technique, making for inferior maneuvers. The fewer the corrections necessary, the easier and quicker the maneuvers and the more points scored. Even for the Multi beginner or sport flier this is important because it permits the effective accomplishment of many stunts and maneuvers which normally are sloppy or actually unrecognizable. There should be a high order of stability throughout the approach and landing maneuvers.

Light weight is important in many maneuvers, notably the vertical eight where the entry is at the bottom of the eight, and the outside loop at the top of the eight - this is where a loggy machine is at a very great disadvantage. Lightweight shows up on takeoffs and when an approach is slow. The heavier machine will look bad in climbing maneuvers and on outside loops, particularly when three consecutive outsides are performed.

Actually, my ships were even built slightly lighter than the kit, with the nose doublers cut out and 1/16 sheet used on the wing. However, it is quite difficult to avoid dips in the 1/16 sheet and any dips could cause the craft to turn slightly, or drift, from the desired flight path at varying speeds - which would mean annoying corrections. The use of 3/32 sheet for the wing in the kit guards against this possibility and gives enough material for sanding without thinning the material too much. The slight weight added by the solid nose doublers cannot be noted in flight and provides more strength in the nose area for less experienced pilots who may suffer minor mishaps. Your Citation kit provides an optimum strength-weight ratio. It definitely is a light airplane.

The tricycle landing gear today is almost essential for ground maneuvering points. The three-wheel gear tracks far better on takeoff than the two-wheel gear. On one occasion a helper accidentally turned off the receiver switch just before takeoff. The Citation made its takeoff run in fairly deep grass and lifted off for a good climb out, so obviously its takeoffs are automatic, usually requiring no trim or elevator control movements until the ship has made its 360° and come back over the transmitter for straight flight, where a touch of 'down' trim normally is required. The nosewheel allows use of a one-wheel brake, whereas two-wheel gears require two brakes.

The shoulder-wing has many advantages, in my opinion - I say this after long experience with low wings. For the new Multi flier it is particularly important. If the beginner does bang into the ground, the wing can detach more readily, whereas, on the low wing, it is trapped between fuselage and ground, and stopped by the nose gear, with the result that more wing damage is caused. This damage is increased by the presence of a landing gear assembly built integrally with the wing.

I found that no thrust offset were required for Citation. Right thrust required on most low wings Joes compensate for a left turn tendency due to tcrque, but offset thrust is not equally effective at all speeds.

For the beginner, the wing tips, being higher on the shoulder wing, scrape the ground less often than those on a low wing - there is more leeway when a wing gets down close to the deck... 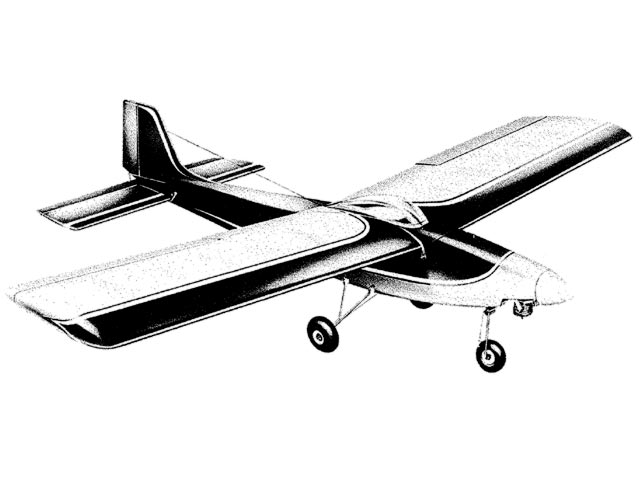