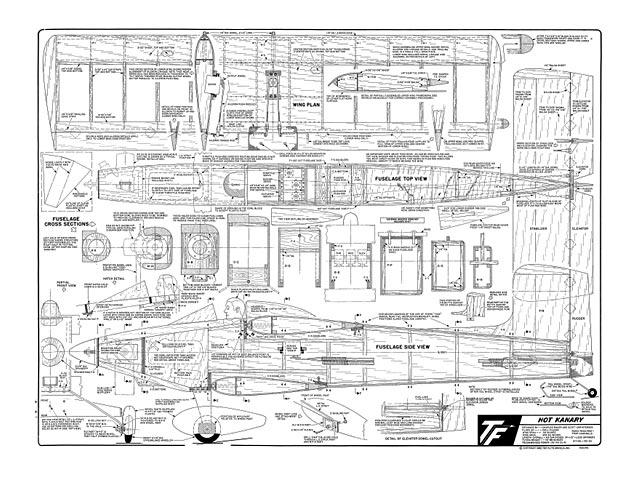 Quote: "Hello, I've found a lot of great plans lately on your site. I'd like to contribute if possible. Attached is the Top Flight Hot Kanary. As far as I can tell, these plans are no longer available. I scanned this copy from a kit that I found."

Top Flite's latest addition to their stable is a Stand-Off Scale model of a nifty little biplane called 'Hot Kanary.' All the goodies come in a very colorful box measuring 45-1/2 x 7-1/2 x 4 in.

Upon opening the box you see a very neatly packed kit. The die-cut plywood has its own compartment so the balsa parts are protected from gouging by the harder wood. The hardware package is very complete including pushrod material. All parts are easily identified.

Construction: Die-cutting on the balsa parts is very good with a light sanding needed to remove a little fuzz. The plywood die-cutting is also good. The parts just fell out of the sheets. Great! Quality of the balsa was very good. All parts fit very well and go together as planned. No special equipment is needed. If you have built before, you are ready to build this one.

The kit contains one plan sheet measuring 36 x 48 in, very clearly drawn and a very thorough twelve page instruction book which also has very neat drawings with each phase of the building. The book opens with a very nice introduction to biplanes and some notes on the Kanary. Pre-construction notes are next and then into the fun of building this nifty little bipe.

The wings are built first and with the help of today's modern bonding agents they build very quickly. The ribs have a neat innovation that this builder hasn't seen: building tabs with a slot to allow installation of the bottom TE planking with the wing still on the board. The top wing is first and easy, no ailerons. Next, the bottom wing with excellent instructions for aileron installation. The tail group is next and very simple and straightforward.

Now for the fuselage, and we would like to dwell on this for a moment. This section starts out with three questions that, when answered, will let the builder move forward on the fuselage construction and not worry about how things are going to fit. In fact, these questions should be answered on any model you choose to build. The fuselage finishes straight and strong. Landing gear is next, then final assembly, covering, radio installation and some excellent notes on flying. Pacer Zap and Slo-Zap with Zap Kicker were used throughout construction except where epoxy was called for.

Covering: The model was covered with Top Flite's new charcoal MonoKote, with a yellow band on the fuselage, yellow stars and star bursts on the upper wing. Very pretty. In order to make the wheel pants match the charcoal MonoKote, we mixed equal parts of K & B Super Poxy aluminum and black. It made for very sharp wheel pants.

Radio: The radio compartment has more than ample room for any radio you want. We used a Futaba 8JN.

Flying: Now, hang onto your hat, the fun is about to begin. With everything checked and set according to the instruction manual we headed for the field. The weather was fair and cloudy. We fueled up our little jewel and made an engine run to check everything. All systems in the green. Top off the fuel, start up and taxi out. Ground handling is above reproach. Turn into the wind, take a deep breath and open the throttle smoothly. The little ship accelerates rapidly and lifts off cleanly. Gain altitude and check trims. Two clicks left wing down trim, two clicks up elevator and everything is great. Two clicks of trim on a Futaba 8JN is very minor, so we are going to say it flew right off the board. And fly it did. Very fast and solid. Rolls, snap rolls, spins, vertical roll, you name it, this ship does it with ease. As the instruction book says, this ship will become famous for knife edge flight. This builder has never attempted sustained knife edge flight, so it was very rough the first few attempts. Before long, the Hot Kanary was flying all over the sky in this fascinating maneuver, in a straight line that is. Knife edge turns are next. The ship slowed down nicely and cruised along solidly at half power. Pull the throttle back to idle and the glide is very clean and controllable, flare for landing and touchdown smoothly.

Conclusion: This is not a beginner's airplane, but if you are ready for some excitement in your flying, try a Hot Kanary, you'll love it. As stated, the ship builds easily; in fact, a beginner could build it but flying takes an experienced pilot because of the ship's quickness. The kit is a value at retail price because of the completeness of the kit." 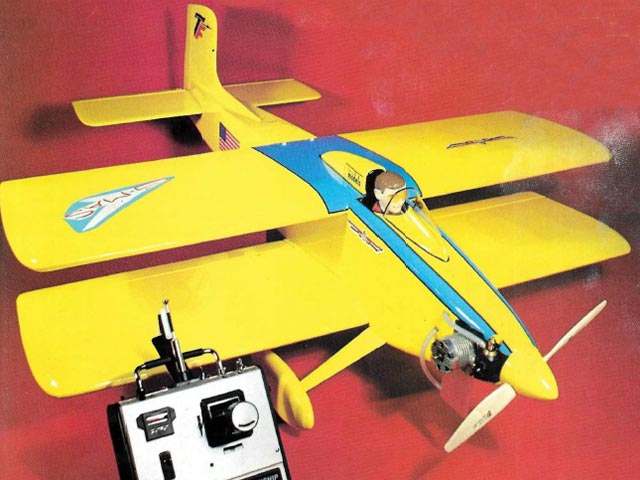 Hello Mary and Steve - pictures from my Model the Hot Canary from Topflight [pics 003-005]. This Week is Maiden Flight. Greetings,
BerndLangner - 30/06/2017
Add a comment