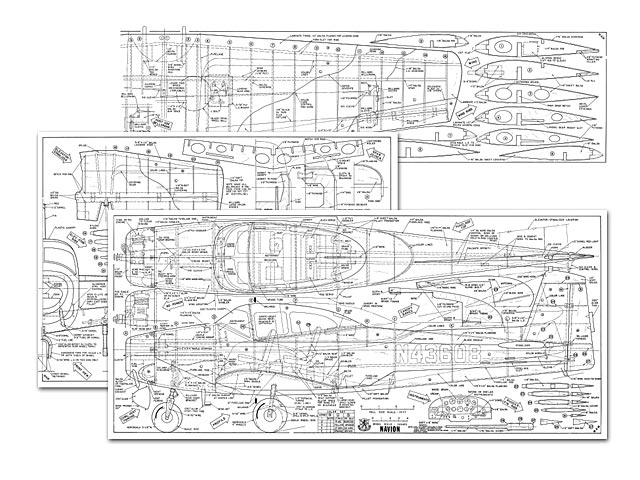 Quote: "The Full-Size Navion has always been a fascinating model project and, after years of procrastination, we finally developed a 2 inch to the foot or one-sixth size stand-off replica of this outstanding four-place private plane.

Impressed at the onset by the enormous bubble canopy and the roominess of the cabin area, we at once visualized a sliding canopy for access to our R/C equipment tucked neatly between the seats on the cabin floor thus eliminating the need for unsightly and annoying hatches. The trike gear was mandatory and the snappy appearance. and wide selection of color schemes certainly didn't turn us away. The story of the full-size Navion complete with photographs, both civil and military, interior and exterior, appeared in last month's issue of R/C Modeler.

R/C equipment in the prototype model was an Arista-Craft Microprop 72.250 MC six channel transmitter/receiver, however only five channels are active. The five rotary servos actuate the rudder; elevators; ailerons; engine speed; and nosewheel steering. We elected to use a separate servo for the nose wheel steering instead of coupling it to the rudder control after witnessing a heartbreaking wipe-out in which a trike job cartwheeled across the field when the flier kicked the rudder, which was coupled with the nosewheel, just as the wheel made contact with tlu ground. Even if the odds are against this ever happening again, why take the chance? If we had it to do over again, flaps and/or retracts would have been installed in our model but not at the expense of the steering nosewheel because that is a must when taxiing a trike model.

The construction of our model is essentially conventional using time proven balsa, plywood and fiberglass materials. Of course this does not prohibit the substitution of other materials such as foam, etc. Two basic construction philosophies have been applied to model construction for many years; both successful and each with its die-hard followers: The first, used since the pioneering days of ROG tractors, twin pushers and bent bamboo, depends upon a complex structure utilizing a multiplicity of relatively hard, small cross-sectioned members such as multi-spar wings and longeroned and stringered fuselages. The second and more recent structural development is the application of larger cross-sectioned members of .a medium or soft texture using fewer pieces and, thereby, simplifying the structure.

The most recent development in the latter philosophy is the use of foam. Our model adheres to the latter philosophy using a single spar, thick leading edge wing coupled with sheet balsa fuselage sides and top and bottom planking which thickens toward the nose for strength where it counts. The all-up weight for models built with each system is basically the same. The use of thick, soft textured materiels makes routine nicks and dents easier to repair and less apt to seriously damage the thick structural members whereby, although stronger for a given cross-section the thin member resists minor impacts until it gives way and .snaps. Then the repair becomes a problem. Further, we feel that the softer high cross-section construction is more fun to build and is easier to develop into a scale replica. It is assumed that the builder of this model is somewhat experienced, therefore it is not intended to touch on every construction detail.

The powerplant can be from .40 to .60 cu in displacement. Initial flights were made with a .60 and, although very successful, we weren't ready for all that reserve power and it sort of took us by surprise. We like to retain the character of the prototype airplane when we fly its miniature replica so it amazed us when the Navion climbed like a Messerschmitt! We decided to try something smaller and it was a simple matter to modify the mounts for a .40. The flight characteristics were then more in line with our expectations by behaving much like the real thing..." 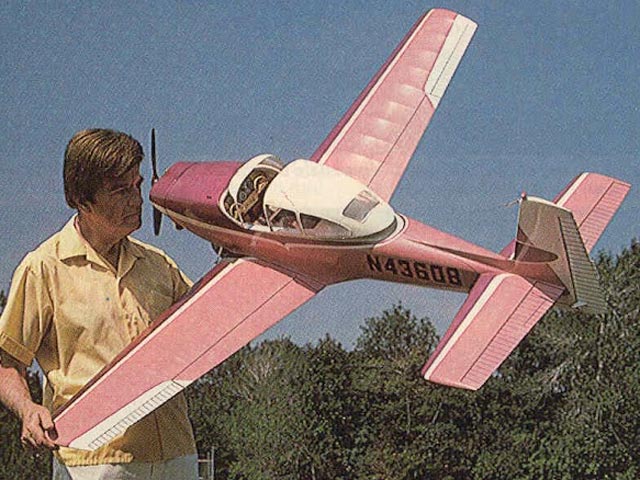 What a fantastic plan! Cowl and canopy (2 part) available from Fiberglass Specialities. Has anyone seen a retract version?
Marty - 27/06/2014
Add a comment