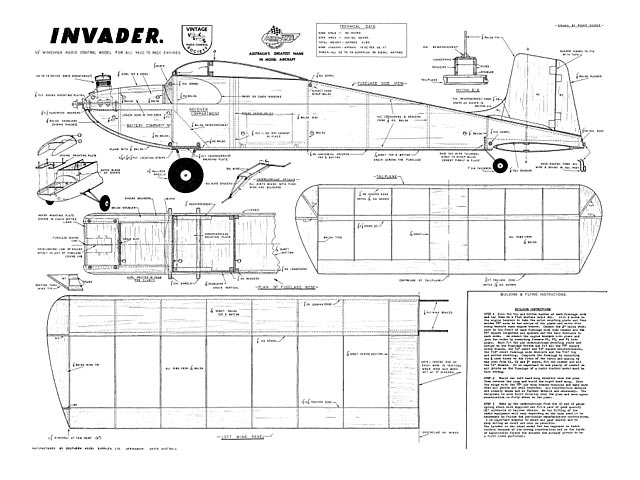 Quote: "A 50-inch wingspan radio control model kit for 1.5 to 2.5 cc engines. The Invader is a proven performer and is ideal for a first radio model. Beginners will appreciate its simplicity and ruggedness, while experts will acclaim its wonderful performance." 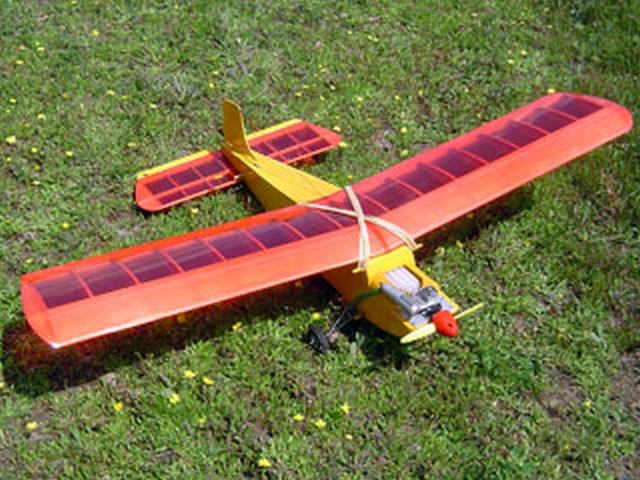 I put a lot of work into cleaning this plan up and straightening all the kinks out. Turned out pretty good I think. Hope I didn't miss anything.
SteveWMD - 24/06/2014
Hi Steve, As soon as I saw this plan I needed to reply. The Invader plan I have was from a mate whose Father built from an original kit. I was only about 15 years old when I built my Invader from this plan. I had many flights with it until it ended up biting the hard stuff when I tried to do a loop from a spiral dive at good height and on recovery hit the opposite button and nothing happened. What I did not know at the time was that PANIC set in and I did not wait long enough to see what happened with a button push and HOLD, referred to as Dumb Thumbs. All the radio gear survived in all that foam rubber and G pad. My original plan shows a distorted wing layout, so this would have been what was noted in the clean up of this plan. I did build my wing true because of my free flight building and trimming before starting R/C flying. I was now 10 years into this wonderful Hobby. This Invader was my second R/C model aircraft after the Aeroflyte Mark1 HUSTLER single channel model of the very early 1960s with an escapement on the plan as power to the rudder. Mine had OS PIXIE single channel radio with an OS S103 rotary electric Servo. All you got was a Receiver (R/X) and the Transmitter (T/X) in a box and the Escapement or if you could afford it Servo's separately. You had to do all the wiring yourself with the radio gear, it was not ready to go when you opened the box. I somehow managed all this at age 13 because my father was from the old school and showed me how to solder the wires onto the Receiver and the 7 pin plugs. I thank AEROFLYTE for what they gave to us very young starters in this hobby in Australia. I look back on it now and think? Was the INVADER our Australian version of the 'LIVE WIRE Trainer' from America? Getting back to the Aeroflyte Mk 1 Hustler, I still have my original kit plan and kit box and this model flying on RUDDER ONLY flew very well, with the Gordon Burford GLO CHIEF 19. My second (Mk1) Hustler built as a 3 Channel model from this plan also flew very well and is now around 45 Years old - still flying on an OS 25 FP which is lighter and more power full than the early OS 35 at the time. The Mk 1 Hustler is virtually unheard of here in Australia even though it came from an Aussie Company, and many think my 3 channel version is a modified Mk 2 which came out much later as a 3 Channel version. It also had a wing kit with Ailerons. My memory tells me that this plan of the Hustler was the first or second R/C model kitted by Aeroflyte, if not please read the last line. I would be glad to scan and send it to you. What you are giving us Aero Modelers Steve is a chance to get to build from the many plans that never in my life time would have been possible. Memory lane is a wonderful thing if I could only remember what it was. Now where did I put that Memory training book?
GaryButton - 11/07/2014

- 11/07/2014
Hi Mary, here are a few photos of the Aeroflyte Invader I just built from the plan on Outerzone [model photo & more pics 003-005]. And even a link to video of its 1st flight: www.youtube.com/watch. Mine uses an OS 10 LA engine.
anon - 24/07/2017
Here are a few pictures of my Invader, throughout the ages ;<) [more pics 006-012]. At first (in 2010), it flew at 38 oz. with an Enya 15-IV, and very well at that. Then in 2014 after much flying, I thought I would make it a bit more aerobatic if I fitted a Supertigre G20/23. There was not that much difference, the silencer being quite restrictive. A Fox 25 took its place and it began to move along. Then this year (2017) I was given a Supertigre S29 with the larger silencer, with which it really scoots at 50 oz. flying weight and will loop from level flight when applying full throttle. But during all this time, I could not make it take off because it would ground loop. So, I added a nosewheel and now I really enjoy flying the Invader. It is such an incredibly versatile workhorse, yet definitely very agile, so much fun. It is all the original advertisement claimed. Present trim is with -2.5 degree tailplane incidence (instead of 0 degree - I cut 1/4" off the rear of the tailplane saddle) and C.G. moved forward at 24% (slightly in front of the wing spar). Engine is at 0 degree down thrust and 1 degree right thrust. Next and probably final step will be to put some engine up thrust to tighten the loops a bit. Thanks again for the Outerzone, best modelling regards.
JMP_blackfoot - 18/09/2017
A picture of the invader I built from the plan on Outerzone [more pics 013]. Flies like a dream with a single channel unit built with an encoder from Phil at www.singlechannel.co.uk - Motor 2212 1000Kv, propeller 8/4, and a lipo 3s 1400 Mah.
Victor - 13/11/2019
Add a comment