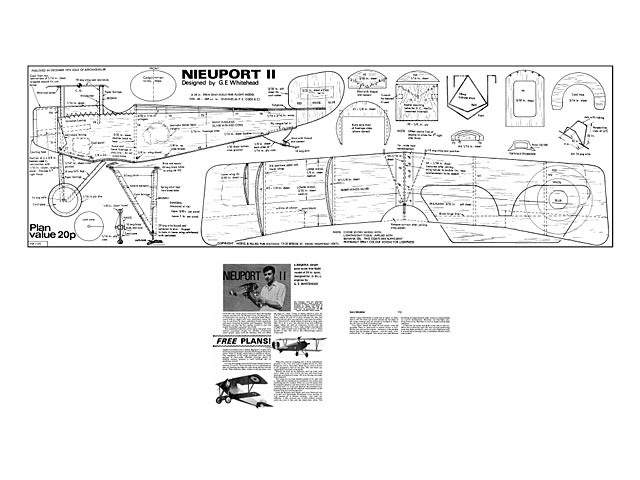 Neuport 11. A 24in span semi-scale model for free flight or R/C by GE Whitehead. Free plan with Aeromodeller December 1972.

DURING the critical period when the Fokker Monoplane reigned supreme over the Western Front, the Nieuport 11, its diminutive size earning it the nickname Bebe (Baby), armed with its single Lewis Gun, performed valiant service. It was flown by many celebrated French squadrons and pilots, including Guynemer and Nungesser. The little Nieuport was also the first combat aircraft to carry the famed 'Escadrille Layfayette' into battle.

This simplified model has all the agility and grace of its full-size counterpart despite the all-sheet construction which greatly eases both the building time and effort needed to produce such a replica. Beginner or expert alike will find much enjoyment with the fine flying performance of this 'Class II' model, which looks so realistic in the air. The sweepback of the wings combined with the small amount of (non-scale) dihedral, provides plenty of stability without recourse to such 'artificial aids' as pendulum control.

Cut out all fuselage parts and bind the cabane struts to formers F2 and F3. Score the sides at F4 as mentioned on plan, by pressing the edge of a ruler along the line into the wood. Then bend the sides, without cracking them, over the edge of a table. Using an impact adhesive, glue the 3/32 in sheet doublers in place and add the bearers if used. Next, cement F2 and F4 in place between the sides and join the tail end, all in one operation, and check for squareness.

Note that if a radial engine mounting is being used, then F2 is set to give the required down and sidethrust angles. When set, add all remaining formers and the stringers, followed by 1/16 in sheet cockpit coaming and 1/32 in. sheet bottom (not forgetting the 1/16 in sheet doubler at tail). The 1/16 in ply undercarriage support comes next.

Make the cowl by wrapping two 1/16 in laminations around a 1 lb. Tate and Lyle's Golden Syrup tin, then fitting the 3/16 in face plate. Bend the u/c wire as shown in the perspective view on the plan. The rear struts are supported by the lower wing bands.

Wheels are built up for lightness, and are made with 1/8 in sheet 'tyres' on a 1/16 in ply disc, with brass bush bearings and postcard cones. All strut fairings are made from postcard.

The wings are cut from medium grade 1/8 in and 3/32 in sheet and are cambered by wetting the top surface and cementing the ribs in place. When set, join the panels with the requisite dihedral, and then remove the centre ribs and reinforce with 1 in wide tape. Bind on the interplane strut retaining tubes and add the celluloid reinforcement to the bottom wing strut anchorage hole..." 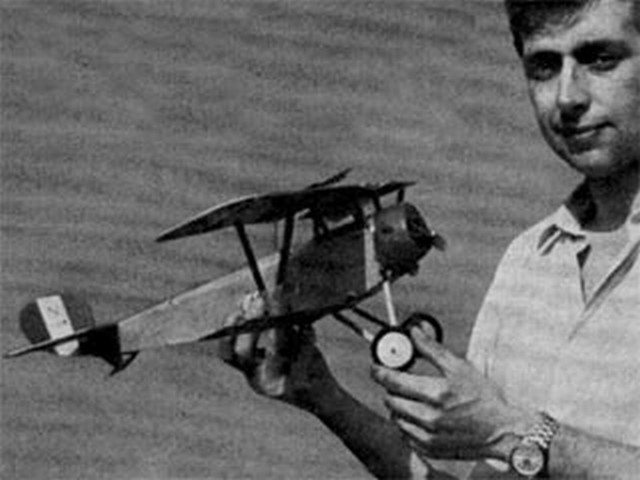