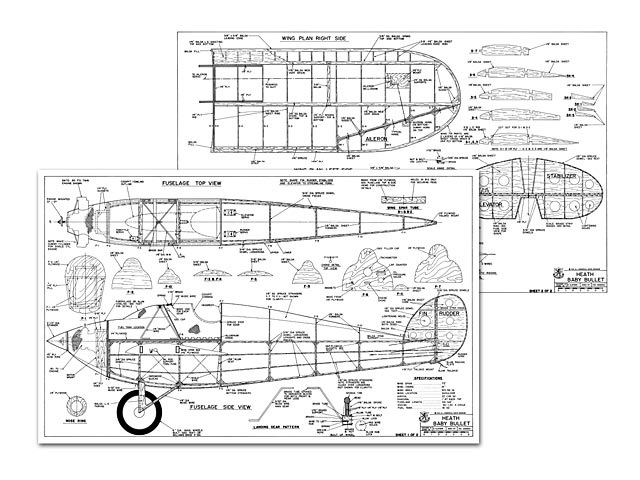 Quote: "Drawn from the original construction article that appeared in the 1930 Flying and Glider Manual.

The Baby Bullet was manufactured in one of America's oldest aircraft factories, the Heath airplane factory in Chicago. The Bristol Cherub engine of his Spokane Super Parasol had hardly cooled from winning the light and sport plane races of the 1927 National Air Races at Spokane when Ed Heath began to plan a light racing plane which would show its tail to the field at the 1928 National Air Races at Los Angeles.

As he made the long trip back across half the continent to Chicago, his mind was not occupied with the race he had just won. He was thinking about the best engineering and the latest knowledge of aerodynamics, plus the experience gained in 20 years of practical aircraft building. He was thinking about a racing plane which should be the smallest practical airplane in the world. It should carry a man and 75 pounds of ballast, in addition to fuel, and should do this at a speed of 145 mph using only 32 hp.

The plane was finally built and ready for its trial flights. It had been seen and admired by the flying men of Chicago, for Ed Heath was never secretive to visitors at his factory. Unfortunately, in the spring of 1928, a disastrous fire burned the main factory and all that was in it. The first Baby Bullet was destroyed. Another factory was set up and another aircraft was constructed. It was put through very gratifying trials August 23, 1928, the day after its completion. It was incredibly fast, and the ship was a sensation.

The Baby Bullet was shipped to Los Angeles in two crates. On arrival at Mines Field, the little racer was unofficially timed around the five mile course at an average speed of 142 mph. During this test, it easily passed an Army plane which was also flying the course and had an official top speed of 145 mph.

On September 14, Heath won the 300 cu in race for light planes and sport planes, defeating all the seven other contestants. The Baby Bullet lapped the other planes three times and won $1,500.00.

The Baby Bullet was a successful racing plane. It produced what it was designed for - speed to sufficiently make it the fastest thing in the world for its horsepower.

My model version of the Bullet is drawn from the original drawings published in the 1930 Flying and Glider manual. The model is built up the same way as the full scale was with longerons from round spruce dowels and with the original airfoil, the St. Cyr 52.

Building The Fuselage. The fuselage is a box made up from 3/16 in spruce dowels joined with epoxy glue and reinforced with 1/64 in plywood gussets. Use the fuselage side plan as a jig and make two fuselage sides. Moisten the dowels for the bottom longerons to make them easier to bend..." 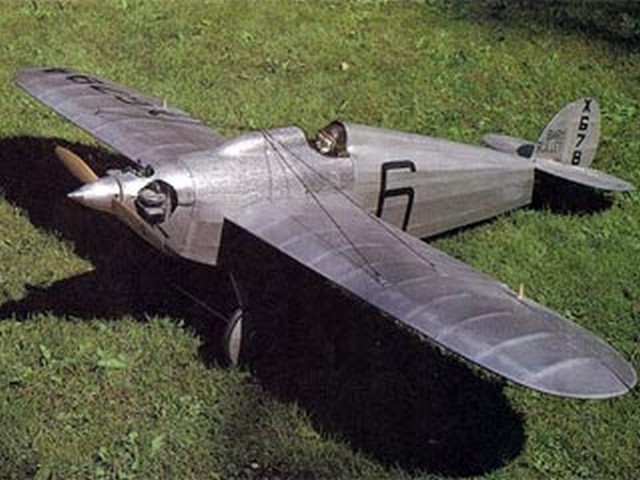