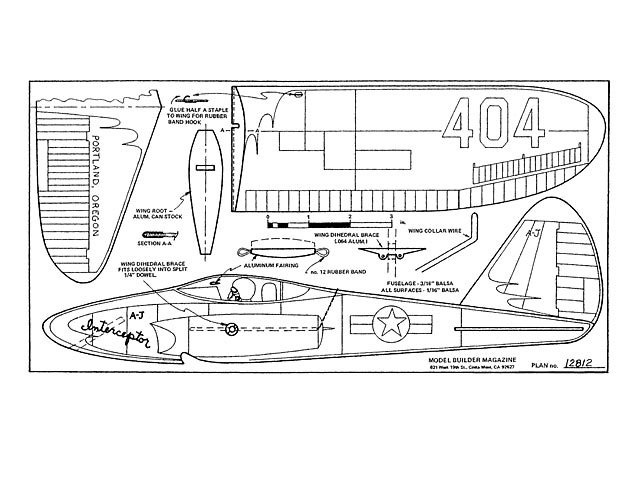 AJ Interceptor 404. Classic folding wing glider design. The original 404 folding-wing A-J Interceptor was by Jim Walker circa 1947, and was of course sold without a plan. This is a later plan from MB 1981.

Quote: "By DAVE THORNBURG - Building a replica of the A-J Interceptor, a model that separates the men from the boys. Only a madman would squander eight dollars and eleven hours of his precious modeling time to reproduce a 50c airplane. Unless it happened to be a very special 50c airplane. Like, say, one of Jim Walker's old A-J Interceptors.

Walker's American Junior Aircraft Company, up in Portland, Oregon, pumped out Interceptors by the thousands during the long decade following World War II. They came assembled but folded up in a narrow cardboard box. Slide them out, hook up the wing rubbers, slip the stab in place and your Interceptor was ready for flight. A launching stick and catapult rubber were provided.

To fold an Interceptor for launching was a simple matter. Two fingers under the wing trailing edges; lift them up simultaneously and rotate them both forward. Then fold the wing panels straight back until the tips meet each other just behind the rudder.

You'll notice a notch like a shark's mouth down under the nose. Slip the catapult rubber into it and aim the model - now more like a rocket than an airplane - straight up. Stretch the rubber and release her with your best slingshot follow-through. The rest is automatic. The Interceptors of my youth would arc swiftly upwards to incredible heights - higher than you could throw a corncob, higher than a phone pole, even - before their wings snapped magically open and they began their long soaring descent back to earth.

Only sometimes - and this is what made the Interceptor so special - sometimes they didn't descend. Sometimes they began circling, and they circled UP instead of down! Hey, hey! In my mind's eye I can still see my first lost Interceptor, spiralling off into the summer sky above the now-defunct South Dakota (Ohio) Airport. The year was 1952, and up till then I had only read about thermals in magazines. Long after the model disappeared, I could still catch an occasional flash of sunlight off its aluminum wing roots. Two weeks' allowance, gone with the wind! Ah, but the price, the glory of it; first kid on the block to thermal out!

And it seems that my story isn't unique. Whenever I take the Interceptor to club meetings, to the hobby shop, to the flying field ... I hear variations on the same theme. Tales that begin or end with 'Wish I had a hundred dollars for every one of then things I've lost...' The A-J Interceptor was arguably the best flying ready-to-fly ever to hit the market.

The inspiration for the model shown in the drawings came from a four-color ad on the back cover of a May, 1956 Model Airplane News. Let me make it clear that this is only an eyeball reproduction. I doubt that any of the originals still exist. (That'll get us some mail! wen) It's been nearly a quarter-century since production stopped, and at that time the interceptor sold for a whopping 23c wholesale. Model planes, like books, follow the rule that says the more there were, the fewer there are. And the Interceptor was once available in practically every drugstore and five- and-dime in America.

But enough prattle. Either you're crazy enough to want to build one of these things, or you're not. If you qualify, read on. Walker used soft balsa throughout on the Interceptor, to keep the weight down (there are quite a few aluminum parts, remember). If you intend your model for flight and not merely for display, you should do the same..." 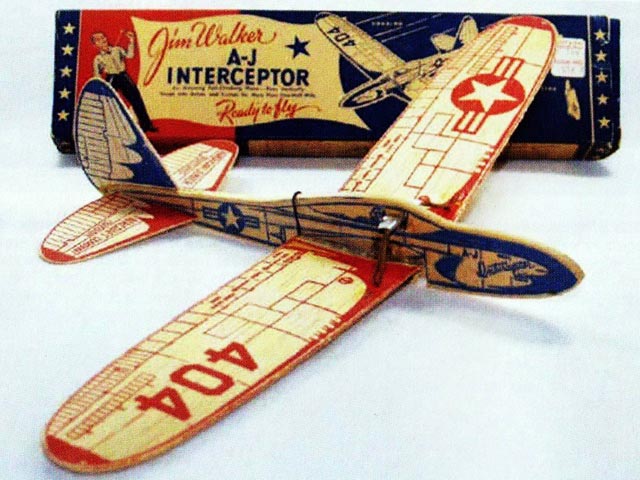