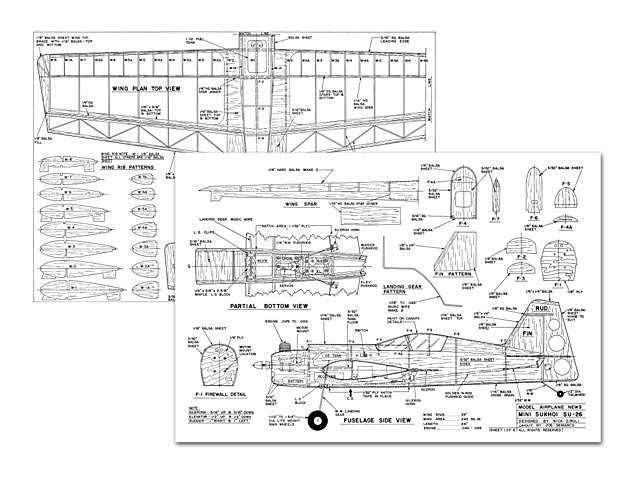 Quote: "THIS AIRPLANE certainly doesn't require a detailed introduction. It has been written about in all the aviation publications and modeled in almost as many sizes as there are engines to suit them. I first saw the SU-26 in a small three-view that appeared in the January '85 issue of Air international. Thinking that it might become a very popular aerobatic model, I started to develop a set of plans for a version with an 82-inch-wingspan. But I never got past the roughing out stage, and I never built the plane. I should have followed my instinct and completed the plans because the model did become very popular. The December '87 issue of Model Aviation had an excellent article about it.

Scale documentation catalogues offer three-views and photos of other versions of the SU-26. Bob Banka's Scale Model Research catalogue has more than a dozen listings for the SU-26. Alain Proteau, proprietor of Repla-Tech International, has just released a new catalogue that contains a wealth of information. There are hundreds of side-view drawings of all types of aircraft, well-known and obscure, and six three-views of the SU-26. I highly recommend both catalogues as excellent documentation sources for your next serious scale project.

1/2A POWER: I don't consider this version of the SU-26 a serious scale project. Its design is based on its engine: the Cox .074 Queen Bee. There's no mistaking this for anything other than a Cox engine, but there are some differences between it and other Cox engines. It has a very attractive, effective expansion-chamber muffler. Like most Cox engines, it has a rear reed-valve intake system, and a simple but effective barrel-type carburetor has been fitted to it. The usual glow head has been replaced with a standard short-reach glow plug. No special clips are required to start the engine. It's mounted on side lug mounts, and a drilled plastic mount is also available.

JUST DUCKY: The SU-26 requires a mini airborne radio system, and the Hitec Focus 4 FM easily meets this requirement. The Micro 535 receiver and four HS80 servos are among the smallest available. This transmitter doesn't have dual-rate switches; in their place are front-panel adjustment controls to set the servo throws. This way, while I'm flying, I can have someone adjust control sensitivity until I'm comfortable with it. When you're satisfied with the setup, the linkages can be readjusted and the servo travel can be dialed back up to take advantage of the full servo travel. This should be done if any of the control-surface movements have been cut way down. I rarely change rates after the first few trim flights, so this works well for me, and there are fewer switches to deal with.

Although I use a 4-channel setup, there's no reason why two channels, ailerons and elevator, couldn't do the job. The model would be a couple of ounces lighter, and I think that it would perform well with a Cox TD .049 or an .051.

One item that I wasn't sure I'd like is the new Rub'r Duck antenna. It takes a few flights to get used to the feeling that there's something missing or that you've forgotten to extend the antenna. Flying the small Sukhoi fairly close in most of the time never presented any range problems, but what would happen at a crowded fly-in or contest?

I found out when I put this receiver in my Giant Taube and with the Rub'r Duck-equipped transmitter, flew at the Old Rhinebeck Jamboree at Rhinebeck, NY. This two-day contest has six flight lines in three groups of two. Most of the time, there are six planes in the air. I was flying from one of the center flight lines, and I had to fly close to two other flight lines at opposite ends of the field. Even in this very busy environment, I didn't experience any glitches or control problems. I thought that this was a valid test; it proved to me that this antenna does work as advertised.

CONSTRUCTION: The Sukhoi SU-26 was designed to be a small, relatively simple, aerobatic plane with eye appeal, and it isn't difficult to build. Covering the top of the fuselage is the most difficult task, and that's easier than it looks.

For maximum maneuverability, I made all the control surfaces extra-large. Its lightness and large surfaces make the model fly smoothly and perform aerobatics well. The prototype weighed 20 ounces; this was achieved with carefully chosen off-the-shelf balsa.

With the .074 Queen Bee, performance is good. A larger, light .09 or .10 would be outstanding. For those inclined, I think that the Sukhoi would make a very good, small, control-line, stunt model. The moments are almost ideal for this. A bellcrank would have to be linked to the flaps, and elevator would have to be added, but everything else would remain the same. If you're into it, you'll know what to do. Just a thought.

WING: Construction must begin with the wing because the fuselage is built around it. Join the spar halves against a straightedge so that the tip and the center legs are in line. Use hard, 1/16 balsa for the joiner. The joiner side is the trailing-edge side of the spar. Working over the plan, attach ribs W-1 and W-8 to the spar. To produce an accurate wing, you must build it on a flat surface. Fit the ribs in place on the spar, but don't glue anything yet.

When I build wings of this type, I prefer to pre-assemble the trailing edges first. If they're made straight, it will almost guarantee a true wing. Using scrap balsa, make eight assembly jigs of the same' shape as the aft end of rib W-4; these will act as temporary fixtures - four on each side - to hold the top and bottom open at the correct angle. Pin the wing to a flat surface to dry.

When the finished trailing edges are put into place on the ribs, the leading-edge notches should line up. Glue the ribs to the spar and the trailing edge. Add the 3/16 square leading edge and the 1/8 square top and bottom spars. Fit and glue all the false ribs (W-1A to W-7A) into place. Sheet-cover the center section with 1/16 balsa, as shown on the plan..." 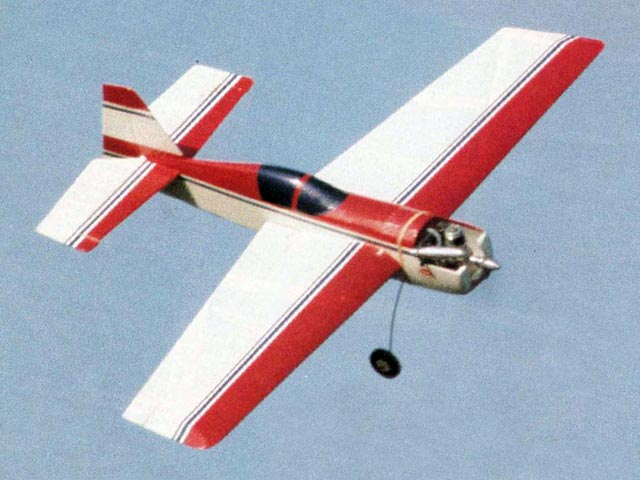 Scanned article pages are online at http://www.rcgroups.com/forums/showthread.php?t=942754
SteveWMD - 18/06/2014
Steve, Here is a picture [pic 007] of my Mini Sukhoi built from the same plans recently posted. I built it as designed for the TeeDee .09 but never installed that, and finally ended up covering it with laminating film, spray painted it and installed an Avionics Gust MS motor (1820 Kv)...with an all up weight of 13.6 oz (w/o the battery) it flies really well. She has the layout of an old control line stunter really. My only addition was the top hatch cover for the motor.
Dave - 23/06/2014
Add a comment