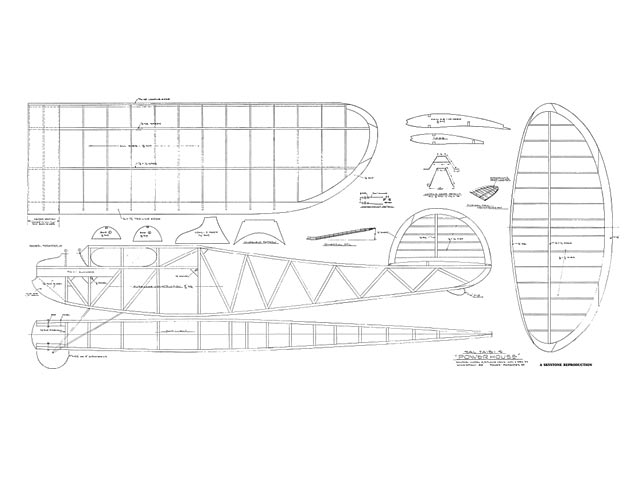 Quote: "This business of 'packing' power in ships has long been carried to extremes. Engines of a quarter - or even a third - horsepower have been built into tiny ships, giving them a startling climb, but seldom if ever does the glide match that stupendous rise under power.

We have always figured that, given enough power to obtain a good climb, a big ship had considerable advantage in the glide. We recall seeing a pilot and a mechanic (from an adjacent airport) standing near the starting line when we started the motor of the Powerhouse in a recent meet. The pilot turned to the mechanic and said, in a know-it-all manner: There's a big job. Sloppy climb, no power.

He almost ate his words when the ship was launched. In twenty seconds the Powerhouse had gained tremendous altitude. When the motor cut out, a strong wind carried the ship off the field and despite an excellent flight we had no joy in our hearts for the plane was lost. We hired a Cub to look for the job from the air, but to no avail. Our only consolation was that, at last, we had developed a fast climbing large gas job, and as such we now present - The Powerhouse.

Just a brief history of the ship: In the first appearance of the Powerhouse, at Creedmore, L.I. on February 12th at a contest sponsored by the Metropolitan Model Airplane Council, the ship did 6:04 out-of-sight, and took first prize in the Class C group. Later it took first place in the Haaren High School Model Airplane Contest, doing 2:35 for the best flight of the day, despite a 30 m.p.h. wind. Equipped with floats the ship took first honors in the first annual Eastern States Gas Model Seaplane Contest on August 20 at Lake Hopatcong, N.J., averaging 1:07, establishing a new world's record for gas model seaplanes. In addition the ship has taken a number of other prizes in eastern contests. Four foot, five-foot and six-foot versions of the ship, powered with Class B and smaller Class C motors (Browns, Dennymites, etc.), have also made fine showings and won several prizes.

In the first place a big ship is more stable, responds to adjustments more easily, and is less inclined to be critical and cranky. A big ship has but one disadvantage... it's a trifle hard to transport. Otherwise, give us a big ship that can really take advantage of a thermal and make the most of any altitude it may get.

The Powerhouse represents a development in design, and as is the case with most models, it took almost a year before the design was finally perfected. In contest work we had always noted the failure of planes with large wing spans to obtain a sufficient altitude. Of course, once they did get 'up there' they performed beautifully, but the difficulty lay in the climb..."

Update 15/11/2014: Replaced this plan with a full size version, thanks to JJ. Here is a faithful full size plan for the original 84in Powerhouse, scaled up from the drawings as published in November 1939 MAN.

Article.
Article (FM).
Original drawings, scan. Note this is not a full size plan, this is a scan of the magazine pages as originally printed in MAN Nov 1939. 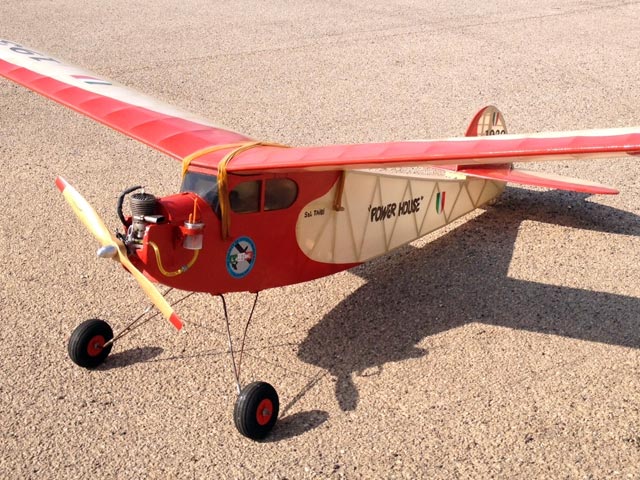 Hi Steve. I would like to comment on the Sal Taibi Powerhouse plan. I was given a 2.5m wingspan Powerhouse when I was a teenager. It was covered in nylon and fell apart when I tried to recover it. A quick rebuild, and I've been flying the same plane for 20 years now [see more pics 003 - 006]. The original free flight concept was abandoned and a functional rudder and elevator was added. My flying family renamed the Powerhouse - it's now affectionately known as 'The Bus'. Guess the bulky fuse and red colour helped that one. This plane taught me the basics of RC flight. Mostly used for cruising the sky just before sunset (Dad's favorite), long distance runs or high speed low passes (with full down elevator) this is still one of my favorite planes. The Bus has a 60 OS 4-stroke for power. Most of the older modelers have strokes when I fly the plane into barrel rolls (45 deg rudder after quick up elevator) or prop-hangs or slow loops. I've managed inverted flight too, and then suffered the chidings of the ancients. This is without doubt the most fun I've had with 3 channels. The larger wing span with the old 4-stroke make for a stable flight and it's easier to see as I'm aging with the plane. With so many 'Old Timer' plans available, I can say that this is a worthwhile plane to have in any hanger.
BryanMoose - 16/07/2014
More pics [007, 009] added, thanks to Luigi.
Mary - 21/01/2016
Please add this photo: my 88" Powerhouse, restored from a basket-case, powered by a ASP52FS, covered in Solartex [more pics 010].
SybrandStrachan - 11/02/2019
My POWER HOUSE has flown many years as electric. On OUTERZONE are still the old photos as electric. Now it flies as spark equipped with Super Cyclone [model photo & morepics 011]. Now is a most interesting job. Oily hands...
Luigi Carlucci, Italy - 04/09/2019
Power House, built from your plans [pic 012].
David Wartel - 09/07/2020
Add a comment