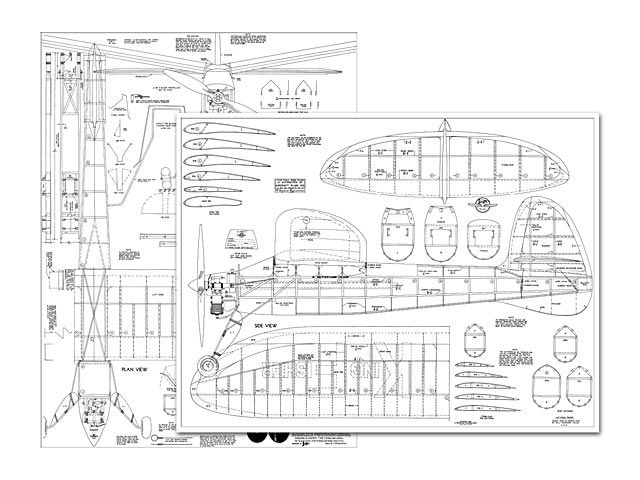 Quote: "Gasoline powered model. Duration and contest type flying gas model for 7/8in bore motor, 12 or 14in propellor having 5 or 6in pitch. Designed by Joe Ott. Dra's by T Perzentka ...traced from an original plan by Bill Thompson 1-30-65."

Quote: "Note: for seaplane flying we advise increasing the wing span from 5 to 6 ft to offset the additional weight of the floats, this may be done by adding 2 extra 'A' ribs to each side of the wing at the same spacing as the other 'A' ribs."

Quote: "Created for those who want a sturdy job for everyday flying, this ship was made for both wheels and floats. The Kingfisher, by Joe Ott.

The Kingfisher is designed to serve a dual purpose - a land model and a seaplane model. The wing loading averages less than eleven ounces per square foot of area for either plane. The land model has a sixty-inch wing and the seaplane model has a seventy-two-inch spread. The construction throughout is exceptionally sturdy, and hard balsa is used for the most part. Hardwood veneer is used at three main sections of the fuselage. The first one is at Section No 1, where the landing gear is firmly attached to the body. The second, at Section No 2, where the lending edge of the wing is held against the top of the cabin, and the third strong point is at Section No 6, which holds the rear wing hook and strengthens this part against the pressure of the rubber band hold-ing the wing.

Four complete test models were built until the final shape and construction methods were decided upon. In the original design the wing loading was to be held at twelve ounces per square foot. This weight would give a little better stability on breezy days and the climbing angle of a heavier model would be more gradual and, in a sense, similar to that of a full-size airplane.

The landing gear of a model of this weight must be strong enough to withstand the force of rough landings. By the use of a lifting stabilizer, longitudinal stability is slightly increased, since we have two points of suspension - the wing and the stabilizer, somewhat similar in a way to a tandem type of airplane. This style of lifting tail, or one along these lines, was employed a few years back on the Handley-Page bomber, and is common on most contest models. Of course, where the tail takes the place of a small wing, the center of pressure of the wing itself must be farther forward than usual, and this should be considered when balancing the model for flying. The position of the center of pressure should be one third back from the leading edge.

Body Construction. The body construction begins with the assembly of a rectangular section as illustrated by the heavy lines of the drawing. This method simplifies the starting of a model and permits easy and fast construction. Two identical sides are constructed first of 5/32 x 3/16 balsa. The framework is 2-1/2 in deep from Formers 1 to 6. From Former 6 the depth decreases to 1-1/2 in at Former 14. Since the top of this framework is perfectly flat, it is easiest to construct the fuselage when in an inverted position on a flat surface..." 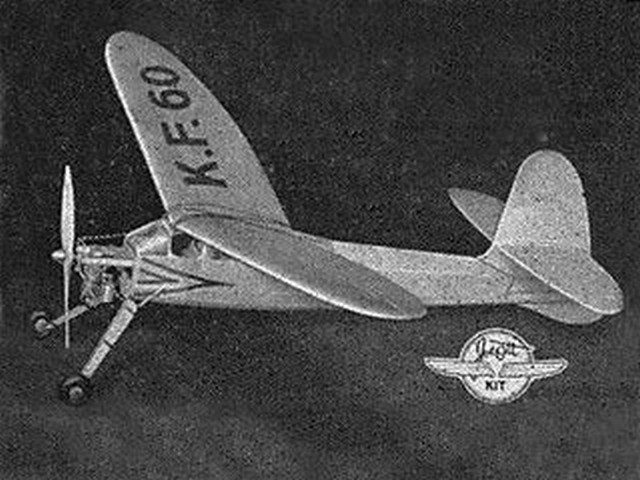