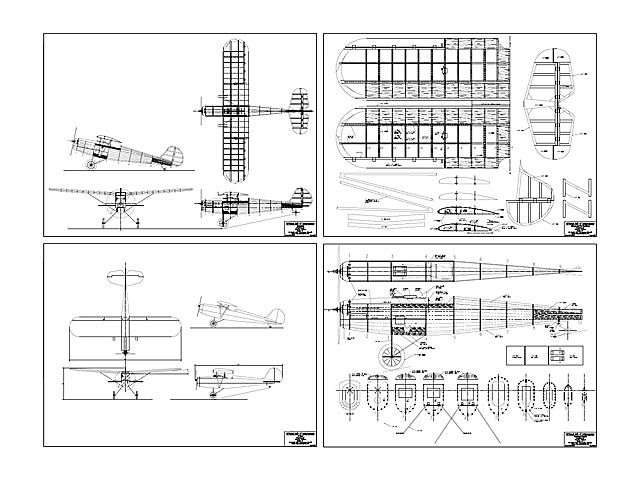 Frog Interceptor MkIV Parasol. Radio control sport model, for electric power. This is a modern-day plan, but the subject is an interesting vintage model aircraft.

Quote: "I've been scratching around for a candidate for BBCC5, and every time I think I've found one, I discover that there's 8 build logs of 4 configurations, and 2 sequels of the bird... So, I started looking down through the list of airplanes in the Flight Archives tome compiled by Lord Librarian Terrell along with the plans on OuterZone, and found this little girl. It's apparent she was a 1930's rubber powered Frog Kit of a fantasy fighter aircraft named the Wilmot Mark IV Interceptor, but there doesn't seem to be any drawings (or formers... LOL) other than the 3-view... to that end I've developed a set for a 60" version (approximately 1/8 of the 'proposed' scale). You know how I like one-off's and/or never-built's I really like her, but (there's always a 'but') I think she looks better as a parasol with spoked (yeah, yeah, I know) wheels than as a shoulder wing with smooth rims. I've attached the drawing sets of both the original shoulder version and the parasol version along with the 3-views of both variants... of note, the fuse bears a striking resemblance to a Thunderbolt. I'm not sure if these meet the requirements for posting, but if they do, you're welcome to them..."

Quote: "Steve, I revised the drawings to show a slightly more narrow fuse (less than 4in), a better aileron setup, and true wire lengths for the undercarriage... I promise to quit messing with the drawings now!"