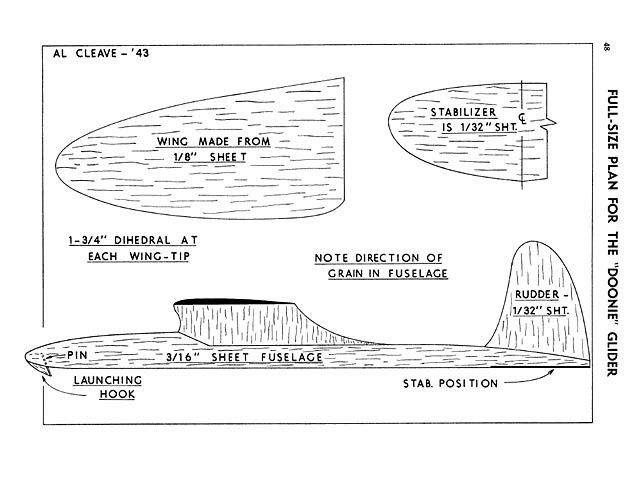 Quote: "NEARLY every model builder, at one time or another, gets the urge to build some type of hand-launched glider. So for this reason, we are presenting a rather small glider with flight characteristics next door to amazing. Because of its rather small size, it is not beyond the reach of the builder whose supply of balsa is getting low.

When flown with a catapult, which is explained later in the text, the original Doonie reached an altitude of nearly a hundred feet, and had an exceptionally slow, floating glide. If stalled at the top of the climb, it merely mulled forward, gradually coming back to level flight, and only losing a few feet of altitude in the entire pullout. It is also very spirally stable when properly adjusted.

Some builders might object to the pylon-type wing mount, saying that it causes excessive drifting in a breeze. However, experiments have shown such an increased performance with this type of wing mounting, that a slight bit of drifting, if there is any is more than compensated for by the more stable flight. No exceptionally high times have been made because all flights have been made in the dead air of evening, with no chance for thermal flights.

Before actual construction is begun, trace the plans on stiffpaper or light cardboard, and cut these out with scissors, to be used as templates. Trace both sides of the stabilizer, as only the left half is shown on the plans. Next. select a piece of hard 3/16 sheet balsa and trace the fuselage outlines on it, using the template. To save balsa, 1/8 sheet pine or basswood may be used for the fuselage. Note that the wing pylon is made from a separate piece, and that the grain runs vertically, to insure a strong wing mounting. Cement the pylon to the fuselage, making as neat a joint as possible.

After the glue has dried, cut and sand the entire body to a streamlined cross-section. Be sure to leave a flat section at the point where the wing and stabilizer are attached to the fuselage. Add the launching hook at this point if the builder desires to use the catapult type of launching. This is composed of a headless pin pushed into the fuselage at the point shown on the plans. Add the 1/32 sheet fairing in front of the pin to strengthen it..." 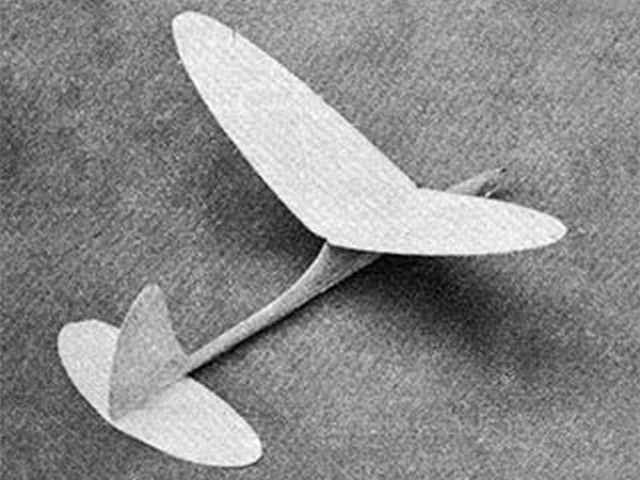