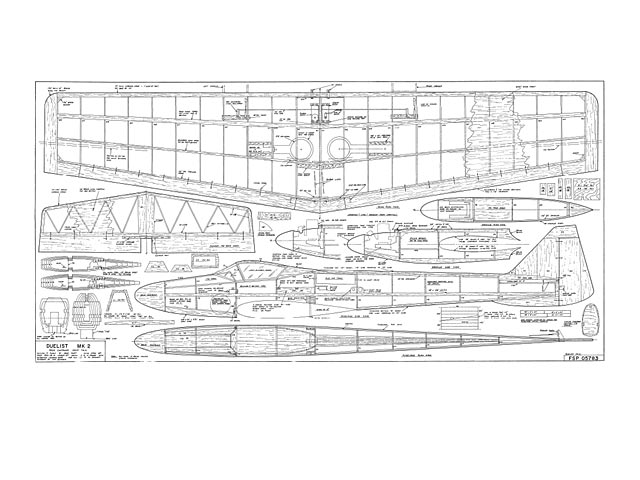 Quote: "The first Duellist (oz5962) model although heavy, flew extremely well and had only minor problems. The Mk II here presented has been refined slightly, both in its force arrangement and in structural design, and can be made with confidence by the relatively inexperienced R/C fan. I would say that, if you can build and fly a Kaos, you are ready for this model.

Some of the more interesting aspects of the Duellist II's design might merit some explanation. For instance, I did not bring the nacelles as close as possible to the fuselage. Normally, twins use this feature to minimize the swing which occurs when one engine quits. While I don't argue with this logic, appearance is poor. Moreover, it seems like a cop-out to design a twin and then go as far as possible to avoid an offset-thrust situation. Instead, I placed the nacelles where they looked right, and prepared myself for heavy control corrections when one burner went out. In fact, nothing violent happened at all, and only a moderate turn resulted when one engine quit. This is easily overcome by throttling back the remaining engine to about three-quarters power, and full control is maintained, with turns either way, and landing approaches are normal.

Indeed, it probably is fair to say that one of the most fascinating and pleasurable experiences is to learn what you can do with the ship with only one motor running. After you get used to the ship and come to understand its personality, you can amaze your buddies with one-engined four-point rolls, inverted eights at a near-idle, wonderful stall-turns.

Take a look at the ailerons. They are basically strip ailerons (easy to build), but are placed well inboard, compared to a typical single-engine job like a Kaos (oz6251). Thus, they are working directly in the prop slipstreams and are very powerful, despite stopping some 10 in short of the tip. Until I did this, the vibration from the wing-mounted engines kept breaking the aileron hinges at the tip end. This problem has now been licked without reducing control effectiveness.

With a wing span and area of 69in and 850 sq in respectively, the Duellist II is intended for .19 up to .40 engines. Weight is around 9 to 9-1/2 Ib with retracts. The original Duellist weighed 12 lb, mostly due to noseweight required when the CG came out too far aft.

Using .19 engines, the newcomer to R/C or to twins will have a 'pussycat'. We used the new K&B .29's (4.9cc), as the photos show, and this is enough power to pull the airplane up in a true 90 degree vertical climb indefinitely..."

Article, thanks to DavidLegard.
Review. 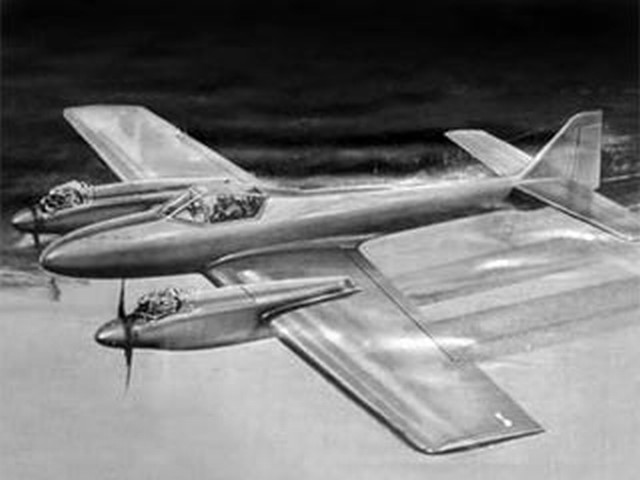 I can't find the distance from the wing leading edge to the CG but I can see that it was provided in the plans of the original magazine article; which, however is so dark that it can't be made out clearly! Do you have that info? Didn't want to use data from the other Duelist Plan # 5962 which was an earlier version and Platt said that he changed some of the parameters for the MK2, which could include the CG? Thanks in advance.
NN - 07/12/2016
I think the article scan shows it as 4 inches back from the LE. But would be nice to have someone confirm that as correct. Strange it doesn't show on this plan.
SteveWMD - 07/12/2016
I can confirm that a balance point of 4in back from the leading edge is what is shown on the magazine plan.
anon - 08/12/2016
Add a comment