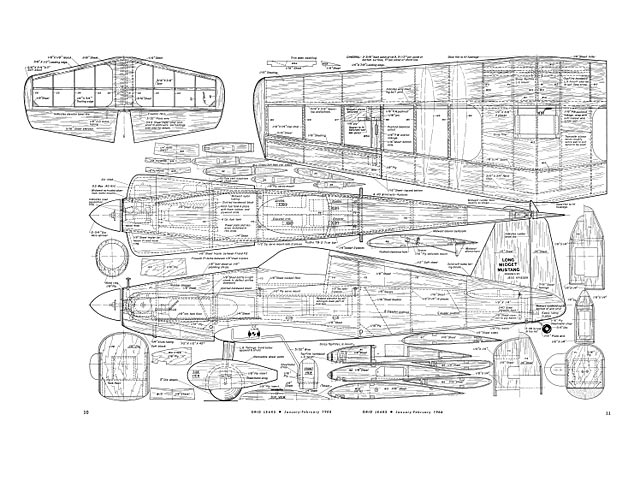 Quote: "In flier's language, This is a good one. A nice-handling Goodyear-type on a .40, it is a lively stunter as well. If light, it flies well on a .19. Long Midget Mustang, by R Jess Krieser.

When something like the new miniature pylon racing event comes along, patterned after a full-scale event, it just isn't possible for an old flying-scale fan like me to stay on the sidelines.

Once having decided to take the plunge, the question was which prototype racer would I model? Long before the advent of the new racing event I had been studying 3-views of the Long Midget Mustang and the LeVier Cosmic Wind series. Both designs, I felt, would lend themselves easily without complicated construction. Both were low wings which would enable simple, straightforward consinsetion, and allow plenty of room for in-stallation of ecittipment. However, at the time, neither of these got past the stages, as both would have been far beyond my flying capabilities. I had not even learned to fly multi at that time!

It was easy to decide on the Mustang. This decision was partially made for me by what others had done in the new event up to the time I decided to develop a ship. A number of photos had appeared in the various model aviation magazines of different versions of the Cosmic Wind, But I saw no evidence of anyone having tried the Midget Mustang, So. 1 thought I would prefer something that would be a little different from the rest. a ship that others apparently hadn't modeled as yet. The wide tread landing gear on the Mustang also influenced my choke, as 1 thought that this would greatly help ground hand-ling of the ship.

The prototype Midget Mustang was the work of the late David Long, who was Chief Engineer of Piper Aircraft at the time he designed and built the ship. The design was conceived, and the prototypes built in the 1947-48 period. He achieved a somewhat unusual combination of a relatively stable, easy handling aircraft, combined with very high performance with only 85 hp. Dave was so convinced of the stable, easy handling characteristics of the ship that he was willing to let anyone fly it who had a private license. Your Grid Leaks Editor, reported that he visited Dave at the Piper factory during the Mustang era, and that Dave offered to let him fly the ship. But being only a one-seater, he declined the offer, as he preferred a ship in which someone could check him out with dual controls before attempting solo flight. It no doubt would have been great to fly the Midget Mustang, but had I been offered the chance, probably would have made the same decision.

Dave Long had plans to put the plane into production and market it as a high-performance sport airplane, for around $5,000. He built three prototypes, two of which are still in existence: No.67 and No.9, which were sold to Luther Johnson. The third, which was the production prototype, crashed while Dave was flying it, carrying him to his death.

The two prototypes that Luther Johnson bought were the only Long Midget Mustangs to engage in racing. As racers, they were not a tremendous success even though they have enjoyed high popularity with a number of pilots. 'Never a winner, but always a placer' might be an apt description of its racing career, for the Midget Mustang seldom won, but always placed high in the heats with speeds up to 181 mph, achieved in 1952. Highest win was a 4th place in Miami in 1949, when Dave Long flew it at a course average of 166 mph to collect $1,000.

However, the Midget Mustang was not intended to be a Goodyear racer, but was designed as a high performance sport airplane with gentle handling eharacteristies. The fact that it was raced was due simply to its meeting all of the specificat ions, with a margin of 3 square feet of wing area over the specified minimum of 66 sq ft.

Our model follows the lines of Dave Long's originals, but with the landing gear moved into the wing for better ground handling. Areas and shapes of the wing, horizontal and vertical tail surfaces are exactly to scale. Fuselage width and height have been thinned slightly to decrease drag, and the nose spinner is a little smaller. Exact scale would have required an inch more height and width, with about a 3-1/2 inch spinner on the nose.

Fuselage cross-sections from the cockopit area aft have also been changed from scale, in the interests of construction simplicity. The original was more oval-shaped..." 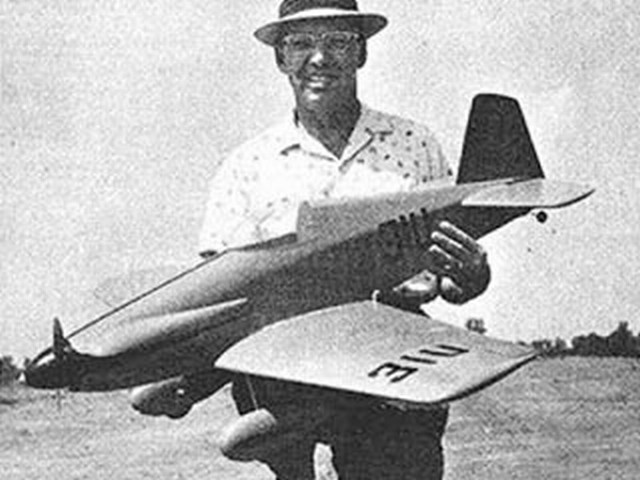