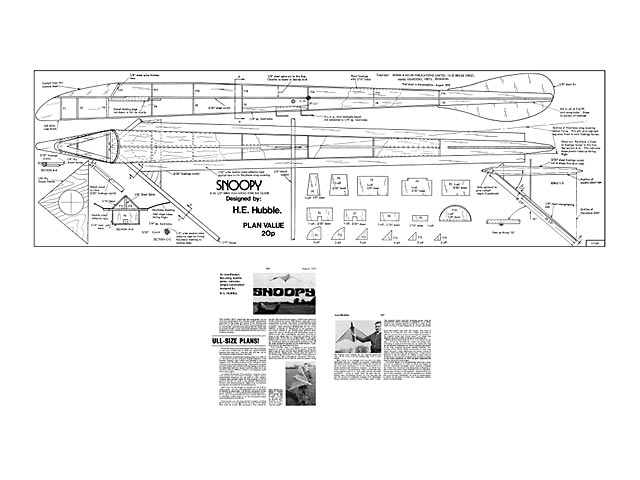 Quote: "THE BASIC IDEA behind this flex-wing glider was to meet the requirements for a tail-less model competition organised by the model club section of the Shuttleworth Veteran Aircraft Society. The factors that prompted such an unorthodox approach were mainly that the model had to be built quickly to meet the contest deadline, while the designer also has a distinct preference for the out-of-the-ordinary machine.

When the finished product emerged from the workshop, it was soon evident that at least the 'quick-to-build' criterion had been met - and also that this was one of the cheapest models built for a long time!

Construction is rapid simply because there is so little of it - no ribs to cut out, spars and leading edges etc, to be inserted. Instead, only a plain box fuselage is required together with the delta planforrn of the polythene sheet cut from a red refuse disposal bag. What could be easier to build? Flight tests revealed that the towing characteristics were ideal and that Snoopy could be towed up in all weathers without difficulty: indeed a raw beginner could tow it up in gale.

An added side benefit of the polythene wings have been their strength and resistance to damage - despite several unscheduled visitations into the tops of trees, hedges, collision with wooden fences etc, the covering is still sa good as the day on which it was applied. Performance has also been remarkably good - flights or up to 6 minutes having been recorded with thermal assistance.

Start work on the fuselage by cutting out the 3/32 in balsa crutch - see the 1/5 scale plan view of this item to identify its exact shape. Cut the 1/8 ply dowel former to size and glue it to the underside of the fuselage crutch - PVA glue is recommended for this and all other joints as although it takes longer to set, the increased strength (and cleanliness) is worthwhile.

Now cut the 1/4 in dia wing dowels to length, notching the front end 3/32 in to bring the top edge of the dowel flush with the crutch. This structure is then braced by the 1/4 in dia centre dowel support, which is also ccemented to the crutch at its centre. Add the 1/8 sheet web to the wing dowels as shown.

Two pieces of polythene for wing covering arr now cut to the approximate size, but allow a surplus - final trimming is detailed later. In view of the difficulty is finding an adhesive to fix the polythene, it was found simpler to use double sided adhesive tape..." 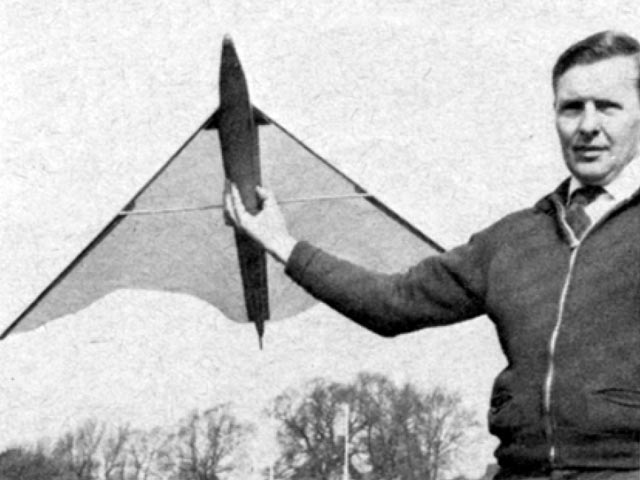