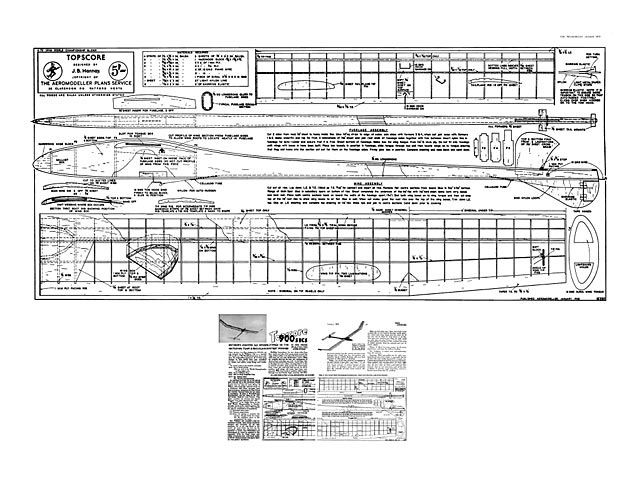 Topscore. A 78in span contest glider from Aeromodeller, January 1958.

This model was first designed in 1952-53, and was adopted by the Wallasey club as a standard A/2 model in 1954. Modifications have been made since the original first appeared, all of these being changes in detail which have been considered necessary in the light of competition experience, ie simple and positive wing fixing, auto rudder, etc.

In reaching the Trials, the model placed 2nd, 3rd and 4th on the combined results for the North Western Area, and was only beaten into top place by John Rhead of Wigan, who topped the national result on a cimbined total. Other successes have been numerous, having won for Stan Hinds the Scottish Paaload Rally for two years in succession, 1st placee at Woodford and Huddersfield, and 2nd place at the 1957 All Britain Rally for Len Hutton. This latter modeller has become the North Western Area glider champion for 1957.

'Topscore' is the design flown in the 1957 World Championships in Czechoslovakia, and is, in the writer's opinion, the best he has produced to date, The reasons for this are considered to be as follows:

(1) Increased aspect ratio.
(2) Thinner wing section.
(3) Close rib spacing to preserve the section, this also being the reason for the subsidiary spars on the underside of the wing.

The Wallasey club considers that for consistent success a basic design should be adopted and developed by all club members, for in this way faults in the model are soon shown up and can be corrected. Witness the performances of Surbiton in power, and Whitefield and Birmingham in rubber in support of this argument. With the Team event now taking precedence over individual results in World Championships, this aspect takes on even greater importance.

Building Instructions: Cut two sheet sides from 1/8 stock, and glue 1/8 square strips around the edge of this outline. Join sides with formers 3 and 4, and, when set, join nose with formers 1 and 2. Make up underfin and top fin from two laminations of 1/16 sheet, and join rear ends of fuselage aides with the fins sandwiched between.

Insert nylon line in fuselage for auto rudder, ensuring that it is free to operate smoothly. Make up box for wing tongue from 1mm ply, and bind well, but do not fix in position until wings with boxes have been constrructed. With box loosely in position, slide tongue through box and locate wings, ensuring that they slot home properly into the cutouts provided..." 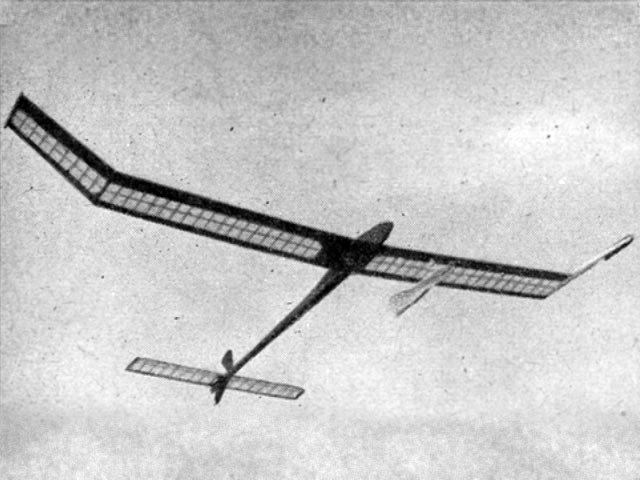 In my left hand I am holding a Topscore made from Aeromodeller plans in 1962, which won the UNESCO Trophy [more pics 003]. In my right is a Lucifer which won the Prize at All India Championship in 1962. Photo taken at the Indian Institute of Technology, Kharagpur, where I was then studying. You may want to add this photo to the Topscore Plans page where there is only one hazy flying shot. I am now helping my Grandson with Aeromodelling!
B_Mukherjee_India - 31/08/2019
Well, Mr. Mukherjee, this sounds like a lifetime achievement background, with a sequel in the making :-) It is an honour for me to extend my compliments to you, and my congratulations to your grandson for his grandfather.
Miguel Morao - 01/09/2019
Add a comment