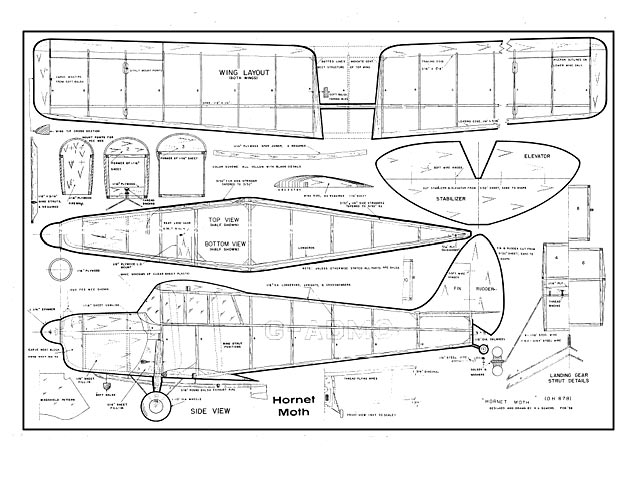 Quote: "This old DeHavilland cabin biplane was made to order for flying scale enthusiasts. Even the smallest Half A engines provide realistic flight. Different, it will be a stand-out on any flying field. Hornet Moth, by HG Bowers.

The DH.87 Hornet Moth was one of the very popular 'Moth' series of light aircraft produced during the 1930's by DeHavilland Aircraft of England. Other members of this famous family of fine aircraft were the Puss Moth, Tiger Moth, Leopard Moth and Fox Moth. The Hornet was closely akin to the reliable old Rapide, a light, twin-engine biplane which proved to be the 'DC-3 of England,' and which I have seen flying in Indo-China and Denmark as late as 1956. The snappy little two-place Hornet Moth was powered by a 130-horsepower Gipsy-Major engine and capable of a top speed of 124 mph. Clean and conservative lines make it a natural for flying scale free-flight fans. Construction is very simple and conventional.

The model is designed around any of the small Half-A engines which have proved so popular and reliable; however, I recommend very light construction and low power such as the .020 Pee Wee. Torque problems can be reduced by utilizing a larger diameter, lower pitch propeller than would be used in controlline work and, by keeping the power to the minimum required for ROG, more stability is realized and performance is much more true to scale.

CONSTRUCTION: Study the plan carefully and start on any basic part desired. I usually build the fuselage first. Use waxed paper or soap to prevent cement from sticking to the plans, and lay out the two basic sides of 1/8 square hard balsa. When dry, take them up from the plans and sand lightly on both sides with fine sand paper or a sanding block to remove excess cement. Join the sides at the tail post and at Station 6, then crack the longerons and join at Station 1, mounting the 1/16 inch plywood firewall at this time. This is a critical stage as correct alignment is very essential. Cement well and add the remaining cross members and gussets, which are made from 1/8 inch scrap balsa. Next, formers 2 and 3 are cut from 1/16 inch sheet and cemented into position. While these are drying, add the 3/32 inch balsa side stringers, consulting the plan to insure proper location and shape.

Cut the landing gear wire mount from 1/16 inch plywood and drill holes for thread binding. The main landing gear strut is made from 1/16 inch steel wire, bent to shape as shown on plan, and tightly bound and cemented to the plywood mount. When dry, place the mount in position on the fuselage and cement well. Now bend the other landing gear struts of 3/64 inch steel wire and bind and solder in position on the main strut. They are then lightly bound at their apex to fuselage members with thread and cemented, as shown on the drawing. The main landing gear strut fairing is made from soft scrap balsa sheet and sanded to airfoil shape. An emery board works quite well for this. The nose cowl may now be carved from a soft balsa block. Wall thickness should not exceed 1/8 inch.

Now lay the fuselage aside and cut the tail surfaces from 3/32 inch sheet balsa. Solid surfaces are used to compensate for engine weight and reduce to a minimum the amount of balance weight required. Sand these surfaces to an airfoil shape and lay aside with the fuselage.

Wing construction is conventional and very simple. Both wings are identical except that the top surfaces are joined at the leading and trailing edges as well as at the main spar so that they may rest flatly in position on top of the fuselage. When joining the wing surfaces, insure proper and accurate dihedral by using blocks at the wing tips until dry. Sand carefully and insure that no warps exist.

The model now is ready to be covered. Use lightweight Silkspan of the desired color and apply wet. Cover all balsa parts such as tail surfaces and cowling with Silkspan as this will insure continuity of color if pigment dope is not used. Dope the model with three coats of thin, clear, hot-fuel proof dope with several drops of castor oil added to reduce the tendency to warp. True surfaces and alignment are very essential to any free flight model.

Details are now added, such as the clear plastic win-dows, registration numbers, control surface inking, etc. Do not install the exhaust at this time as it will block entry to the lower wing mounting slot. The wheels and engine are now mounted, and the nose cowl lightly cemented in position if the engine is in an upright position as shown on the plans. If inverted, use dress snaps to attach the cowl.

Cut the rudder from the fin and re-attach with soft wire hinges. This may also be accomplished on the stabilizer and elevator if desired; however, it was not necessary on my model. Now cement tail surfaces in place, mount the tail wheel, and place the lower wing center section spar into the slot on the bottom of the fuselage. Insure that the bottom surface of the wing is flush with the lower fuselage longerons to give the required angle of incidence. Cement the lower wing in place and mount the top wing in the position shown on the plans and cement well, though not excessively. The wing struts, flying wires, exhaust pipe, and other final details are now added and the model balanced at one-third of the chord on the top wing.

FLYING: By using small balance weights and, if necessary, by warping con-trol surfaces, achieve a long straight glide over high grass. Do not attempt a flight under power until a good stable glide is obtained. Start the engine and use only enough power to permit the model to take off and climb very slowly. Observe the model's reaction and adjust the thrust line as necessary for corrections under power. Down thrust will reduce a tendency to stall and right thrust will relieve excessive torque turns to the left.

The model should take off after about a 30-foot roll and slowly climb to the left under power. A glide to the right may be achieved by using a very small amount of right rudder. By careful adjustment and trimming during the testing stages, many pleasant flights may be obtained from your Hornet Moth." 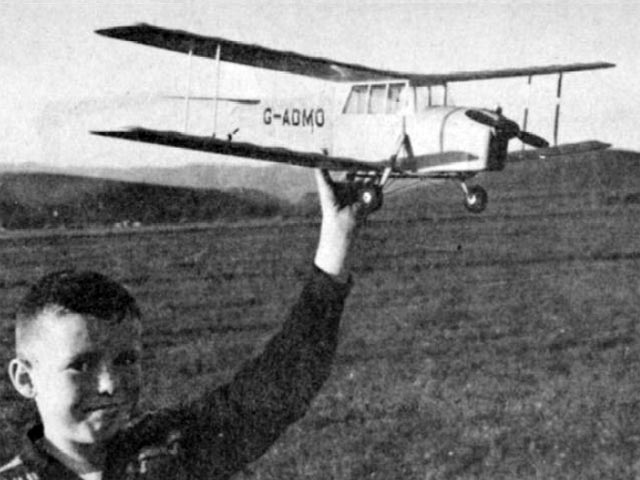