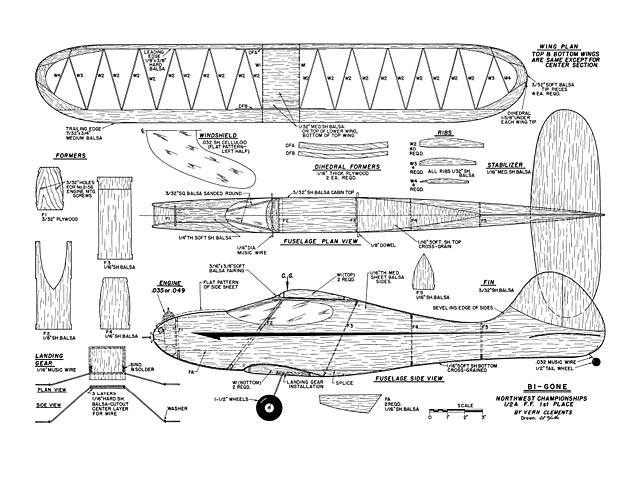 Quote: "It took more than luck for this clever little biplane to beat all the Half-A contest jobs at Jim Walker's Northwest Championships. And we're right proud to publish it.

This biplane won first place in Half-A free flight at the Jim Walker Northwest Championships. Contest performance was not in mind when this ship was on the board. It was designed with the intention of being an everyday sport flier. It logged many hours in the air just cruising around in an enjoyable realistic manner powered by a K&B .035. The flying time piled up until the .035 was worn out.

An .049 was then installed. which resulted in a hot spiral climb indicating that a realistic design capable of contest perforance. After reaching high altitude, Bi-Gone demonstrated numerous times its ability to spiral tightly in a thermal even though non-thermal glide performance is not a floating glide. Idaho modelers were aware of this ship's ability to find thermals at a recent sport flying session where Bi-Gone caught more thermals than any other ship flown during the day, one of these flights being over 45 minutes.

Bi-Gone was quite out of place 31 the Northwest Championships (with very few bipes seen at contests) and received many looks of astonishment from the modelers as is spiraled up at high speed with a snap recovery into a smooth glide path. Could it be that biplanes are not supposed to perform that well?

The main asset of this model is its consistent performance. Its geodetic w ing ribs result in wasp-free wing surfaces. The tail is cemented permanently in place so there is no chance of its getting bumped our of adjustment..." 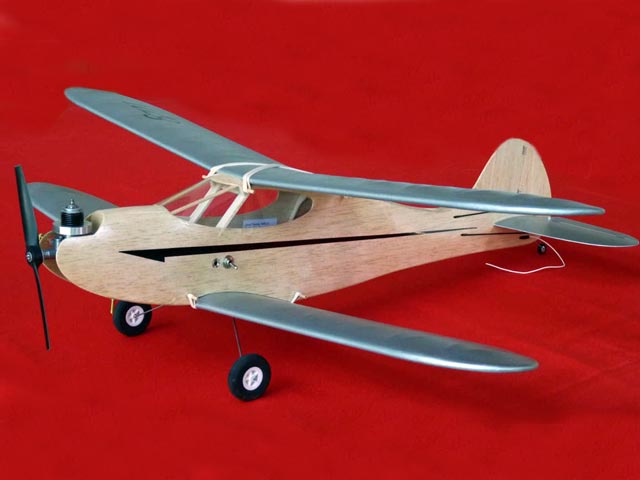 Steve & Mary - Here's some photos and a link to my RCUniverse build thread of Vern Clements' Bi-Gone free-flight bipe, your oz5615 [main pic, 003-005].
I loved the little Bi-Gone as soon as the May '55 issue of MAN came through the mail slot. I built one for my 1953 Atwood .049 but never flew it because I couldn't find a field large enough to trust I'd get it back. I was just getting into RC, but equipment was way too heavy for this little bipe. Skipping forward half a century, RC gear is much lighter (and reliable) and I got the bug to build another.
I still have that Atwood, but powered this one with a 1953 OK Cub .049 with home-built muffler and used two 5 gram servos for rudder and elevator. The Cub is perfect power, but a modern Norvel .049 would allow throttle control also. It flies great! I hand launch due to the grass field and it does nice loops from level flight. It flies several minutes on 1/2 ounce of fuel and gives a very short warning burst of power as the tank empties and leans it out, but I try to have good altitude at that point to get back to the runway, though it glides very well on its wing-cubed loading of just 5.6 oz/cu.ft. Electric power would be fine and allow throttle also, but nostalgia says "glow"! One change I'd make if I built another is to decrease the dihedral a bit to tame the roll when rudder is applied. See the build thread at: http://www.rcuniverse.com/forum...
DPlumpe - 21/09/2020
Add a comment