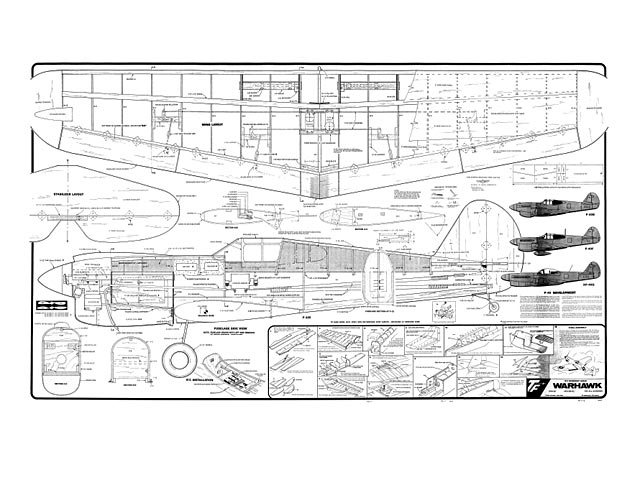 I could not resist finishing the model in the RAF colour scheme as used on the Tomahawks on 112 Squadron in Egypt, but for scale contests it can really only be built as a Warhawk. The Tomahawk cowl is quite different to the Warhawk, and as the main part of the cowl in the kit is a plastic moulding, modification would be difficult. I have promised myself, however, that after the concrete runway has modified the nose (and it will!) I will reshape in balsa to the Tomahawk configuration.

A large full-size plan is included in the kit, covered with useful hints which help to make the building simple and straightforward, and I could not fault the plan, diagrams, or instructions. I made only one deviation from the plan, making a removable hatch to the tank compartment.

Apart from that, the model is built exactly as per plan, while on the subject of the tank, there is plenty of room for a 12 oz type. Most of the die-cut parts were easily pushed out of the sheet, and only a few required the help of a sharp knife.

There are no building problems with the wing, construction is quite conventional. The wing has a symmetrical section, is com-pletely balsa-sheeted, and has large block balsa tips which have to be carved to shape. The block balsa ailerons and flaps make up practically the whole of the trailing edge and arc of large area, in fact, a warning note on the plan states that because of their large area they are prone to flutter problems if the control linkages are at all slack!

The wings have quite a large amount of dihedral, 2-3/4 in under each tip. The wing is held to the fuselage by one 1/4 in dowel at the front and two nylon bolts at the rear, the bolts screwing into tapped holes (tap provided) in a hardwood crosspiece.

A fixed undercarriage is provided, a retractable set is available which retracts to the rear, turning as it does so exactly as per the real thing. The undercarriage is canted forward slightly, and the wheel's point of contact with the ground is 3 in ahead of the CG, so the model should not tip too easily on to that plastic cowl, but I foresee a sharp swing on take-off! (Retracts should be the American Turf-Trass - Ed.)

Fuselage construction also is conventional, no problems, all parts fit snugly, including the canopy, which is easily epoxied into place. The fin, rudder, tailplane and elevator arc ready shaped from + in. sheet balsa. The tailwheel strut is held to the fuselage with a nylon moulding, the top of the strut bent over and epoxied into the rudder to give tailwheel steering.

As the whole model is sheeted, or block balsa, with no open framework, I decided to cover it with lightweight Modeispan, doped, filled and painted with Humbrol enamels. The dummy exhausts and upper cooler are plastic mouldings supplied with the kit.

I elected to use a ST.51 motor for the test flights, as this is about midway along the suggested power range, and fitted a 11 x 7 prop, although I normally use a 11 x 6 for this engine. It seemed that so much of the prop was hidden behind that large spinner that a little more pitch would be useful over the working area! The spinner is not provided, and the one I fitted is from Micro-Mold..." 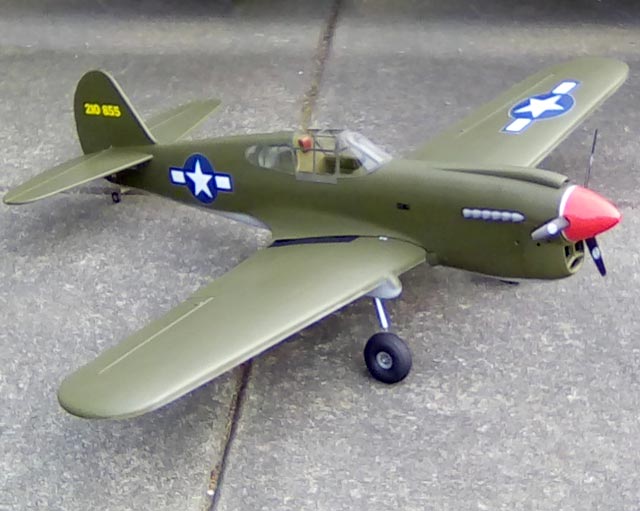 Hi Steve, I built the Top Flite P-40 you show the plan for back in the mid '70s. I think there is an error on the plan. The plans show a guide for the trailing edge of the wing to be used while the wing is under construction. If built per the plans, the wing tips get wash in not wash out, at least mine did. It made for some very interesting stalls. I liked the plane as a sport flyer, it was very easy to build and it did look good in the air. Just wanted to warn people to check incidence angles before the wing is sheeted. Here's a picture of my P-40 [see more pics 004], Enya 60 and Rhom Air retracts.
pd1 - 03/06/2014
This is the Top Flite Dave Platt P-40 plan blown up to 120% for a 72" wing span [more pics 005].
MiltOchsner - 07/11/2016
Hi, Enclosed are a few pictures of my TF Red Box P-40. I've added some modifications, but basically it's the stock kit [main pic, 006]. The kit was missing 1/2 of the flap trailing edge balsa so I had to build that area up, so... no flaps. Thank you for your great website!
Dan Owen - 27/07/2020
Add a comment