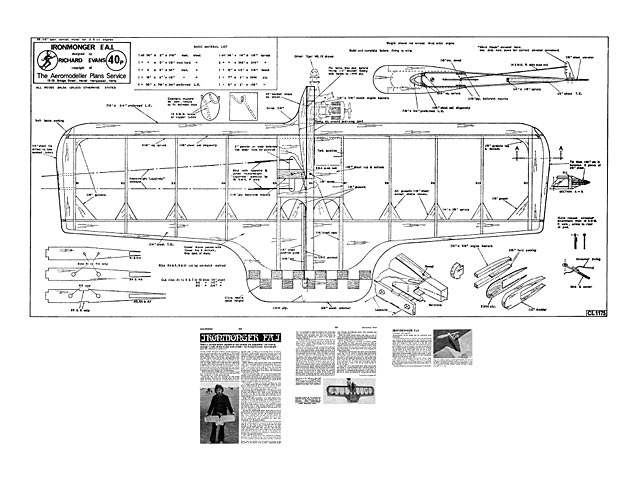 Quote: "Want a combat model capable of out-turning the opposition, yet strong enough to take all the rough and tumble? Try this hot-rod and join the winner's rostrum! Ironmonger, by Richard Evans.

IN MY FIRST SEASON of flying combat seriously, I was unfortunate enough in one competition to find myself drawn against John Dixon, who was at the time one of the better combat fliers in the country. Four minutes, four cuts and a spate of hairy flying after the beginning of the bout, I came to the conclusion that the design of my model needed changing a great deal in order to compete with the higher aspect ratio wings that were beginning to appear. John was kind enough to send me a plan of his model, which was then known as the Warmonger and my model eventually developed from this over about four seasons. It is interesting to note that Frank Dowling's Liquidator (oz9761) was also influenced by the Warmonger.

Many dimensional modifications to the original model have in fact been tried but if will only mention those that have turned out to be the important ones.

Firstly the root chord was increased by two inches which certainly improved the turning ability but also made the model very sensitive to small elevator movements and necessitated moving the engine forward of the leading edge to obtain a favourable centre of gravity. Obviously weight needed removing from the rear so all but four inches of centre sheeting were disposed of. The length of elevator was gradually cut down from 11 in. to 81 tn. in order that more elevator movement could be used without causing the model to shudder during manoeuvres.

Many different wing sections have been experimented with, but l eventually came to the conclusion that 7/8 in wing and 1 in centre section was best for all round use. I did in fact build a series of 3/4 in wings and although these were certainly fast in level flight, manoeuvring in strong winds caused them to be blown into the ground if one wasn't too careful.

The actual leading edge, which was solid on the original model, is now much lighter due to the use or hollow pre-formed wood backed by 1/16 in sheet and strips of spruce. It is with this that construction should start. At this point it is worth mentioning that all balsa used should be the lightest available unless otherwise stated.

Cut the LE to length on the plan and back this with 1/16 in sheet, setting the grain diagonally. When the glue has set, follow up with 3/16 in sq spruce top and bottom. This unit should be allowed to dry at least overnight. Turning to the trailing edge..." 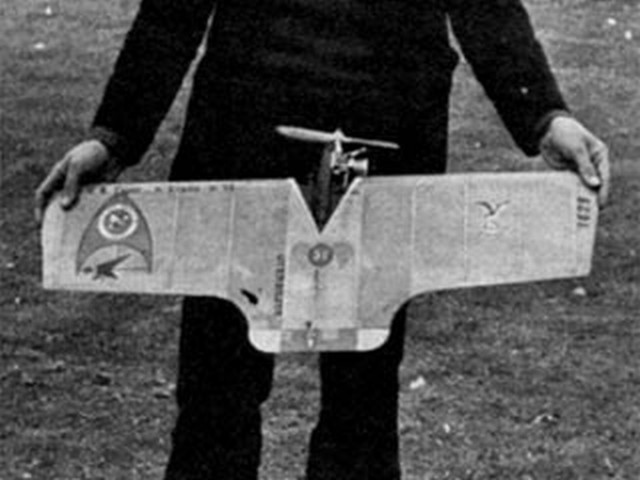 Last controliner I ever made. I used an "as twice as powerful" Super Tigre G15 glow rather than the usual Oliver Tiger diesel. Far too fast to cut anyone's streamer but great fun. Seeing it here reminds me of my long ago late teens and early twenties. It said in the article with the plan to cover both sides of the rib sheet with doped on tissue. Do it.
MarkPowell - 30/05/2014
According to his plan article, Richard Evans' Ironmonger developed out of John Dixon's Warmonger. AntonioRG has sent these two photos of the Warmonger [more pics 003, 004] and as we don't have that plan on OZ, I thought I'd share them here.
Mary - 25/10/2016
Add a comment