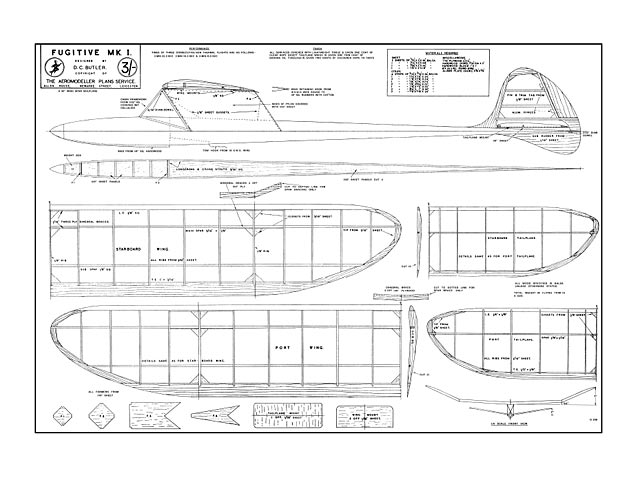 ORIGINALLY designed in the middle of January 1946, construction, though started immediately, was delayed somewhat so that eventually the machine was completed just two days prior to the pilcher Cup Contest. A test flight on the morning of the competition resulted in the machine being lost in the mist prevailing at the time, and it was only recovered after an intensive two hour search. Its three contest flights were extremely consistent, all being of just over three minutes in duration with barely a ten second variation between the times - this proved sufficient to win the competition, which incidentally was run under the SMAE Area Centralization Scheme.

The machine is in the main quite orthodox, employing as it does the high wing polyhedral type layout with dihedralled tailplane. The fuselage shape and coa-struction is, however, slightly unusual and is my way of complying with the fuselage formula yet still retaining reasonably slim proportions. Medium quality balsa is used throughout the construction so let's start with the

Fuselage: First cut out the four pieces of 1/32 sheet, which take the place of cross struts in the greater part of the fuselage; the size of these pieces is 252 long by 13/16 in wide, tapering to nil - this taper, by the way, is a straight one. Next pin down the 3/32 sq balsa longerons, being careful to cut the taper at the rear very accurately. Cement in the 1/32 sheet balsa panels and add the cross struts in the normal manner. Build two sides in this fashion and when set remove from board, sand smooth and proceed to join same with the cross struts adjacent to former No. F2. Add the third 1/32 sheet balsa panel and this is the stage at which the 18 swg wire tow hook should be fitted and bound in place. Former No. F2. should now be cemented in posi-tion and the last panel of 1/32 sheet can be fitted in. Add the remaining cross struts and former No. F1..." 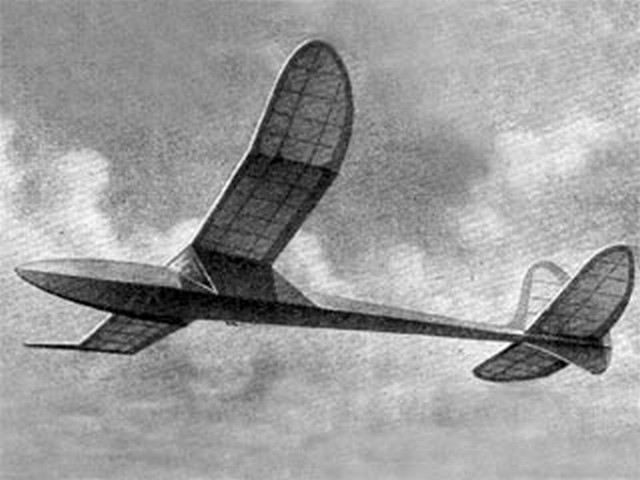