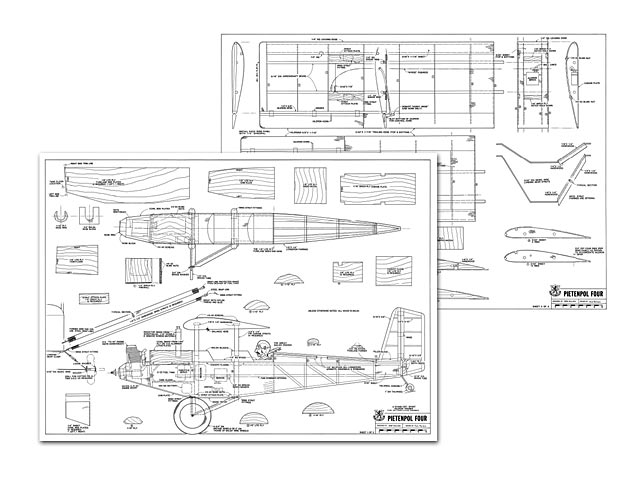 Quote: "Pletenpol 'Four' - RCM's Pietenpol #613 has been updated with ailerons and a .40 four-stroke engine. It's a whole new airplane and well worth building and flying. By Gene Wallock.

The 4-cycle craze is sweeping the civilized modeling world and why not; they're quiet and economical to operate. Several years ago, when the first Saito 30 4-cycle became available it was installed in a Pietenpol AIr Camper (oz5631) and was a real fun machine on rudder, elevator and throttle only. I decided to update the Pietenpol design to incorporate ailerons for a more realistic looking appearance and incorporate a built-up tail to simplify balancing and add to appearance. By now you must have guessed if I don't like the model's looks, I won't build it. Besides, I think it's refreshing to have an aileron trainer type model that doesn't have 'ugly', 'box', 'lil' and 'stik" in its name.

Before you start building, you'll look twice at the wing location above the fuselage and swear it has negative incidence. Well, it does, to neutralize the positive mean camber of the airfoil. In other words, the model won't balloon on you at level flight.

Construction. Fuselage: The fuselage forward end is lite ply for handling durability and the aft end is built-up balsa for lightness. Pretty straightforward stuff except the built-up aft section underlaps the forward section. Now that I've got your attention, let's proceed:

1. Cut out one each left and right fuselage forward sides from lite ply. Mark the insides with an L (left) and R (right) in dark pencil or ink, No one will see it and the model will fly funny with left thrust and a tractor propeller (I don't mean a John Deere tractor).

2. Mark the tank floor location using the dotted lines on the pattern as a guide.

4. Cut two cockpit floors, two former #9s, two strut attach plates and two servo mounts. I know the word 'two' was repeated too many times - too bad! Hopefully you have a Dremel #580 table saw or access to one because all the aforementioned parts have a common dimension: the inside spacing of the forward fuselage. If all the parts are cut on the same set-up, its very easy to build a true forward fuselage.

5. Well, it's time to assemble the forward fuselage. Use the top view as a guide to properly align the cockpit floors and strut attach plates. I use waxpaper over the plans to prevent the Zap from bonding to the paper and suggest you do the same. I glue all parts with Zap CA and go over completed assemblies with Zap CA +. In the old days I double glued with Cornet cement and never got out of the habit..." 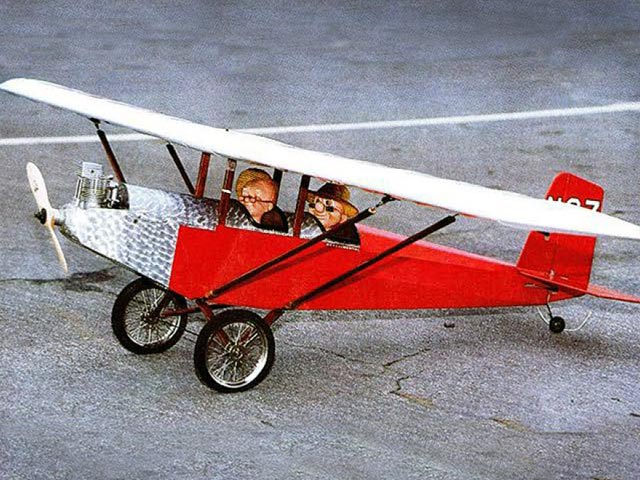