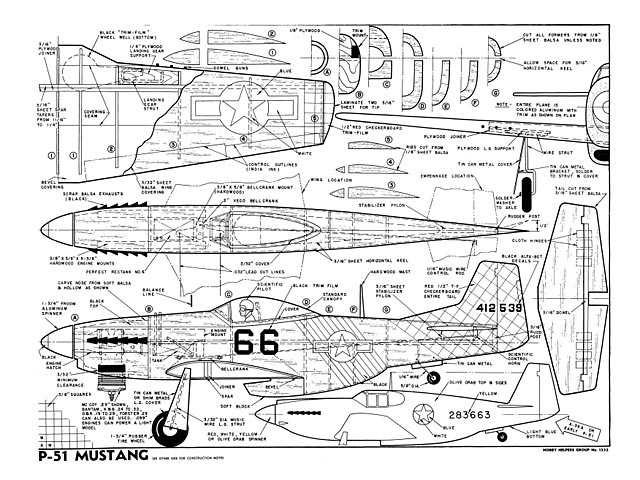 Quote: "For the first time, you can build same-scale control line flying replicas of three top-notch World War II fighters; this trio will make a fascinating project for your club or contest flying.

Triple-Threat Treat (Cont.) North American Mustang. While our Lightnings and Thunderbolts were tangling with the Messerschmitts and Zeros, a new US fighter Was in the process of development. Originally built for the British as a fast reconnaisance plane, the Mustang was first called the NA-73 'Apache.' It was then converted for ground attack use and we designated it A-36a. (See plans). Both these models were powered with the 1050 hp Allison engine. The A-36a planes were camouflaged with grey-blue bottoms and olive drab tops. The change which did most for this craft was the installation of the Rolls-Royce Merlin engine of 1500 hp. The P-51 then became the 'fastest fighter in the world' and still maintained its excellent maneuverability.

This plane is still the proud owner of the title 'world's fastest propeller-driven plane' and has performed with excellence in the Korean conflict. Countless speed records have been shattered and air races won by war-surplus Mustangs.

Update 29/01/2016: Replaced this plan with a clearer copy, this one from Uncle Willies.

Article 'Triple Threat' with text and pics, thanks to BillW. Also, a copy of the construction notes from Hobby Helpers plan #1252. 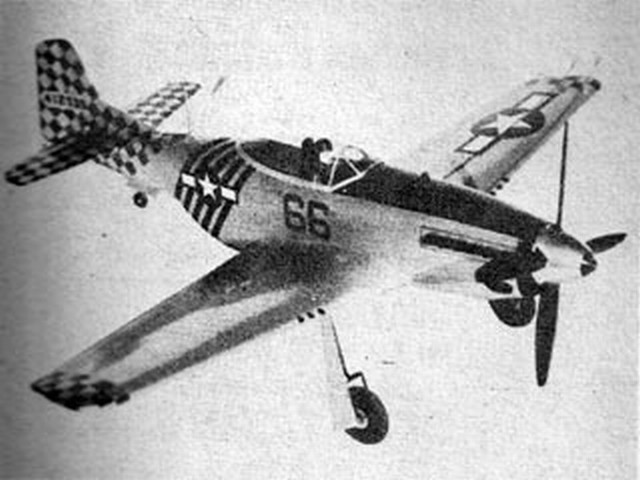